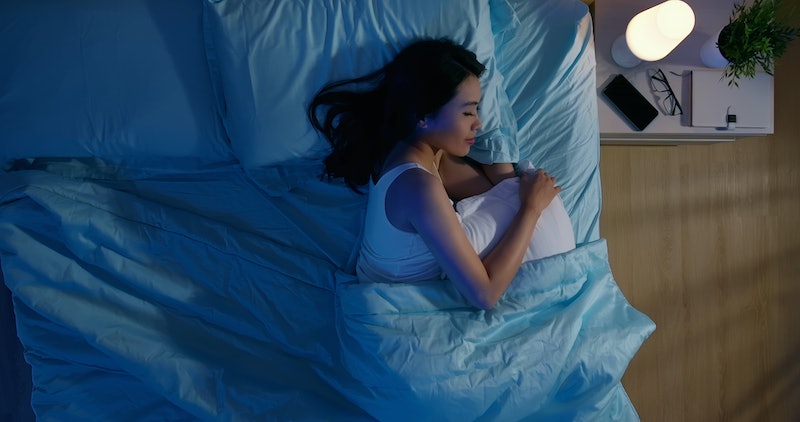 Have you ever had a memory so vivid that you swear it happened, but no one can verify it? Sometimes the line between your waking reality and dreamed experiences can blur. So can dreams cause false memories?

The short answer is yes. For starters, the human memory is pretty error-prone, says Dr. Nancy Irwin, PsyD, a clinical psychologist. The brain can distort or create memories because of our natural biases and due to outside influences like suggestion, says certified dream analyst Lauri Loewenberg. For example, you'd remember witnessing a car accident, but might not recall that one of the cars was blue unless someone mentioned it — and even then, it might be incorrect. And similar mix-ups can happen while you're asleep.

Though you may never know whether your vivid recollection of that amazing meal you had last week really happened or not, here's why and how your dreams can create false memories, according to dream experts.

Why Do Dreams Cause False Memories?

False memories can be one way to cope with unresolved trauma, according to Irwin. "We don't like to not know things," she tells Bustle. "At night, the mind might be searching for clues and answers, and it is certainly possible that the brain fills in the blanks or encodes a memory that could explain things." This can take the form of over-remembering trauma as your brain attempts to process, according to this 2015 research in the journal Frontiers in Psychology.

Other times, your brain might create a semi-false memory by distorting real recollections of trauma to protect you from emotional pain, which can happen whether you're awake or dreaming, adds Loewenberg. "The subconscious can change or rewrite the trauma to desensitize the memory so you can live in peace." Research shows this might happen on a cellular level: Your neurons can reprogram fear-inducing memories to feel safer, according to a 2018 study in the journal Science, which Lowenberg says can be a part of healing.

And sometimes it's just totally random, she points out. "One purpose of dreaming is to consolidate experiences into long-term memory," Loewenberg tells Bustle. Stuff that happened the day before can influence your dreams and make them feel all the more real. That's why lots of false memories are fairly mundane, like having a conversation with a loved one that you may have actually spoken with the day before, as opposed to seeing a three-headed dog in your driveway, she says.

Your brain is impressionable, so outside influences like your friend's perspective on a situation or watching the news can also distort your memory. Perhaps you listened to a comedy podcast as you fell asleep, and now have a memory (or is it?) about going to a stand-up show. Though there's still a lot to learn about dreaming brains, research shows that suggestive forces — in this case, that podcast — can prompt you to remember things that didn't actually happen.

False memories may also be the result of declining cognitive abilities due to age, conditions like depression, or substance use, according to Irwin. Frequent false memories may be a symptom of borderline personality disorder, says Loewenberg, and you should check in with your doctor if you notice it happening on the regular.

How To Tell The Difference

Unfortunately, sometimes you'll never know the difference between real and false memories, according to Irwin. Unless you have a witness or someone to corroborate the memory, it might remain a question mark.

The feeling of déjà vu could clue you in to whether or not your memory was actually a dream, says Loewenberg. Though the mechanisms behind déjà vu aren't totally understood, if you get the feeling that you've already experienced a moment before, it may be because something similar happened in your dreams, she notes. "I wouldn't exactly call these memories false, because it is something you experienced. But it may be a memory from your internal world instead of your external world," she says.

You can start to parse the difference between what you dreamed versus what happened in waking life by keeping a dream journal, according to Loewenberg. Record your dreams in as much detail as possible as soon as you wake up to help you keep tabs on what happened in dreamland.