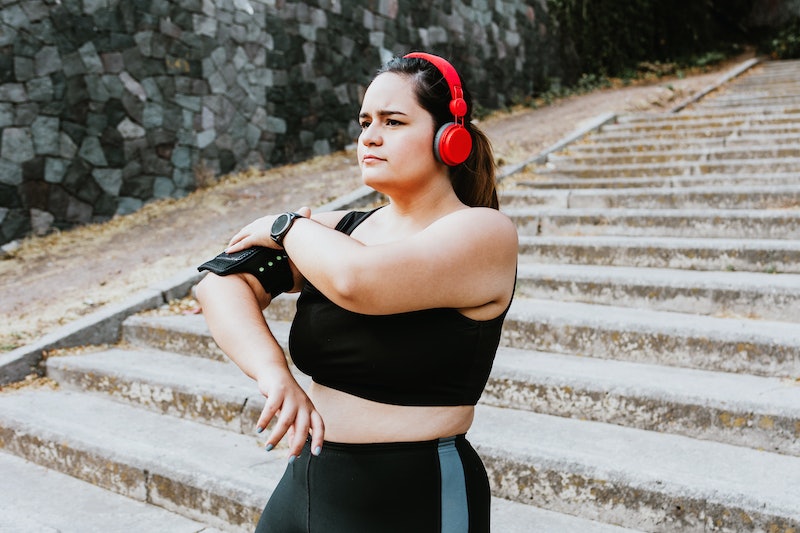 For the first 29 years of my life, I thought I couldn’t run. I’d been led to believe there were two types of people: athletic ones who played sports and could run, and people like me, for whom getting through a one-mile jog is a torturous feat. I accepted this and stuck with my trusty elliptical routine. And then I discovered Couch to 5K training plan.

A friend of mine convinced me to try the fitness program. She also “wasn’t a runner,” but had miraculously become one with the help of Fitness 22’s Couch to 5K Runner, an app based on the popular Couch to 5K running program conceptualized by Josh Clark in 1994 — who was, you guessed it, someone else who “didn’t run.” I was skeptical: I never liked running and hadn’t exercised in over a year. But, 20 months into the pandemic, my mental health wasn’t at its best. Given the stress and anxiety-reducing powers of exercise, I had nothing to lose.

Sixteen weeks after downloading the app, I not only consider myself “a runner,” but run for 30 minutes at least four times a week — in the mornings, no less — and enjoy it. It’s even helped with my anxiety. Read on for an honest review of the Couch to 5K training plan and how it has forever changed my workouts.

How The Couch To 5K Training Plan Works

The basic idea behind the Couch to 5K program is starting very, very small (on the couch, if you will), and gradually adding more time to each running session. Its simplicity makes it extremely versatile, and it’s suitable for outdoor runners, treadmill enthusiasts, or both — all that really matters is that you follow the instructions and adjust your speed accordingly.

Your first-ever run is 25 minutes long, though you only actually run for six of them: Starting with a five-minute warmup, you run six sets of short, one-minute bursts, each followed by a one-and-a-half minute long walking break for recovery. It’s these breaks that are key when you’re just starting out. Studies show that runners who train too hard and increase the intensity of their runs too quickly are much more likely to sustain injuries and ultimately burn out. Instead, the Couch to 5K training plan firmly believes that beginners gently increase their pace and allow plenty of walking breaks in between (otherwise known as interval training). This technique is not only safer but has proven to be more effective when it comes to building physical endurance, as it pushes you to run further and better in the long term.

At the end of your first workout, you move through a 5-minute walking cool down. From there, each running session becomes a little longer: There will eventually be two extra running intervals, longer running bursts, fewer breaks, and so on. In theory, once you’ve followed and completed the nine-week-long program, you should be able to run a 5k — or 3.1 miles — without stopping.

Trying The Couch To 5K Program

The Couch to 5K is the name of the popular running program, but you can find its outline on the internet or on various apps. I downloaded the one from Fitness 22, which offers a free trial or a $9.99 premium subscription for three months — I went with the latter option since that’s about how long the plan takes to complete (and it’s a very decent price compared to a gym membership).

To get started, you simply pop in your headphones, open the app, and begin your workout. It’ll be the same whether you’re outdoors or on a machine, BTW: If using a treadmill, adjust the speed to match the trainer’s instructions, or modify your pace when jogging outside. To start you off, a calm voice will welcome you and guide you through your five-minute warm-up walk.

From there, the app will ding whenever it’s time to shift gears — whether you’re to slow down from a run or take your stroll to a faster pace, the voice will instruct you what to do next. (Yes, you can still listen to music while you workout and the app is loud enough so you can hear both.) Unlike other apps that offer guided runs, this one doesn’t assign specific speeds. Rather, you’re suggested to walk at a comfortable pace (for me, that’s 2.5 mph) or run at one you feel is sustainable. The program encourages beginners to prioritize following the program and not focusing on numbers since they look different for everyone — endurance will come in time. (For context, my treadmill “run” is more of a jog and falls between 4 and 5 mph.)

This process repeats three times a week, with varying running and walking intervals. The program recommends you take days off in between, as it’s not advisable to train every day (especially as a beginner): Plus, rest and recovery days are just as important to any form of fitness as the actual training since it gives your muscles time to adapt to the newly added stress, replenish the body’s energy storage levels (aka glycogen), and repair and build muscle tissue, which all helps to prevent injury down the line. You’ll likely find that after a few rest days, you’ll return to running feeling even stronger than before.

After each run, Couch to 5K then surveys how you felt during your workout via a sliding scale, complete with emoticons: Was it too difficult? Too easy? Just right? Based on your answer, the app “optimizes” the next workout to match your level. Sometimes this means pushing you forward a workout or two, though I continually “optimized” backwards as a beginner. And that’s OK — the app is meant to be tailored to suit your specific needs.

Despite having technically finished the full program, I’ve kept my Couch to 5K app and continue to use it. I still enjoy running with its soothing instructions, and it provides supplemental strength training, stretching, yoga classes, and more elements that round out my workout routine. These are actually really useful, too: Studies show that yoga helps runners’ performance, and strength training is similarly beneficial for long-distance runners. Committing to these alternative forms of movement builds strength and endurance in different ways, ultimately making subsequent runs feel much easier — and therefore less of a drag.

Should You Try It?

Whether you want to try running and don’t know how to start or simply want some guidance while training, this is the app for you. The Couch to 5K’s achievable program worked for me. Nowadays, running has become an imperative part of my wellness routine. I genuinely look forward to my workouts and have noticed a significant shift in my moods and overall health since I started the program. I’ve yet to officially run a 5K, but that’s not important to me: I set out to become a consistent runner, and that’s what I did. Maybe I will someday, but your well-being is a marathon, not a sprint.

More like this
10 Primal Movement Exercises That'll Improve Your Mobility
By Carolyn Steber
How Many Burpees Should You Do Per Day? Here’s What Fitness Trainers Say
By Carolyn Steber
The 11 Benefits Of Aerial Yoga, According To Trainers
By Carolyn Steber
Storm Reid Is A Morning Routine Girlie
By Carolyn Steber
Get Even More From Bustle — Sign Up For The Newsletter
From hair trends to relationship advice, our daily newsletter has everything you need to sound like a person who’s on TikTok, even if you aren’t.