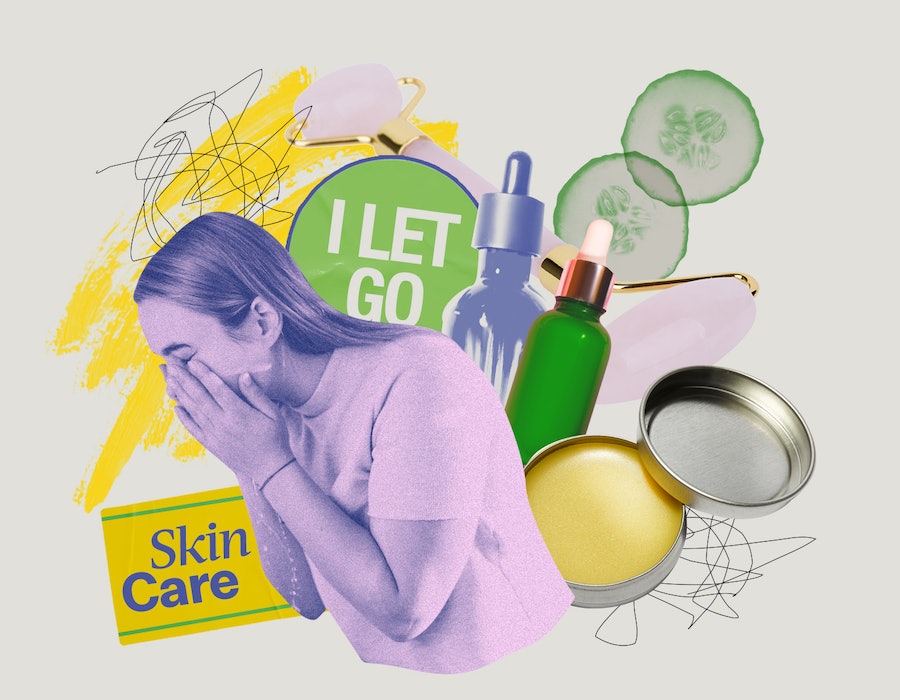 I used to say I had “bad skin”: blackheads, hormonal breakouts, bacne, cystic pimples. As a teen, I used the home remedies suggested by YM magazine, like toothpaste dotted on zits with a Q-tip. As any girl who went to high school between the years of 1995 and 2005 will tell you, this for the most part caused acne rather than cured it.

By my early 20s I had entered a phase of resignation. I owned almost no beauty products, and when my face felt a little dry, I rubbed it with random body lotion. My skin had its ups and downs, some months when I had a lot of breakouts and others when my skin was pretty clear. The biggest difference was that I just didn’t care.

Things changed when I turned 25 and fell under the influence of YouTube “beauty gurus.” I was living in a strange, giant city where I knew practically no one, and these women made me feel like I might be able to remake myself in their image: glamorous, competent, and surrounded by products. I started piling on makeup the way that they did, but in the process I destroyed the uneasy equilibrium I had reached with my skin — little pustules popped up in the hollow of my cheeks and huge, painful cysts formed on my chin. I lacquered on even more foundation and concealer, which of course necessitated an equally byzantine skin care routine to dismantle it all.

There were oil cleansers, foaming cleansers, exfoliators, micellar waters, toners, serums, oils, sunscreens, and moisturizers. Eventually I was doing an eight-step Korean skin care routine, a ritual that was certainly soothing, but it was overwhelming, too. It took only five or 10 minutes all told, but it was the sheer complexity of it — having to remember what came after what and analyze how well I thought it was working, when all I wanted was to crawl into bed.

I took a particular giddy pleasure in the harshness of exfoliation: I remember one guru raving about an exfoliating pad doused in alpha and beta hydroxy acids, which I bought immediately. A few weeks later, she made a video about “repairing her skin” after this same product had given her breakouts and rashes.

I didn’t know it then, but I was nearing the end of my time in beauty land.

Was I really caring for my skin, or taking out my aggression on it? Despite all my efforts, my skin only got worse in a dance of one step forward, two steps back, a glimpse of progress that encouraged me to try again, try harder, buy more. In the end, skin care felt like another joyless body project, very much like diet and exercise regimes — something to tweak endlessly, something to spend too much time and money on, something that gave me an illusion of control. Something that is expected of women, and rarely of men (I know very few men who even wash their faces every day).

In the summer of 2019, I abruptly stopped it all — no more serums, no more scrubbing, no more moisturizer, not even any face washing. My skin cleared up immediately. I was amazed to find this was still true after I started wearing a little makeup again — tinted moisturizer with SPF, blush, mascara, lip gloss. I applied it in the morning and never washed it off, and my skin was fine. In fact, the only times when I would break out were the rogue nights when I did wash my face.

Maybe eschewing face washing cleared my skin, or maybe it was turning 32, the age my dad was when his acne went away. He claims it was from lying on the beach and letting the sun dry out his skin, which I suppose might be true. Or it might prove that we are not the best judges of correlation and causation when it comes to our own bodies. I used to be so confused about whether my skin type was dry or oil or combo, since it seemed to be all of these at once. Now I see that it was always normal, meaning that it is normal for your skin to freak out from too much product, too much scrubbing, too much poking in the mirror, too much worry and despair.