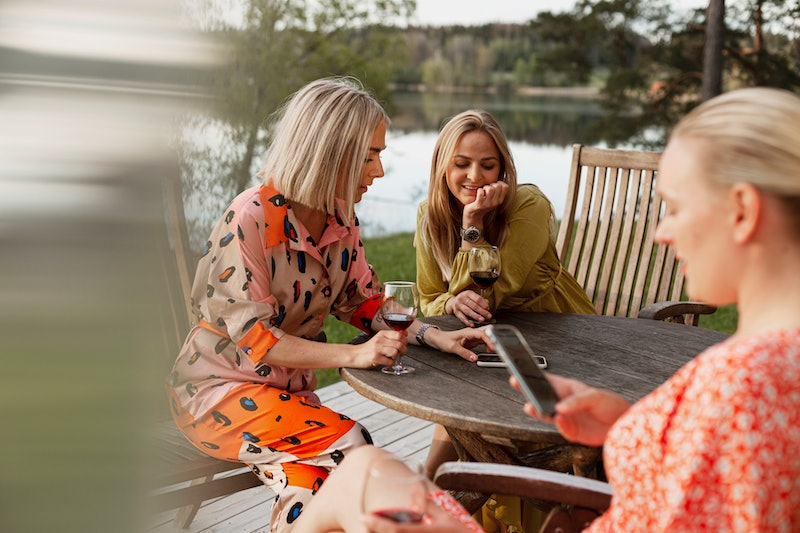 In early June, Debora, a 28-year-old publicist from Florida, hosted friends from out of town for the first time since the pandemic started. She was still recovering from their weekend of drinking a week later. “It completely messed up my sleep,” she says, adding that she’s felt more sluggish than usual all week. “I want to give it at least a few more days before I have a drink again.”

Getting drinks for work was a nightly occurrence for Debora before the pandemic, but as her pre-COVID levels of social drinking have resumed, she’s finding that alcohol is hitting her differently than it used to. Though alcohol sales rose dramatically in the last year, and 35% of millennial women reported drinking more than they did pre-pandemic, 22% actually drank less than they did in the Before Times, according to a survey conducted by OnePoll for Bustle. That 22%, like Debora, now has to learn how to drink socially all over again.

“For people who don’t have alcohol use disorder, I think we will see an increase in intake [as things reopen] — and some care has to be there, especially for younger individuals who may not have tolerance,” says Dr. Michael Fingerhood, MD, the director of the division of addiction medicine at Johns Hopkins University. “They can put themselves at risk for drinking the same amount of alcohol today that a year ago didn’t cause them trouble.”

Mina, did not have a single drink between March 14, 2020 and May 30, 2021 — and even then, it was one glass of champagne during a girls’ trip with her childhood best friends. While the 28-year-old is usually based in Washington, D.C., she decamped to her parents’ house in South Florida to ride out the pandemic. Her D.C. life as a communications professional revolved around happy hours and dinners out; she regularly felt obligated to keep up with her peers’ drinking despite not loving the taste of alcohol. Her parents, on the other hand, don’t drink, so while bunking with them, she didn’t either. “It was so freeing to not have to worry about drinking,” Mina says of her pandemic abstinence, where before, she felt self-conscious about not wanting to binge drink or do shots with friends. Spending so much time at home made her much more confident in switching to water after a glass of wine.

If I have to meet people for drinks for work four nights a week, and if I have a friend in town over the weekend — it all just snowballs.

Novelist and poet Leigh Stein, 36, had just started a 30-day alcohol-free experiment when the pandemic hit; she felt so good that she ultimately went 104 days without a drink. The period of sobriety even propelled her to write a collection of poems, What to Miss When, coming out in August. She’s drinking much less than she did pre-pandemic, where a glass of wine was a nightly ritual, but having the occasional drink with friends made her realize that drinking just wasn’t as fun as she remembered it. Like Debora, Stein, who lives in Connecticut, feels very aware of how much alcohol impacts her sleep and how tired she feels in the days after drinking. “All the downsides, I noticed them more.” Today a glass of wine is “a special occasion thing, and not a daily habit. It’s something I enjoy sharing with someone else.”

As people once again figure out how to party without feeling awful for the week after, Fingerhood recommends all the classic drinking tips you learned as a college freshman. “It’s always safer to be eating while drinking,” he says, noting that having food in your stomach slows the absorption of alcohol. He also advises being “careful” with mixed drinks, which typically have multiple shots in them per drink, and thus may contain way more alcohol than the occasional glass of boxed wine you had on your couch with your cat this past year.

Debora says to help her reacclimate to social drinking, she’s implemented a two-sober-days-per-week rule. “I know to many [people], that would sound like not enough, but I’m trying to be realistic if I have to meet people for drinks for work four nights a week, and if I have a friend in town over the weekend — it all just snowballs.” Given how much alcohol drives her social and professional life, she says she needs to be “thoughtful and strategic” about how to manage her drinking now that she’s back out.

As Stein has begun to see friends again, she chooses activities that don’t involve drinking. “You don’t have to go to a bar. You can go for a walk.” She adds that telling people why she won’t be joining them for a drink is easier now that she’s had the time to think through her not-quite-sobriety: explaining that she loved how she felt while not drinking — and so has decided to drink less — is easier than declaring, “I’m not drinking.”

“It can be awkward, but it’s not impossible,” she adds. “And it gets better with practice.”

Dr. Michael Fingerhood, MD, the director of the division of addiction medicine at Johns Hopkins University