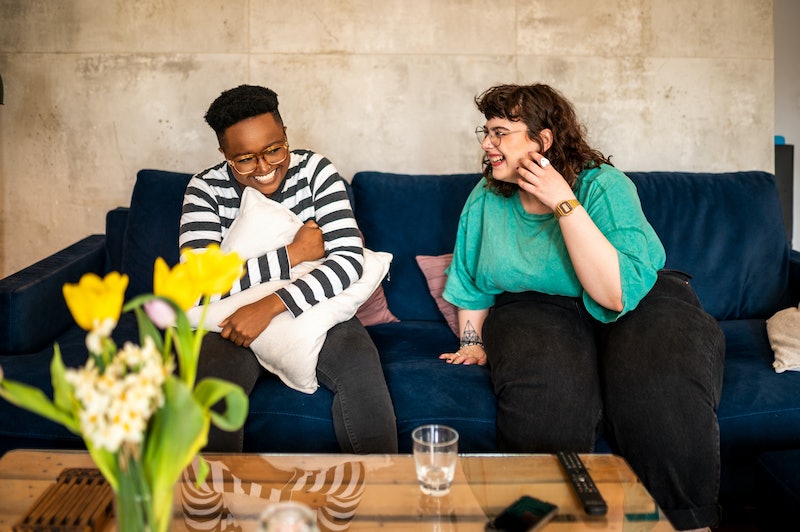 Moist. Mucus. Cyst. These are just a few examples of words people hate to hear. They make your skin crawl not only because of the gross visuals that come to mind, but also because of the way they sound. And that’s where the intersection of language and science comes into play, in the most interesting way.

“‘Gross sounding’ words are a phenomenon known as ‘word aversion’ or logomisia, if you want to get technical,” Mariana Ureña, MA, who holds a master of arts in linguistics, tells Bustle. “Linguists believe that there are three things that can influence people's aversion to words: connotation, sound, and social transmission.”

Let’s start with connotations. “We assign certain meanings or associations we deem as inappropriate, like bodily fluids, sexually charged words, or unpleasant memories, which is why hearing these words makes us uncomfortable,” Ureña says. And “the ick” factor isn’t unique to the English language. “For example, in Spanish, ‘húmedo’ (moist) [is one of the] most cringe-inducing words we have,” Ureña says.

Then we have the way a word sounds. “The aversion we experience to some words has [to do with the] visceral reactions to the sounds, for example, certain consonant clusters or some diphthongs,” Ureña says. A diphthong is a sound formed by the combination of two vowels, like the “oi” in moist.

Finally, there’s the old-fashioned social transmission factor. “We may just hate certain words because we are led to believe everyone else does,” Ureña says. It might be because your friends make a face when you say the word “moist” or a list of “gross” words is announced in the media. (You’re welcome!) Want to know more? Put down your lunch and take a look at the list of uncomfortable words below.

Let's start the list with the most obvious word: moist. Despite the fact it’s often used to describe delicious baked goods, people still positively despise it. The hate likely comes, in large part, from the aforementioned diphthong “oi,” which is all sorts of wet-sounding.

“Just like ‘oyster’ and ‘oil,’ these groups of vowels have an onomatopoeic origin,” Jelena Ciric, MA, a self-described linguistics buff who holds a master’s in language and literature, tells Bustle. “That is, they tend to express a sound that we associate with a certain type of object or experience.”

In this case, the word “moist” really does seem moist. “‘Oi’ sounds like a viscous fluid that doesn't easily ‘drop’ — there's another onomatopoeic word — but has this uninterrupted flow, just like the vowels ‘o’ and ‘i’ flow together in our speech,” Ciric says.

Also, if you imagine its less-savory connotations — think clammy hands or bumping into a sweaty stranger on the subway — it makes a lot of sense why people have deemed “moist” the grossest word of all time.

Ointment is also right up there, again due to the “oi” sound. It sounds gross but also has icky associations. “Nowadays, it's usually a benign substance,” Ciric says. “But we are not far away from the times when ointments were often made of disgusting elements that were meant to cure various and serious illnesses. Hence the ‘eww’ feeling we get from the word!”

Like moist, creamy can sound delicious or gross depending on the context. In Spanish, you’d say “cremoso,” which Ureña says is considered super disgusting due to the dirty image it brings to mind. “This adds to the theory that we associate some words with ‘nasty’ or even intimate and sexual things,” she says.

For all those same reasons, let’s add squid to the list. It has the aforementioned gross connotation, Ureña says, in that it’s a slimy sea creature. It’s also tough to say, which arguably adds to the displeasure of it all. Linguistically speaking, “‘squ’ is a consonant blend, in which the speaker has to pronounce each letter and it's a somewhat complex sound to make,” Ureña says.

Squirt ticks the same “gross” boxes but also adds the “rt” sound at the end. “That sound is one of the hardest English sounds to master,” Ureña says. “So it can be a matter of those sounds causing a negative feeling when producing them and listening to them, as they seem somewhat harsh and flat, which could make them appear ‘unnatural’ and halt speech by brief seconds, interrupting the flow of sounds and causing the aversion by bringing unconscious attention to the particular word that was pronounced differently.”

This word, plus the phonetics associated with it, brings to mind imagery of mud and sticky things. “With squelch, the effect evoked is rather the scenario and sound,” editor-in-chief of Homegrounds, Jovana Durovic, tells Bustle. Durovic agrees that certain words can bring back unpleasant memories from your past, particularly if it’s onomatopoetic like this one. “The sound of the word evokes these memories and triggers a flashback of sorts to the scene, and thus affects the feeling we feel,” she says.

Phlegm is a lot more obvious because of what it means. You get phlegm in your throat, you cough it up when you’re sick — and that’s undeniably nasty. It’s also similar to squirt in that it has the back-to-back consonants “gm” that are tough to say, according to Ureña, further adding to the effect.

“The word ‘smear’ is a ‘gross-sounding’ word because of the context it’s usually used in,” Gerald Lombardo, co-founder of the online tool The Word Counter, tells Bustle. “We use the word ‘smear’ to describe the usually unpleasant spreading of something that is also, usually, unpleasant.”

Gross associations? Weird mental imagery? Smear’s got it all, so much so that even the most benign usage can be cringe-y. “For example, I can say ‘I applied my face cream before bed’ or I can say ‘I smeared my face cream on before bed,’” Lombardo says. “The latter will give a much different impression than the former just due to the connotation of ‘smear.’”

While there’s nothing inherently wrong with slurping, it is considered impolite in American society, which Ciric says might make people automatically associate the word with “rudeness or messiness.” It’s also cringe-y due to its association with the literal sound of someone slurping, which has a tendency to trigger someone’s misophonia — or the disorder in which certain sounds cause emotional or physiological responses.

Lugubrious means sad or dismal, but it sounds like something that would bubble up from the bottom of a murky pond. With that slimy "goo" sound everyone hates, it’s no wonder it always tops lists of most-hated words.

While anything related to cheese is often considered a good thing, you can’t argue that “curd” sounds gross. Not only does it have a hard “r” sound that seems harsh, it also makes you think about smelly things. Even though many folks love eating cheese, curds aren’t afforded that same love, Ciric says.

Pulp is another non-fan favorite. “Even though the smell and taste of a fruit's pulp are very appealing to most people, there's another repelling aspect: touch,” Ciric says. “[The word is] heavily informed by sensory experience. Its texture is crawling down my elbows as I speak.”

There's also something about that "ulp" that sounds a bit like you're burping. It just doesn't feel — or sound — nice to say.

Mucus is definitely in the same linguistic vein as "phlegm" and "moist,” not to mention the sticky icky bodily function association. And really, that's the recipe for a gross-sounding word. Does it have grimy associations? Is it uncomfortable to say? Consider it on the list.

This article was originally published on Feb. 15, 2017