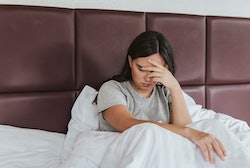 Being cheated on can feel like your heart got run over by a truck — and then the truck reversed and accelerated, again and again. Infidelity can often lead to questions about the relationship, making you wonder what else your partner may have been lying about or keeping from you. It can sometimes make you wonder what you did wrong — even when the answer is “nothing.”

The good news: Experts say people can absolutely have successful, honest, fulfilling relationships after being cheated on. There is no “right” way to get over being cheated on, but taking steps to heal before diving into a relationship — or continuing the one you’re in — is helpful. Here, five people share what worked for them.

I felt awful when I was cheated on. We broke up immediately, but as I began to unpack my feelings, I realized that the biggest dealbreaker wasn’t the sex, it was the lack of trust. And I began researching ethical nonmonogamy. This is an idea that you don’t need to have sex with only your partner, but you do need to be honest with them, have conversations about boundaries, and make sure everyone is on the same page.

Around this time, I also began getting involved in the kink scene. Seeing the way people were able to communicate honestly about sex and partnership was super helpful, and made me really mindful about how, for me, sex and commitment can exist on separate tracks. For me, seeking out partners with a similar mindset was really important. I had one partner for about a year. We were together because we wanted to be, and we could have sex with other people because it was fun, sexy, or something we felt a desire to do. We had boundaries for how close we got to other “play partners” — we made it clear communication was key regarding how we felt towards the people in our circle.

We broke up due to unrelated reasons, and I drifted away from the kink scene during COVID. Right now, the potential partners I’m meeting are more “vanilla.” I’m keeping an open mind and don’t necessarily know if I “need” ethical nonmonogamy in a relationship. But I do know if things become serious we will have a lot of intense conversations about what “being together” means — and it may not look like a traditional relationship. —Naisa, 33

It sounds so cliche, but I went to therapy after my partner cheated and we broke up. It was so helpful. I honestly don’t know if I would have sought therapy (if cheating hadn’t occurred) and when I first went, I did so because I thought something was wrong with me. Like, why had someone cheated on me? Over the course of therapy, I was able to identify so much about what I wanted from a relationship and a partner. I was able to realize I had ignored a lot of red flags because I just wanted to be with someone. It was hard and scary to really admit that the person I was with really wasn’t someone I wanted to be with.

I know cheating wasn’t my fault, but what I really learned is how much power I can hold and carry within a relationship. I went a lot slower with the next guy I was with and I had a lot more check-ins with myself: Is this what I want? By the time we moved in together, I felt much more solid than I did with my ex.

I know that you can’t “prevent” cheating. But I also know that if I do get cheated on again, I will be OK. —Shawn, 27

I’m now the person who shares passwords to my accounts with my girlfriend, and I expect her to do the same. I know that this might not work for some people, but for me, it’s reassuring that we can go into each other’s accounts at all times. I hated how my last girlfriend was so secretive with her phone, and I love that now, I can pick up my new girlfriend’s phone, log into her socials, and know exactly what to expect.

I also like that she can do the same for me. I know it’s not right for everyone, but sharing passwords works for us. —Amy, 33

I Went To A Swingers Resort

When I got cheated on, my friends encouraged me to come with them to a swingers resort in Mexico. It didn’t heal my heart, but it was a lot of fun to remember how sexy, hot, and attractive I was. I don’t know if I would recommend this to everyone, but I think a change of scenery and just doing something fun can be the best shift you can have. —Mark, 34

We Went To Therapy Together

I got cheated on when my boyfriend and I had a two-year-old. Breaking up wasn’t an option, financially or logistically. We were in lockdown, and my boyfriend had met someone on an app and they were hooking up at her house when I thought he was just taking a walk or hanging in his buddy’s backyard. It was awful.

Therapy was awful too. We cried a lot. And we were still living together, so we had nowhere to escape. But we were eventually able to find a reset. It wasn’t easy. We didn’t have sex for over a year and we were really just coexisting. But we did commit to therapy, and that helped us communicate, which led us to be able to reconcile. I don’t think cheating will happen again. Of course, I can’t be sure, but I feel both of us have grown so much by committing to at least trying to work things out. —Stef, 29

More like this
35 Sexy Texts To Send Your Partner
By Griffin Wynne and Carolyn Steber
I Want More Sex But My Partner Has ED. What Do I Do?
By Sophia Benoit
Passive Aggressive Examples To Look Out For In A Partner
By Jessica Estrada
8 Flirty Games To Play Over Text With Your Crush
By Lexi Inks
Get Even More From Bustle — Sign Up For The Newsletter