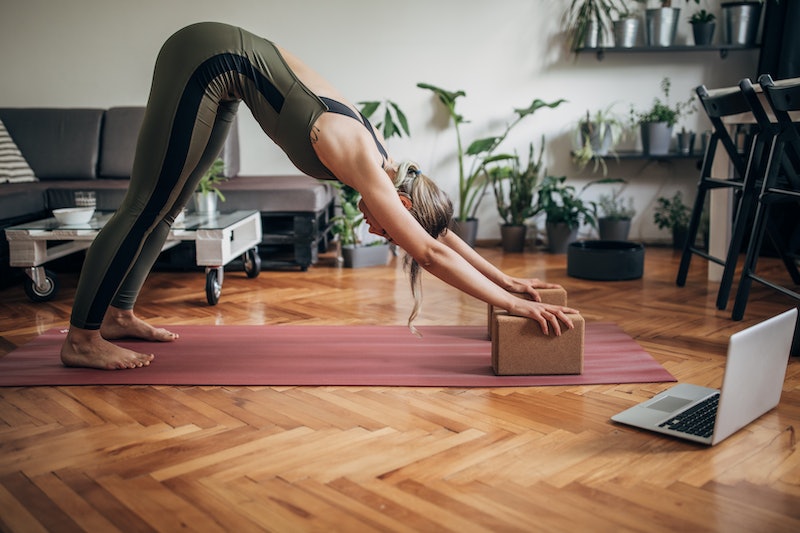 Not every yoga pose works the same way for everybody. Your child's pose might not look like your instructor's because that's just not the way your body is shaped, or you might not be able to settle into Warrior II because of that old knee injury. If your down dog doesn't seem to look like "everyone else's," you're probably not be doing it wrong — you might just need to modify the poses to fit your body. But since your online yoga instructor can't walk you through it in real time, it's hard to know how to modify yoga poses for yourself.

Though there is no one right way to practice, mainstream fitness culture often makes it seem like yoga is only for people with very particular types of bodies and abilities. But the reality is much more nuanced than that. "We were all born with unique body types and it is our job to honor that uniqueness on the yoga mat," says Ivorie Jenkins, a yoga and meditation instructor for yoga platform and livestream service Glo. "Modifications help you to honor and accept exactly where you are in your practice."

When Do You Need Yoga Modifications?

You might need to adjust your forward fold because your body just can't bring your chest close to your thighs. Or, it might hurt to sink into a low lunge. The one big clue that you need to modify a pose, though, usually has flashing red lights around it. "Pain is your body’s way of alerting you that something is wrong and is in need of your attention," Jenkins says.

Pay attention to your body to figure out when it's time to break out the alternative poses. "It is important to differentiate if the sensation you feel in your body is discomfort versus pain," says Zac Armstrong, a master instructor at the studio YogaSix. "Many poses are uncomfortable by design. If your sensation is pain, then you will need to modify it." Sharp or aching sensations often mean it's pain; if it feels the same as a light stretch but intensified, it's probably discomfort.

How Should You Modify Yoga Poses?

In general, Armstrong advises finding similar positions that have felt accessible to your body in the past. "Ask yourself, is there a version of this particular shape that you have already done in the practice that felt appropriate in your body? Then you can revisit that pose."

Even if you're taking a yoga class online (without an IRL instructor to guide you), you might not need a huge repertoire of yogic knowledge to find something that works for you. "Many times teachers sequence their classes mimicking the same shape but just with different orientations," Armstrong says, so you may be able to adjust your poses based on versions you've done earlier in the class.

If you're bringing a history of shoulder injuries to the mat, there are a bunch of poses you might need to adjust. Often, you'll want to limit your range of motion and avoid shifting your body weight through your shoulder joints. A good rule of thumb is to perform poses that would require you to do a lot of reaching with your shoulders with your hands on your hips instead.

"Poses to modify if you are nursing a shoulder injury are excessive vinyasas," Jenkins says. For example, you'll want to modify going from down dog to plank to chaturanga to upward facing dog and back again, since every one of these poses can be tough on your shoulders, Jenkins tells Bustle. "My recommendation would be to omit these poses altogether if there is any pain, and consider taking a restorative yoga class until your shoulder heals."

If your injury allows, Armstrong says you can drop to your knees to give yourself extra support while lowering into chaturanga. "Maintain a plank to lower no more than biceps to the rib cage with your knees on the mat," he advises. "Engage your glutes to help with weight distribution and proper alignment. You can also place a yoga block underneath your shoulders to give you a guide of when to stop lowering down."

You might also have a tough time with cobra pose, says Ashish Painuly, a yoga instructor and founder of the yoga resource database Fitsri. Instead of trying to push up into full cobra, try baby cobra instead. "From lying prone on your belly, lift your chest using core strength," he advises. "Slide your palms back next to the chest, roll your shoulders back towards both shoulder blades, and open your chest. Here, in baby cobra pose, hands and shoulders aren't used to lift the body off the floor unlike the cobra pose, hence no harm is done to your shoulder injury."

If your knees constantly act up, Painuly suggests keeping a blanket near your mat to help you out. "When in a yoga pose [in which] knees directly press the mat (like in a low lunge), placing a folded blanket under the kneecap reduces the compression on the patella bone," he suggests. "Similarly, in kneeling poses like hero's pose or child's pose, place a bolster underneath your sitting bones so that your knees do not have to bend as deeply."

When it comes to lunges, Jenkins recommends paying more attention to your body than to how your yoga instructor might look. "Don’t go too deep into your lunge," she says. "Play it safe. Instead of lunging to a full 90-degree angle, start at a 45-degree angle and concentrate on engaging the glutes and hamstrings so the knee joint doesn’t have to work so hard. A blanket under the back knee in a lunge can also feel supportive if the knees are tender."

Instability can also come into play in certain poses, Armstrong says. "If your injury causes you to feel unstable in crescent lunge, substitute chair pose to create a more stable base. If extreme knee flexion such as dancer's pose causes pain, lie on your side and bend your knee to your capacity to mimic the pose." In other words, experiment with ways to take the pressure off of your knees, even if that means recreating poses while lying down or sitting in a chair.

Yoga Poses When You Live With Chronic Pain

"My recommendation to those experiencing chronic pain is to practice yoga on the days when the pain is less and rest when there is more pain," Jenkins says. "Do all movements within a pain-free range of motion. Also, consider using the breath and meditation aspects of the practice to help with the perception of pain, stress, and overall well-being of the mind-body."

On the days that you do feel up to practicing, Armstrong recommends taking shorter classes that are flow-based. That way, you won't have to hold poses for too long. Dropping to your knees or coming out of poses early to drop into a more accessible pose for you (child's pose, for example) is always a good option when the moves are feeling intense.

"Modifications vary according to the shape of bodies," Painuly says. "Poses that require the body to fold can be modified using a bolster on the thighs (in case of seated forward bend) and then stretching forward with the tip of your head can gently stretch the spine."

Playing with your footwork can also be extremely helpful, Jenkins says. "If your weight makes it hard to forward fold, widen your stance until your belly is able to fit between your legs," she advises. Allow yourself to generously bend your knees along with your widened stance, and feel free to use blocks to bring the ground up to you if needed.

"I love the use of blocks to make forward folds and upward facing dogs more accessible," Armstrong says. "In forward folds, you can set the blocks on their highest height or stack them on top of each other to help elongate the spine and bring the ground closer to you. I also like to place the block underneath my hands in an upward facing dog to create more clearance from the ground."

How Can You Tell If Your Yoga Modification Is Safe And Effective?

"Yoga poses are our body’s language to communicate with itself, and your body knows it well how to communicate with you when something goes wrong," Painuly says. "To know if a pose modification you’re doing is safe or not, hold the pose for a while and try to observe the subtle sensations of your body. If you’re trying to push yourself intentionally and it makes you feel strained, it’s probably not suitable and safe pose modification for you."

To do it right, Jenkins says you need to focus less on doing it right. When you've modified a pose successfully, she says, "You are not thinking, 'Am I doing this right?' You are thinking, 'This feels really good.'" And feeling good is, after all, the point of yoga.