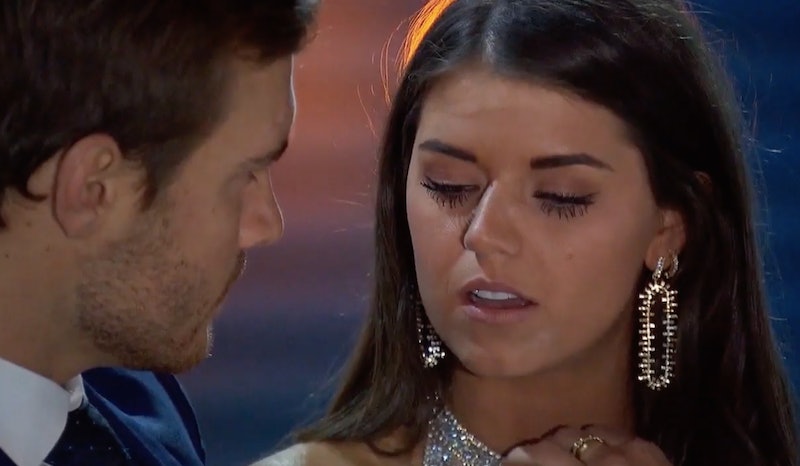 Watching one season of The Bachelor can feel like marathoning your entire romantic history on fast-forward. From immediately making out in hot tubs, to meeting the parents after only a few dates, to say Bachelor relationships move at warp speed would be the understatement of the past two decades. But the show's hasty pace also means that contestants can be hesitant to open up about vulnerable topics early on. And when Madison Prewett finally came clean to Peter Weber about her belief in abstinence and her commitment to her Christian faith, she may have had the realization that the two have completely incompatible views on sex.

In season 24, episode 9 of The Bachelor, Prewett explained to Weber (aka Pilot Pete) that she plans to abstain from sex until marriage, also sharing that the idea of Weber sleeping with other women makes her uncomfortable. However, when he was honest that he'd been intimate with the other women, Prewett left the room in dismay.

This isn't the first time the topic of abstinence, and the interconnection between sexuality and faith, has come up on The Bachelor. In 2013, Vachelor Sean Lowe was very open about his decision to save himself for marriage. And in 2019, Bachelorette Hannah B. sent Luke Parker home after he sex-shamed her and claimed she'd "slipped up" by being intimate with other contestants. With past conversations yielding such vastly divergent results, Bachelor fans are left to wonder if relationships tested by faith and sexuality can make it in the long-term.

"If a couple is deeply aligned on key values, beliefs, and goals, a relationship can surely survive if premarital abstinence is a value for only one of the partners," Dr. Carla Marie Manly, clinical psychologist and relationship expert, tells Bustle. According to Dr. Manly, sexual intimacy is only one part of a healthy relationship. Your connection can survive mismatched beliefs in abstinence, as long as you see eye-to-eye in other vital ways, such as a shared vision of the future or similar love languages.

Jaclyn Lopez Witmer, a licensed clinical psychologist at Therapy Group of NYC, tells Bustle that it's also important to find other ways to build intimacy with your partner without having penetrative sex. And yes, if you believe in outercourse, that can include other kinds of sex. "Sex can mean a wide range of activities; it's not just [typical] sexual intercourse," she says. "So, if the couple is open about sexual desires, preferences, and what sex means to them, they'll likely be more fulfilled sexually."

It's always OK to open up to your partner only if and when you're ready. However, keeping your belief system to yourself has the potential to create distance between you and your partner long-term, which could ultimately drive you apart. "If the partner who is not choosing abstinence is angry or resentful of this choice, the issue can become a wedge between the couple," Manly says.

When you kick off the conversation, don't give your partner an ultimatum: Start by explaining the root of your faith, and illustrating why your values are vital to you. Remember: Your partner doesn't have to share your beliefs, but they do have to respect you and your faith. "If pressured to engage in sex prior to marriage, [the abstinent] partner may feel devalued and even devastated by breaking their own promise to remain abstinent," Manly says. "The abstinence is often highly symbolic of certain core values, beliefs, and personal promises."

And if your partner doesn't treat you with the due regard you deserve, it's always OK to get up and walk away — just like Prewett.