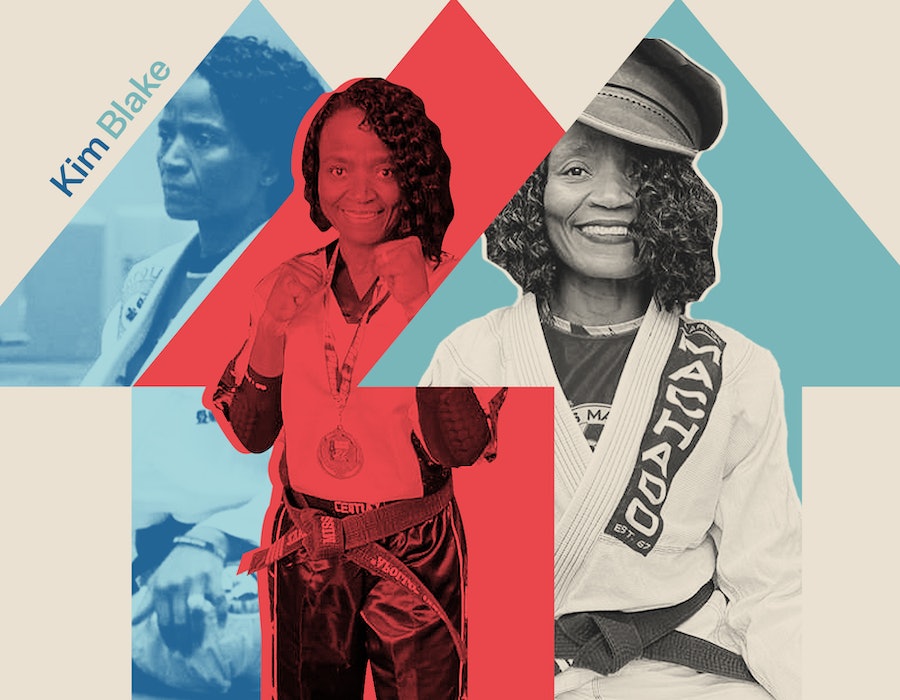 Kim Blake
The Level Up

In “The Level Up,” changemakers in the fitness and wellness industries tell us how they’re making an impact in their communities, from pushing for inclusivity to promoting body acceptance and so much more. Here, two-time jiu jitsu world champion Kim Blake talks about how she’s shattering stereotypes in martial arts.

Kim Blake has always loved martial arts. When she was a young girl growing up in Cleveland, Ohio, she wanted to emulate the athleticism she saw on the big screen in Bruce Lee movies. And when the opportunity rang in the form of an after-school martial arts class, Blake jumped at the chance to give it a try. “But my dad said, ‘Girls don’t do that,’ so I didn't pursue it,” the now 60-year-old tells Bustle.

All that changed when she was 41. “A friend of mine asked if there was something that I regretted that I didn’t have a chance to do at a young age,” says Blake, who was working as a pipeline scheduler for BP Pipelines at the time. After recounting her longtime love of martial arts, her friend asked, “What’s stopping you now?”

Thus began Blake’s groundbreaking career in the field. After taking her first karate class at age 42, Blake quickly made a name for herself in a number of martial arts disciplines, including Brazilian jiu jitsu (BJJ). In 2017, she suffered a debilitating neck injury in competition, only to bounce back a year later to snag the BJJ World Master Champion title, become the first woman in the state of Oklahoma to earn her black belt in BJJ, and be named Impact Woman of the Year at Tulsa’s Women of Color Expo. In 2019, she earned her second BJJ World Master Champion title. Beyond that, she’s won more than 30 grand championship titles in sport karate and is a USA Martial Arts Hall of Fame inductee.

Today, Blake is gearing up to compete for her third Master World Champion title in partnership with StretchLab, an assisted stretch studio. Here, she tells Bustle about what it’s like to rise to the top of a male-dominated sport and how she’s paving the way for other women in martial arts.

When you first started training in martial arts, what was representation in the sport like?

It’s been a man’s world for so long. When I started out, it was with a bunch of guys who wanted to get into a ring and fight. And I would always have to ask questions to better understand what I was learning, but it was intimidating because I was the only girl.

The first time I competed in jiu jitsu, which was in 2010, they would have only one ring designated for women. And the women’s competition would be done so fast because there were so few competitors.

But the more women who do it, the more other women want to do it. Now, you have a lot more women competing. The older you get and the higher your rank in both jiu jitsu and karate, it dwindles, but still, you see women in their 60s and 70s competing, and it’s a beautiful thing.

What’s your advice for people who are intimidated to try something new due to their age, whether that’s martial arts or a different activity?

Just do it — even if you just show up and watch at first. Each time you’ll get a little closer to the mat, and the more that you show up, the easier it is to suddenly try it.

My second piece of advice is to just do you. My skills are good, but if you compare me to a 20-year-old with the same credentials, they’re most likely going to be faster. But we can both do the damage in our own way. The point is, the only person you should compare yourself to is the version of you who left the mat the day before. Commit to doing just a little bit better every day.

What change do you hope to effect in the martial arts world?

I want to empower women, especially women my age. The way that I’m going to do this is with my son. He’s opening up a gym later this year, where I will teach jiu jitsu and empower women through self-defense. I’d like to be there as a beacon to tell them they can do this, and even just to make sure that they can always get home safely to their loved ones.

What’s your advice for women who are interested in martial arts but haven’t taken the leap?

What do you hope the jiu jitsu world looks like 10 years from now?

Right now, if you look at a lineage, it’s always a line of all men. [Editor’s note: Jiu jitsu lineages refer to who trained you and how they’re connected to the founders of BJJ, similar to a family tree.] But it would be totally awesome to have women in the lineages of jiu jitsu schools.