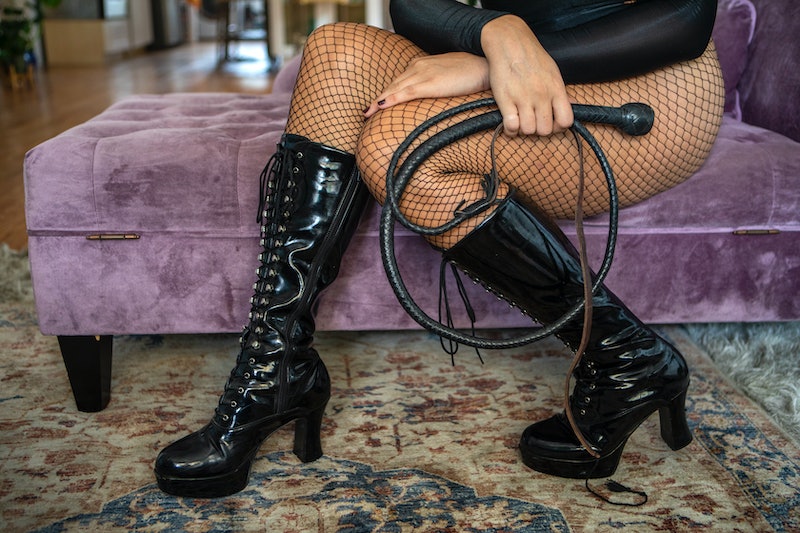 Everyone has different preferences in the bedroom, and many people tend to see those preferences on a spectrum from “vanilla” (more traditional turn-ons) to “kinky” (wilder or less common turn-ons). While kinky sex is now more normalized and celebrated, there are still some common misunderstandings about the differences between kinks and fetishes.

Although some people might feel like separating the terms is a matter of semantics, there are differences between a kink and a fetish that are important to understand in order to explore them in a mutually consensual and pleasurable way. According to sex therapist Dr. Gloria Brame, while “kink” can be seen as an umbrella term for many different kinds of sexual preferences that break through heteronormativity, a fetish also has some characteristics all its own.

Learning about your own kinks and/or fetishes can help bring about even more pleasure with a partner and allow you to further understand your own sexuality. While some typical turn-ons — like spanking, choking, hair-pulling, etc. — can be seen as kinky, there are also some unique and less common kinks and fetishes available to you. Exploring these either solo or with a partner can be an exciting way to become more sexually confident. Intrigued? Read on for more intel on kinks versus fetishes and how to explore each on your own.

What Is A Kink?

What can be considered a kink also varies greatly from person to person, according to Marla Renee Stewart, sexologist and founder of Velvet Lips Sex Ed. “One person may think that spanking is kinky and another person might not think it is kinky,” she says. “It’s purely subjective.”

What Is A Fetish?

Brame also says that naming one certain fetish doesn’t describe precisely what turns someone on about that object or body part, or how they choose to incorporate it during sex. For example: “One fetishist only likes female feet, another only likes male feet, and some fetishists just like feet, regardless of gender,” she explains. “Similarly, there are big distinctions in footwear — some fetishists love bare feet, and some are drawn to specific footwear like boots, high heels, or sneakers.” In other words, there’s a huge diversity within every basic fetish category.

One important distinction to remember: A fetishist views their fetish as necessary in order to feel pleasure. “People typically need fetishes for sexual excitement and/or orgasm,” Stewart says.

Like Dr. Brame mentioned, the term “fetish” does fall on the kink spectrum, but can definitely be distinguished from what you might normally consider being a kink. “A fetishist has very specific turn-ons related to parts of the body (feet, hair, hands, anything that is not considered an erogenous zone by most) or objects, which can range from rubberwear and specific kinky toys (e.g., a cane, a leather strap) to inanimate objects, such as cars or furniture. Their interest may or may not include power dynamics and may be purely sensual, without any rough play,” Dr. Brame says.

How To Know If You Have A Kink Or Fetish

How To Talk To A Partner About Your Kinks Or Fetishes

As with any sexual fantasy or desire, voicing your wants and needs should happen outside of the bedroom just as much as it happens inside. If you find that you have a kink or fetish, Brame recommends communicating about it with your partner early on. “It might not be something you discuss on a first date, but I think it's crucial to let the person know of your sexual interests and orientation before either of you make commitments or start planning a future,” she says.

Expressing your kink or fetish wants with your S.O. helps them better understand your sexual preferences, ensuring you get what you want in the bedroom long-term. What’s more, Brame says it can also help keep your relationship healthy and free of resentment. “[Talking about your kinks/fetishes] helps to avoid the sense of betrayal some straight people feel when they find out after they're in love or married that their partner won't be fully satisfied unless there is room for their kink or fetish in the relationship,” she says. “It also helps the kinky or fetishistic person avoid the bitterness of being rejected for their innate erotic needs.”

If you’re nervous about approaching your partner with these conversations, Stewart recommends framing it in a purely positive way. “If you suspect they might not be into it, you can use the power of positive reinforcement,” she says. “For instance, you can say something like, ‘I love how strong your hands are. What do you think about putting them to use by giving me a spanking? After all, I have been a little naughty lately.’ Most people love compliments and to please their partners, so this is usually a win-win situation.” Open the door by giving them the room to ease into it without any pressure.

Finding a partner who will vibe with your kinks or fetishes is also something you’ll need to tackle (if you’re not already in a relationship). For a good place to start, kink-positive websites like FetLife (warning: NSFW) or inclusive dating apps like Feeld may be of assistance in this endeavor. While you’re learning and exploring, Brame says you shouldn’t settle when it comes to an accepting and open-minded partner. “People who react negatively or judgmentally are not going to be a good bet for a satisfying future sex life,” she says. And that’s the tea.

More like this
How To Have A Hometown Hookup Without Catching Feelings
By Lexi Inks
How To Deal With A Partner Who Body Shames You
By Lexi Inks
Are Sagittarius & Aquarius Compatible In A Relationship? Astrologers Weigh In
By Kristine Fellizar
Do I Have To Tell My Crush That I Slept With Her Ex?
By Sophia Benoit
Get Even More From Bustle — Sign Up For The Newsletter