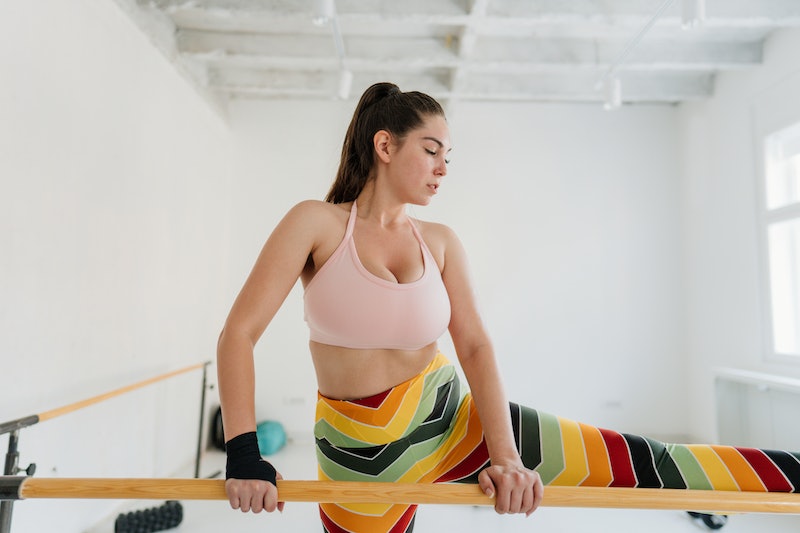 If you watch someone do a Pilates workout next to someone moving through barre exercises, it can, at times, be hard to differentiate between the two. While both fitness modalities are low-impact, challenging, and work to lengthen and strengthen your muscles, looking at the nuances between Pilates vs. barre will prove they’re far from identical.

For a quick rundown of each: “Pilates is a set of exercises that incorporate specific principles and techniques that are performed either lying down on a mat or on specialized Pilates equipment, most commonly on the Reformer,” Jennifer McCamish, the founder of Pilates, barre, and athletic conditioning studio Shape Method, tells Bustle. “Most times you will begin your Pilates sessions lying down and progressively move the entire body in all planes — flexion, extension, rotation, and lateral flexion.”

And then there’s barre. While it might bring to mind visions of pink leotards and scrunchy ankle socks (which you can totally wear, BTW) the main goal of the fitness modality is to take elements from ballet, yoga, and Pilates and mesh it all into a dynamic workout — no dance background required. According to Katelyn DiGiorgio, a teacher and VP of training and technique at Pure Barre, barre is low-impact, high-intensity, and designed to increase full-body strength.

Read on for a full rundown on the similarities and differences between Pilates vs. barre, below.

The Benefits Of Pilates

If you’re looking for better overall mobility, Pilates is always going to be a good choice. “Most Pilates exercises feature both a stretch and a strength component, as well as a deep emphasis on the core,” Ashley Patten, a celebrity Pilates instructor, tells Bustle. “It’s a very balanced workout that stretches all parts of the body — the front, the sides, and the back.” And that’s why Pilates is renowned for lengthening your body: Its exercises tone as they elongate every muscle group, which results in more fluid movement in everything you do.

It also makes you stronger by training the deeper “stabilizing muscles” so that they work in conjunction with larger muscle groups, McCamish says. In other words, “Pilates stretches tight areas and strengthens weak areas to create a balanced, more efficient body.” When your body is balanced in this way, everyday movement feels easier: You’ll experience fewer daily aches and pains, and will be less susceptible to injury. And that makes Pilates a form of functional exercise.

You can take either equipment-based Pilates classes or mat-based workouts, the latter of which mimic the moves you’d do on contraptions like the Reformer and Cadillac. In both classes, you may use tools like resistance bands or a Pilates ring (also known as a magic circle).

While Pilates isn’t a cardio workout, you can certainly incorporate more heart-pounding moves into it, depending on the type of class you take. If your Reformer has a jumpboard, for instance, you can perform plyometric-type moves while lying down to increase your heart rate.

Typically, though, you’ll glide through a series of sculpting moves that depend on your core strength, like 100s, leg lifts, planks, roll-ups, and bird dogs. According to certified Pilates and NASM instructor Paula Present, the workout won’t involve sweating through a ton of reps — instead, expect fewer, more controlled reps that allow you to connect to your body and engage in proper form.

The Benefits Of Barre

Barre incorporates a unique series of moves like ballet squats, leg lifts, lunges, curtseys, arabesques, and pliés, all of which bring on the burn. “The goal is to focus on small, intense movements that push muscles to the point of fatigue,” DiGiorgio says. (Think pliéing till you can plié no more.)

Since barre incorporates a lot of ballet moves, it’s also great for enhancing flexibility and mobility, which can help you feel good overall. “Improved flexibility, and having a full range-of-motion of your body, ensures that your joints are moving freely, which can lead to improved posture and can reduce the chance of exercise-related injury,” DiGiorgio adds.

Wondering what you’ll tone? Barre is all about the butt muscles, as well as the hamstrings, calves, and core. But it can also be a full-body workout. “You can easily firm up your arms too,” DiGiorgio says. “A sculpted barre workout uses small but defined isometric movements to tone your biceps, triceps, and shoulders.” One example would be using either a light dumbell or simply your body weight to do tiny arm circles to fatigue and strengthen your arms and shoulders.

A barre studio usually entails a giant mirrored room circled with ballet barres. But, like Pilates, you can easily do barre at home, too. “In some barre classes you'll use just the barre, or an equivalent at home, like a countertop or chair back, plus your body weight to churn out rep after rep of muscle-burning moves,” DiGiorgio tells Bustle.

Other classes incorporate tools like resistance bands, sliders, ankle weights, free weights, and exercise balls, she says. And again, you’ll do those ballet moves, as well as ones taken from yoga and Pilates, like lunges and side bends.

According to McCamish, the main similarities lie in the fact both use body weight and/or light hand weights, as well as handy little props, to help you strengthen your entire body. Patten says there are also plenty of crossover moves, like lunges and planks, that you’ll often see in both classes.

Both are also considered low-impact workouts. Pilates was originally designed as physical therapy, making it perfect for those who want to take it easy on the joints. Barre is low-impact because it doesn’t contain any bouncing or jumping. Instead, it’s all about engaging muscles while remaining stationary, DiGiorgio says.

Then there’s the isometric movement factor, which both modalities have in spades. “Isometric movements are exercises in which the muscle fibers are fixed in length throughout the contraction,” DiGiorgio says. “Think of doing a bicep curl and holding the elbow bent, but the muscles are actively contracted.” Rather than actively moving your arm up and down in a curl, you’re exerting tension on the muscle by holding it in a certain position. The point is to help muscular endurance and stability. An example of an isometric movement in barre would be pulsing in a squat (you’re engaging your glutes and quads as you hold), while an example in Pilates would be a plank (this activates your core muscles).

These two forms of exercise differ most in terms of muscle recruitment. “Barre usually isolates body parts and does a lot of small, repetitive movement on each,” says Present. “It’s the opposite in Pilates, where every exercise involves the whole body.”

When it comes to picking one for your workout, it really comes down to what makes you feel more comfortable, what your fitness goals are, and, of course, personal preference. “You have to find what works best for your body,” says Present. “And, most importantly, what you enjoy.”

Katelyn DiGiorgio, teacher and VP of training and technique at Pure Barre