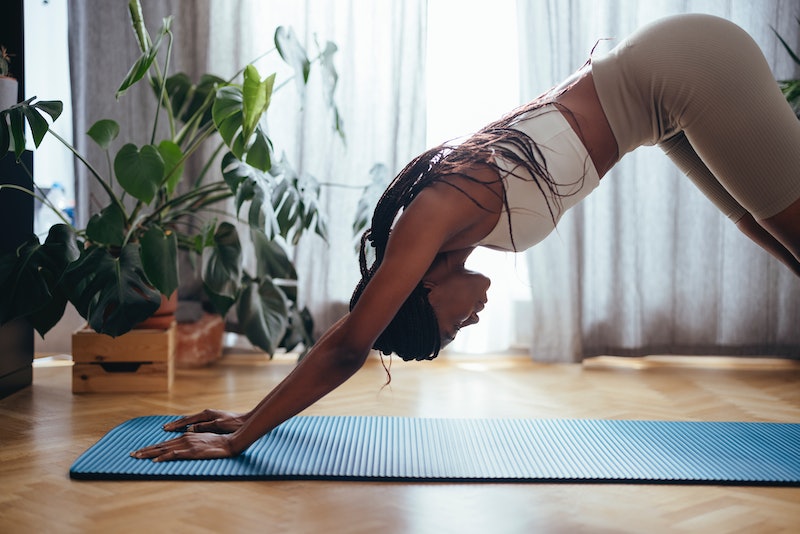 Both use a mat. Both focus on stretching. Both involve deep breathing. So really, how do you decide between yoga vs. Pilates? At first glance, the two practices can seem almost identical, but instructors say they are decidedly different, and that each has its own, unique set of benefits.

The biggest difference, of course, lies in each fitness modality’s history. Yoga began in India 5,000 years ago as a personal development practice, says certified yoga instructor Nira Shah, LMHC, whereas Pilates was created in the 1920s by Joseph Pilates as a form of physical therapy that addressed aches and injuries. There’s also a spiritual element that sets yoga apart. “Yoga has strong philosophical roots, which are reflected in ancient texts but not always in yoga sessions themselves,” says Shah. The practice is known for promoting a holistic lifestyle on and off the mat, and Pilates is more centered around mobilizing the body.

Despite its spiritual foundation, modifications have been added to many Westernized yoga classes to address exercise and fitness goals (think yoga sculpt and hot yoga, for instance). And that’s where the line between yoga and Pilates starts to blur. “Both Pilates and yoga have many variations and can resemble one another,” Shah says. “Both integrate controlled breathing and can include more cardio-focus.” Read on for the full differences between yoga vs. Pilates that’ll help you decide how to get your sweat on.

At its core, Shah says yoga is meant to align the mind, body, and spirit using physical postures and controlled, conscious breathing. Typically, a yoga class will begin with centering yourself on a mat before moving through a series of postures, or asanas. The goal is to match your breath to your movement. Staple poses include downward dog and child’s pose, which you’ll bend and twist your way through before ending with a meditation in savasana. (That’s when you get to lie on your back and listen to soothing music.)

A Pilates class will also focus on specific movements and controlled breath, usually with the goal of strengthening and aligning the body and improving flexibility, says Pilates instructor Eloise Skinner. While both Pilates and yoga encourage you to zero in on how your body feels so that you remain present in the moment, Pilates has more of a focus on the spine and pelvic alignment as well as major muscle groups like your glutes and core, says Skinner. And it sometimes incorporates equipment that you won’t find in a yoga session. “Classes tend to incorporate mat-based exercises as well as stretches, but it's also possible to use equipment in Pilates, such as a reformer bed or other props,” she tells Bustle.

Another difference, according to Vanessa Johnson, NCPT, a master trainer for Club Pilates, is that a Pilates workout keeps you in constant motion, while some variations of yoga have you hold a pose for a while. “There is a strong focus on building strength and stability in the core and the spine in Pilates, so you’ll perform a lot of exercises with that in mind, whether you’re doing it on the reformer or mat,” she explains. Some go-to Pilates moves include swimmers, mermaids, bridges, twists, and side bends, which can look a lot like yoga poses.

The Benefits Of Yoga

When you go to a yoga class or follow along with a yoga video, you can expect to feel a little less stressed by the end. “Mentally, yoga can induce a state of calm and mindfulness by the continual return to the breath and its sensations,” Shah says. “[It can even] help reduce symptoms of depression, anxiety, and stress, especially if you stick to an ongoing practice.”

While it can be slow and gentle, yoga is always going to be a good workout. “The physical practice of yoga can provide stretching, build muscle, and increase flexibility,” says Shah. “From a fitness perspective, yoga can be either high impact or low impact, depending on the style and pacing of the class.”

What you get out of yoga really depends on your goals as well as what type of yoga you try, says Kelly Clifton Turner, a yoga instructor and director of education for YogaSix. “If you're looking to gain strength and flexibility, try a heated vinyasa or power yoga studio, or another style like Ashtanga,” she tells Bustle. “If you're looking to stretch, relax, or have an active recovery day, explore restorative yoga, yin, or even a slow flow type class.” Then there are yoga sculpt classes, which add resistance training and sometimes even weightlifting into your flow.

The Benefits Of Pilates

Pilates isn’t necessarily a spiritual practice, but it definitely has some mental health benefits. “On a mental level, the emphasis on the mind-body connection creates a better sense of awareness and control,” Skinner says. Physically, you can also expect to see some serious gains in your abs and other muscle groups. “Pilates movements target specific muscle groups and are repeated while your breathing is controlled to help maintain endurance during the repetitions,” Shah adds.

After a couple of classes, you can expect to feel stronger, more aligned, and more flexible. Remember, Pilates was designed with physical therapy in mind — so it’s meant to help your body move in the most efficient way possible, says Johnson. It’s also a great way for anyone with an injury or joint issue to exercise without putting added stress on their body.

The overall consensus? Both yoga and Pilates offer a gentle way to exercise your muscles, focus on your breath, and increase your strength — with nothing more than a mat.