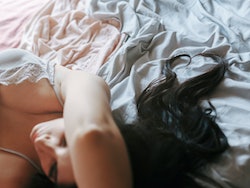 "The concept of ethical as it relates to adult content production is complex," Lust tells Bustle. "It’s important to say there is not yet a consensus about what exactly it is, but in simple terms, ethical porn cares about the performer's welfare. It is adult cinema where consent has been given for every part of the film from all parties involved. This means consent regarding the sexual acts being performed, but also the rate of pay they are receiving. Personal limits and boundaries are respected and the performer can stop shooting at any moment if they feel uncomfortable. Everything is done under a safe sex environment, good working and safety conditions, and labor rights for performers and crew. This environment emphasizes safety and mutual respect."

More like this
My Partner Wants Me To Wear A Diaper During Sex. Help!
By Sophia Benoit
TikTok's Voluntary Celibacy Trend Has Sparked A Movement
By Lexi Inks
5 Signs You Have A Toxic Relationship With Yourself
By Lexi Inks
18 Hinge Prompt Answers To Try If You’re Looking For Something Casual
By Lexi Inks
Get Even More From Bustle — Sign Up For The Newsletter
From hair trends to relationship advice, our daily newsletter has everything you need to sound like a person who’s on TikTok, even if you aren’t.

This article was originally published on May 18, 2018