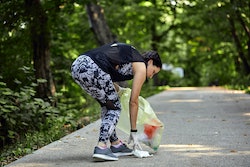 While jogging has its merits, it admittedly can get a little bit stale after the first couple of blocks. That’s why lots of people are all about the plogging trend, a viral TikTok workout that combines jogging with an unexpectedly engaging activity: picking up litter.

Plogging has been blowing up on TikTok, where it has nearly 7 million views under the #plogging hashtag. The term actually hails from Sweden, where it’s called “plogga.” The term is a play on the Swedish words “plocka upp” or “pick up.” In English, “plogga” gets combined with “jogging.” And there you have it — plogging.

To try it, simply grab a trash bag and head out for a run. Keep your eyes peeled for litter, like pieces of plastic, takeout containers, or glass bottles, pick them as you go, and then toss or recycle everything once you get back home. It’s something you can do in a park, on your street, as you run around town — basically anywhere and everywhere litter can be found.

According to Vanessa Liu, a certified fitness trainer and nutritionist, who has tried plogging herself, this trend is popular because it puts a positive spin on how we usually approach exercise. “In the past, people used to think that it had to be miserable, as in you had to sweat and suffer in order for a workout to count,” she tells Bustle. “Nowadays, people are realizing that fitness should be fun, enjoyable, and purposeful.” With that in mind, here are the many benefits of plogging.

The Benefits Of Plogging

Not only does plogging help the environment, it also transforms a typical jog into something that feels brand new. The hunt for litter adds motivation and keeps you going for longer. “And it’s even more motivating when you do it with a group of people because you get a shared sense of purpose and a social element to it,” Liu says. Turn plogging into an adventure or competition to see who can find the most trash, and you won’t even realize you’re exercising.

That said, plogging is also a fantastic workout. “You’re not only jogging, but you’re incorporating a lot of functional muscle activity,” Liu explains. “As you pick up litter, you have to squat, lift, carry, pull, rotate, bend, and balance. That’s a ton of lower body motion and core work involved. By using the hips as a hinge, or lunging down to the ground to pick up litter, you’re working your glutes, hips, hamstrings, and quads.”

An engaged core will help keep you balanced and stable as you reach for that fast food wrapper someone carelessly tossed out their car window. “You also have to carry and hold your trash bags, which mimics an isometric bicep curl and dumbbell carry, so you get some great upper body work, too,” Liu says. While jogging is typically a lower body and cardio exercise, plogging effectively turns it into a full-body workout.

There are a few things to be aware of when it comes to plogging, Liu says. If you have low back or knee pain, you’ll want to be cautious since it requires a lot of kneeling and stooping, stopping and starting. “Those sudden, jerky movements can aggravate existing back or knee pain,” she says. “If that’s you, I recommend walking instead of jogging, or being very mindful about slowing your jog down before you stop to pick up trash.”

It’s also smart to switch up which arm you use to carry the trash bag, especially as it starts to get heavy. Liu says this will help distribute the weight evenly so that you don’t overuse one side of your body, which can lead to injury.

Be mindful of your back, too, especially if you try to pick up bigger items. “You’ll be stronger, more stable, and more safe if you pick up a heavy piece of litter by doing a dead lift motion, or if you come down onto one knee by lunging,” Liu says. “You want to avoid bending from your back too often.” From there, remember to watch out for traffic, avoid touching anything too questionable, and you should be set to enjoy a good plog.