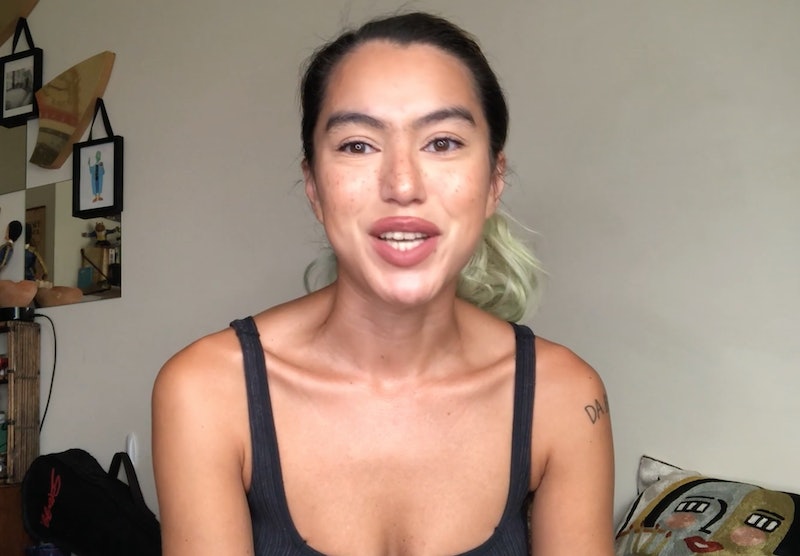 Amid a pandemic, OnlyFans quickly became the standout platform for people — both regular folk and celebrities — to make extra money from home this year. It's a subscription-based digital service where content creators charge their subscribers, or "fans," to access their photos and videos — making it a great way to be your own boss, so to speak.

OnlyFans doesn't have strict rules, either, as far as content goes. You can share a video of yourself making spaghetti, or you can share nudes. Because many other popular social platforms wouldn't be cool with that latter option, OnlyFans has also become a place for many sex workers to make a living by sharing videos, web-camming, etc., since they can't meet up with people in person.

Even though the platform has been around since 2016, it's only now that we're thinking about all the implications of having an OnlyFans account. And it's what the latest episode of Bustle Docs, which premiered on Nov. 24 on YouTube and Facebook, explores. It follows four people with OnlyFans accounts as they openly and honestly weigh the pros and cons of being on the platform. Here's what they had to say.

OnlyFans is a way for many people to make money quickly and easily from home — a godsend during COVID-19. It's what drew Paige, a flight attendant from New York City, to the site back in March. She tells Bustle Docs creating an account was a way to take back control of her finances after her hours at work were reduced.

Her content focuses on photos of her legs and feet in pantyhose, which she also sells to her subscribers. The highest offer she's received? A whopping $500 for a pair of worn, torn nylons. On average, Paige says her photos alone bring in $100 per week. And when added together, it makes for a lucrative side hustle.

Even though her content is sexual, Paige doesn't try to hide her OnlyFans, and says it isn't likely to have a negative effect on her career. In fact, she knows several other flight attendants who also sell photos of their feet.

Marcus, a full-time hotel operations supervisor in New York City, is equally unbothered by his OnlyFans account. He tells Bustle he signed up after a three-week furlough thinking he'd share hair tutorials, but quickly shifted to sexy photos and modeling content, since it generated more income.

His OnlyFans page contains a lot of nudity, but Marcus says it wouldn't hurt his career if his coworkers or general manager found it, mostly because it would mean they paid to see it. He says one of his coworkers is even a subscriber, which just might mean this type of work is slowly becoming normalized — and isn't necessarily guaranteed to get you fired from your day job.

Of course, OnlyFans isn't just for sex work. It's also open to creators who want to share other types of content, like Lexington, a full-time corporate social responsibility manager. She started her account earlier this year after moving to Los Angeles, and mainly posts videos of herself singing, dancing, and working out, with the goal of motivating her subscribers.

Lexington tells Bustle Docs she first signed up as a joke, but quickly began taking it more seriously once she began pulling in $1,500 a month. Now, she proudly displays her OnlyFans link in her social media bios, saying she's all about authenticity, sharing her life, and, of course, making extra money. For those looking for additional income, she asks, why not give it a try?

But not everyone has had a positive experience on the platform. Aaliyah, a model, actor, and activist based in Los Angeles, tells Bustle Docs they created an account earlier this year after hearing about it from people who were web-camming. As someone who's done sex work on the street, Aaliyah thought the platform sounded like a great way to continue making money — in a safer way.

And yet, after giving it a try, they heard about fellow creators receiving death threats, and others having their content stolen and shared by "fans" who just wanted to call them out. So they deleted their account.

Aaliyah's not the only one who's been vocal about issues on the platform. Recently, sex workers — who rely on OnlyFans for income — have criticized celebrities for taking attention away. Former Disney star Bella Thorne created an account in August, promising nude pay-per-view content, and made a cool $2 million in seven days.

A week later, OnlyFans announced that, going forward, there would be a cap on how much performers can charge for pay-per-view content ($50), how much fans can tip ($100), and they changed how often performers get paid from once a week to once every three weeks.

While OnlyFans said the update had nothing to do with Thorne, it's sparked conversations about the challenges sex workers are facing.

More like this
Breeding Kinks Have Been On The Rise Since Roe V. Wade Got Overturned
By Lexi Inks
Are Quality Time & Gift-Receiving Love Languages Compatible?
By Lexi Inks
21 Signs You're Not In Love Anymore
By Sara Altschule, Kathleen Ferraro and Carolyn Steber
The 19 Best Tweets & Memes About Bisexual Awareness Week
By Lexi Inks
Get Even More From Bustle — Sign Up For The Newsletter