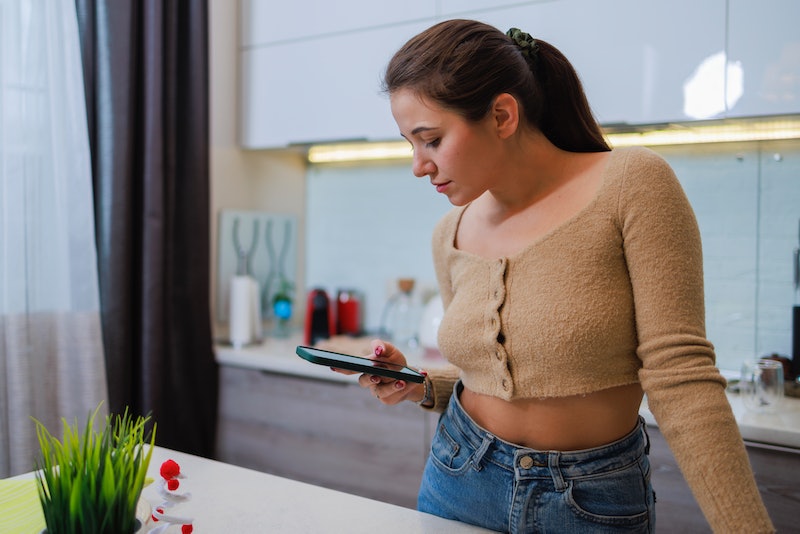 Tinder and Bumble are two of the biggest dating apps out there, and they’re pretty similar in the way they work. You scroll through profiles and swipe right or left, depending on whether you like what you see. Despite their similarities, Tinder and Bumble have key differences that really set them apart. If you’re wondering which app is best for you, dating experts share the pros and cons of each.

Especially right now, as in-person socializing is still somewhat limited, “Tinder and Bumble can both be great options for dating,” Dr. Dalesa Martinez, licensed marriage and family therapist, tells Bustle. “Being able to talk to someone online before deciding if you want to give them your personal information makes the dating scene feel easier. There are, of course, pros and cons to each one, but it all depends on what you are looking for.”

Licensed clinical psychologist, Dr. Holly Schiff, Psy.D., agrees. When comparing the two, it’s important to think about what kind of experience you’re looking for. Although both are dating apps designed to connect you with new people, Tinder gained a reputation early on for being a “hookup app” even though surveys conducted by the company say otherwise. For someone who hasn’t been online dating for a while or is completely new to it, that distinction may cause some hesitation. According to Schiff, “People have come to have a lower expectation of the quality of matches on Tinder, so they may not expect the same level of courtship that they might on an app like Bumble.”

If you’re debating between Tinder and Bumble, here are some things you should know about each dating app.

Should I Use Tinder?

Tinder was first launched on college campuses in 2012, and continues to be one of the most popular dating apps worldwide. It’s available in 190 countries and has been downloaded over 430 million times. Its user base also skews younger; according to Tinder, over 50% of their current members are between the ages of 18 and 25, so it’s a good option for Gen Z folks.

On the plus side, Tinder is user-friendly. You don’t have to answer a long list of questions to start getting matches — you can easily create a profile by adding some photos and writing a good bio. Then you can start swiping. They have premium features available as well, including the Super Like, which can make you stand out among the hundreds of other matches someone may have. There’s also a Tinder Boost feature where you can get up to 10 times more profile views, which can be purchased if you’re a regular user. There are even paid subscription tiers that offer more Super Likes a week, one free Tinder Boost a month, and the opportunity to message people before matching. If you’re traveling, Tinder also has a Tinder Passport feature that allows you to connect with people in other cities before you get there.

With Tinder, there’s no restriction on who gets to make the first move once a match is made. You can start messaging right away, which good be a pro or a con, depending how you look at it. If you’re shy or don’t like to break the ice, this could be a good thing for you. At the same time, “This may lead to someone repeatedly messaging you some explicit things at two in the morning because they’re bored,” Schiff says.

One con is that Tinder has a reputation for being more of a hookup app. “Although plenty of serious couples have found one another on Tinder, some who may be more conservative or looking solely for a monogamous relationship may be less likely to use Tinder as an option,” Martinez says.

It is important to note that Tinder doesn’t consider itself a hookup app. In fact, Many serious couples have found one another on Tinder like Sarah, 25.

“I’ve found most of my relationships via Tinder, and as a 25-year-old queer woman who prefers women/female-presenting, there are many pros and cons,” Sarah tells Bustle. “Tinder is a great way to explore your sexuality, find people who have similar interests, and gain a sense of control over who you date. However, both Tinder and Bumble can be very straight-oriented.”

According to Statista, more than 75% of the app’s users identify as men, so finding women to match with can be more challenging. “Sometimes I’m shown just men and have to keep switching back and forth between ‘everyone’ and ‘women only’ just to have an accurate variety,” Sarah says.

Should I Use Bumble?

Bumble was initially made for dating but has expanded to become a platform for making connections of any kind. They have options to search for friends or career mentors. According to a 2021 Bloomberg report, Bumble had over 42 million active monthly users as of January 2021. Originally, it was designed to be an app that empowers women to make the first move once a match is made. In same-sex or nonbinary matches, there’s no restriction on who can message first.

Using the app is pretty simple. To create a profile, you’ll just need to add some photos and fill out the About Me section, verify your profile so people know you’re really you, and fill out some Basic Info Badges like what you’re looking for, your height, zodiac sign, political affiliation, and more. You can even add your Instagram account or fill out a profile prompt for people to get a better idea of who you are.

They also have paid features and a premium subscription option to help you maximize the experience. These paid offerings include unlimited access to advanced filters like education level, height, and feelings about having kids. Bumble also has a travel mode that allows you to change locations to another city before you get there, an ability to rematch with people whose matches have expired, and more.

“Bumble, in my opinion, is a great option for someone who is newer to online dating and may be looking for something more connected and intimate,” Martinez says. “It requires the woman to make the first move, which is a pro for men as it takes the antiquated pressure off being responsible for small talk or beginning a conversation. It’s also a pro for women who may be more extroverted and willing to let someone know they have interest.” For some, it can also feel like a safer option than other dating apps where anyone can just message you regardless of whether or not you’re a match.

If you’re someone who doesn’t like messaging first, Bumble may not be for you. Although there is an Extend feature that allows matches to show you they’re really interested, you could still miss out on someone great if you don’t take that first step. But according to Schiff, Bumble’s model of restricting who messages first still works because it can result in more quality conversations, dates, and maybe even a long-lasting relationship.

Marisa, 25, from San Antonio has used both Tinder and Bumble and says there are pros and cons to each. “I chose to sign up on Tinder specifically because I had several friends who met their boyfriends there, even though at the time I wasn’t looking for another serious relationship. I liked how easy it was to build your profile, but the simplicity makes it a little harder to select a match based on personality or common interests,” she tells Bustle. For her, matches on Tinder felt a little shallow.

Bumble, on the other hand, is fun to swipe through, especially with the prompts you get, she says. “I think it gives you a better feel of who’s on the other end too, so I’ve had better dates from Bumble than Tinder,” Marisa says. “The con that I think every woman would agree on, though, is that the woman has to message first. Sometimes it’s hard to think of a good intro message that isn’t just, ‘Hey.’”

Overall, the best thing to do is try both apps for a few days to see how you feel. You never know — you could meet someone on Tinder that you really click with right away, or you may find that messaging first isn’t as intimidating as it seems once you’re on Bumble for a few days.