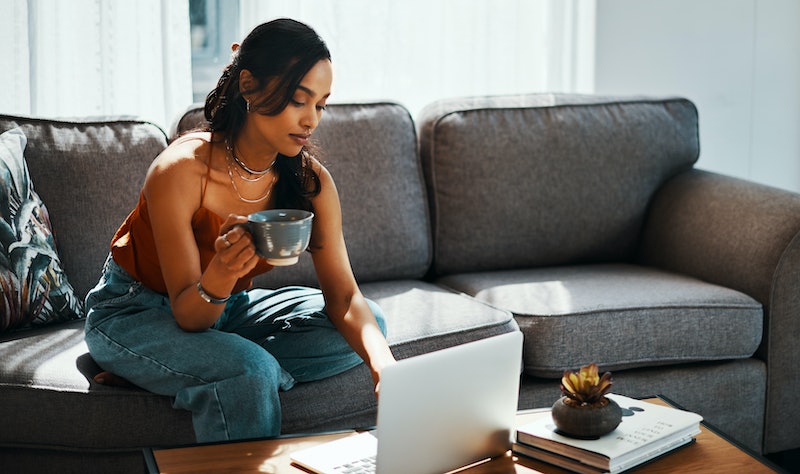 Ever feel tired or icky the morning after a night of drinking? Turns out something similar can happen after consuming weed. If you've ever felt dehydrated, fatigued, or a little foggy after an evening of smoking or consuming edibles, chances are you're on the hunt for some tried-and-true weed hangover remedies.

Though the after-effects of weed are disputed (and some people don't have any hangover at all), if you're feeling off after consuming cannabis, it typically has to do with how much you ingested. "[Weed hangovers are] caused primarily by getting too much of the active ingredients in cannabis," says Dr. Jordan Tishler, a cannabis specialist and CEO of inhaleMD. "These chemicals, like THC, bind to receptors in our brains and elsewhere." When that happens, they can stimulate a response in your body that leads you to feel high or relief from pain, he explains, but high doses can overload the system. What's considered a high dose depends on a person's tolerance level and other factors combined with what type of weed you're ingesting, but it helps to look at a THC calculator to figure out the right amount for you.

If you do enter the too-high-of-a-dose threshold, though? It can cause "a slow return to normal function," says Tishler. Luckily, there are ways to quell those unpleasant next-day symptoms of one-too-many tokes. Below, experts share their top recommended weed hangover remedies to help you combat that post-smoke slump.

Sometimes the only way out is through, says Tishler. Similar to alcohol hangovers, there's no magical cure that will make you feel 100% in a flash (unfortunately). "Cannabis hangover usually resolves in a few hours on its own," he tells Bustle. "If a particularly high dose was taken, the feeling can persist for a few days. But it will resolve. As we say, 'tincture of time' is all that is needed."

That said, water can never hurt. Though chugging H2O won't cure your weed hangover, it could help offset some dehydration or fatigue you accumulated the night before, says Tishler. Perhaps you were dehydrated before you started smoking or forgot to drink water while you were high. If that's the case, replenishing with water before, during, and after smoking can help you stave off some of that hangover unpleasantness.

Sometimes the best way to remedy a weed hangover is to prevent it from happening in the first place. Start by ingesting the right one for you, suggests Chris Roth, founder of CBD brand Highline Wellness and THC line Reform Wellness. There are two main types of weed to choose from: indica and sativa. Indica tends to produce more of a body high, which Roth says makes it the ideal strain to smoke at night before bed to help you fall into a deep sleep. "Remember: indica, 'in da couch,'" he says.

Sativa, on the other hand, often creates more of a head high that's better suited to activity. And weed hangover symptoms can happen when you take the wrong strain for the wrong occasion. For instance, sativa before bed might keep your brain stimulated and mess with your sleep so you feel less-than-perfect in the a.m. The reverse is true as well: Taking indica before a daytime activity may zap your energy due to the ensuing grogginess and relaxation.

Roth also recommends trying Delta 8 THC, a chemical compound from hemp that people report is a lighter version of THC, the main psychoactive ingredient in most weed products. It provides just enough of a high to relax your body and take the edge off, says Roth, which may mitigate not-so-ideal effects the morning after. So, basically: Consume with a plan.

Besides finding the right weed for your circumstance, it's equally important to find the right dose for you, according to Tishler. If you recreationally consume weed on the regular, stick to moderate amounts, he recommends. "Repeated high doses can cause longer-term changes to your receptors that form the basis of tolerance, which is something we’d like to avoid." That's because building up a tolerance can mean consuming larger quantities of weed and, potentially, more hangovers.

If you consume weed medicinally, he suggests working with your doctor to find the appropriate dose for your needs.

5. Try CBD For Your Hangover

Perhaps you're familiar with the phrase "hair of the dog?" Turns out this applies to weed hangovers as well, as some people swear by CBD as their go-to morning-after remedy. CBD is a nonintoxicating compound of weed that research shows can help relieve anxiety without producing much of a high. While it won't cure the side effects of dehydration or lack of sleep, CBD can help you relax when your hangover leaves you feeling jittery and tense, says Roth. It comes in many forms: try gummies, oils, or smoke it the old-fashioned way to start feeling the calming benefits of this weed hangover remedy.

Dr. Jordan Tishler, MD, president of the Association of Cannabis Specialists, instructor at Harvard Medicine, and CEO of inhaleMD