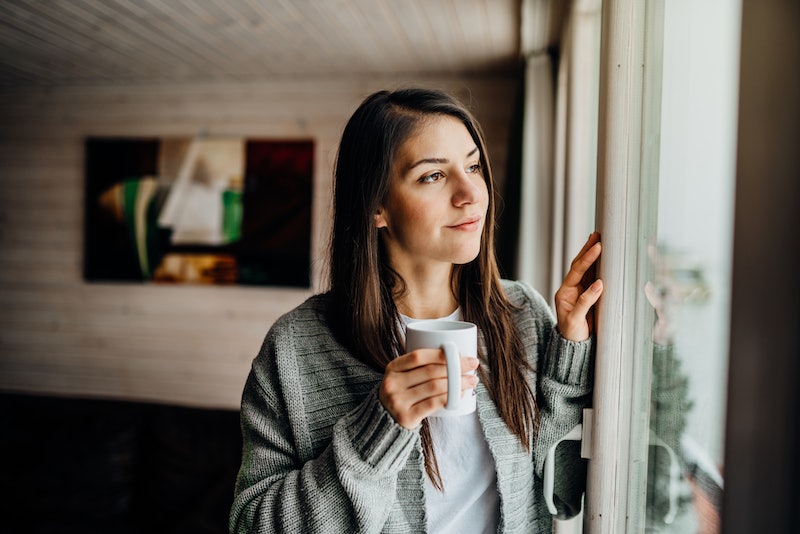 Trae, 28, had no idea she was about to spend four months in solitude, totally single. She and her boyfriend were in the middle of making post-pandemic travel plans when he "came out of left field" and ended their relationship a few weeks into quarantine. Typically, Trae would have reacted to the heartbreaking news by booking a trip with friends, seeing a concert, hitting up local bars — anything to take her mind off things. But since her city shut down, none of that was possible.

Faced with the lack of social distractions, Trae tells Bustle healing from a breakup in quarantine was nothing short of a "roller coaster." Instead of traveling, she watched TV series, and instead of waving a lighter at a concert, she began reading through a pile of forgotten books. She also spent time coming to terms with what happened, which included fully feeling all her emotions — something she now recommends to anyone going through a similar situation. "The more you do, the quicker you heal," Trae says. "Cry it out, like ugly cry, [and] the next day you'll feel better."

Of course, coping with a breakup in quarantine can also mean experiencing bouts of anxiety, due to finding yourself alone during a global crisis. This is why a recent breakup was extra difficult for Michelle, 23, who had been staying in, watching movies, and cooking meals with her boyfriend. They'd created a "protective layer," she tells Bustle, and she expected to ride out the rest of quarantine in comfort. But then he ended things a few weeks later.

"Once I was alone, I was forced to confront the reality of the situation — that the world was in a crisis, that nothing would ever be the same, and that I didn’t have someone by my side to help me through it all," Michelle says. "There were intense feelings of loneliness and isolation, and it felt like I had lost all sense of normalcy; I had lost not just the physical world I knew, with its social gatherings and dine-in restaurants and day-to-day operations, but the world I had built around my ex."

How could he freakin' abandon me during a pandemic?

Michelle began taking walks and talking on the phone with loved ones. "During the first two weeks, I could not stand one hour without calling a friend," she says. When that wasn't an option, she turned to podcasts about relationships. "I needed to fill the silence and feel like someone was talking to me," Michelle says. "That’s how lonely I felt after the breakup." She also experienced a lot of anger, which was fueled by the question, "how could he freakin' abandon me during a pandemic?"

According to Amanda Villaveces, LMFT, a licensed marriage and family therapist, these post-breakup feelings are always justified, but the pandemic can make them worse. "We are very limited in our scope of control when it comes to creating new hobbies and spending time with friends," she tells Bustle. "In addition, we are also in a place globally that can lead to higher levels of stress, isolation, anxiety, and depression." She agrees it's helpful to reach out to friends and family for support, since sharing the narrative of a breakup often makes it easier to process. She also recommends practicing a little self-care whenever feelings of anger or sadness arise, such as mindful breathing or yoga.

This appears to be the silver lining of healing from a breakup while in quarantine: It offers plenty of time to focus on recovery — without distraction. Emily, 28, says she broke up with her boyfriend in the middle of quarantine, and after experiencing "literally every emotion possible," finally began to heal. "At first, coping was really difficult because I wanted so badly to numb the pain I was feeling with a wild night out with friends, a girls’ night in, or [online] dates," she tells Bustle. But instead of running from her problems, which she admits would have been the case in non-COVID times, she sat with them, took self-love workshops, meditated, and spent more time focusing on herself.

"I’m still very much in the healing process," Emily says, "however, what makes this breakup different than others is that I’m actually learning to love being alone and it’s been a wonderful journey so far."

More like this
18 Hinge Prompt Answers To Try If You’re Looking For Something Casual
By Lexi Inks
5 Signs You Have A Toxic Relationship With Yourself
By Lexi Inks
Why We Love Investigating Friendship Breakups
By Carolyn Steber
My Partner Wants Me To Wear A Diaper During Sex. Help!
By Sophia Benoit
Get Even More From Bustle — Sign Up For The Newsletter
From hair trends to relationship advice, our daily newsletter has everything you need to sound like a person who’s on TikTok, even if you aren’t.