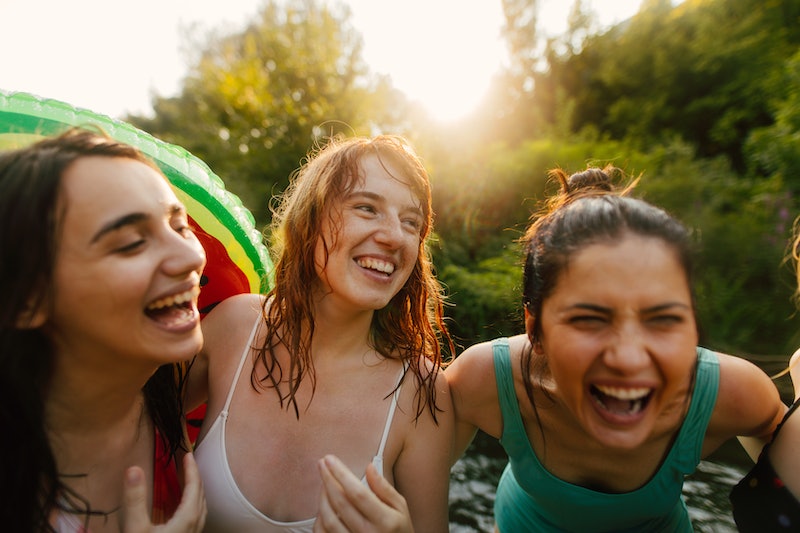 If you've ever really wanted to get to know yourself, you’ve probably looked up the Myers-Briggs type indicator test (MBTI). You’ve likely seen the combination of four letters everywhere from TikTok bios to LinkedIn resumes. If you're not that familiar, the MBTI is a self-reporting questionnaire that helps you figure out what kind of person you are, depending on how you answer questions and the way you make choices.

“As a therapist, I do often suggest people take MBTI self assessments (along with other instruments) because I think they are valuable as tools for reflection and connection,” Jenny Campagna, M.S. L.P.C.C. tells Bustle. “To be able to have some studied framework to say, ‘Hey that sounds like me’ or ‘That’s not true at all,’ can be useful in terms of communication with others — it can be bolstering to be able to say, ‘I do that’ or ‘I see things in this way because I have this amalgamation of traits’,” she adds.

What’s The Most Common Personality Type?

The two biggest distinctions between sets of personality types are introverted and extroverted types. While there are other sub-distinctions, the biggest traits that make us different from one another, on a psychological level, are whether we gain energy or lose energy from being around other people, and just exactly where we fall on the scale between the two. In addition to our general outward attitudes, the MBTI helps us understand our preference of perception, whether it's lead by sense or intuition, and our preference of judgment, whether it's lead by thinking or feeling. When you multiply these four traits by each other, you’re left with a total of 16 different options for personality types.

The most popular Myers Briggs personality type is ISFJ — 13.8% of the tested population falls under the introverted, sensing, feeling, and judgment classification. Neuropsychologist Sanam Hafeez, Psy.D. tells Bustle that ISFJs have an “exceptionally high emotional maturity,” which means that they are naturally skilled at assessing and understanding their own emotions with more efficiency and accuracy than other people, who might have a harder time making distinctive choices regarding their self-perception.

On the other end of the scale, representing just 1.5% of the population, is the least popular personality type, the INFJ personality. That makes those who identify with introversion, intuition, feeling, and judging the most rare kinds of psychological personalities. If you're wondering how one personality type can be so rare, it's partially because this personality type is so lead by feeling, and is so tightly associated with being a people-pleaser, that it can often bleed into other classifications. People who are truly INFJs have a tendency to view themselves differently that other people might perceive them. INFJ personality types are often said to have abstract thinking processes and communication tendencies. These traits can make the way a person who is of the INFJ classification see themselves in many different ways.

Another reason why INFJs are so rare is simply because they're unique. Sometimes called empaths, counselors, or healers, INFJs are incredibly emotionally intelligent, have an extreme ability to connect with others and a special way of connecting with themselves. They're basically the unicorns on the Myers-Briggs scale, meaning that they're incredibly valuable to have around. If you have one in your life, they're likely the person who understands you the most, who sees you the clearest and whom you have the most intimate relationship with. Basically, you're lucky to have an INFJ in your corner.

From a scientific perspective, it’s worth taking your MBTI results with a grain of salt. The test was created by two women without formal psychological training, as a 2021 HBO documentary publicized, and it has been criticized — particularly as a tool in job interviews — for promoting “false and dangerous ideas about race, gender, and class that drive bias and discrimination,” the Guardian wrote. Still, if it helps you understand yourself, or connect with others more meaningfully, there’s no harm in seeing if your type is one of the most or least common.