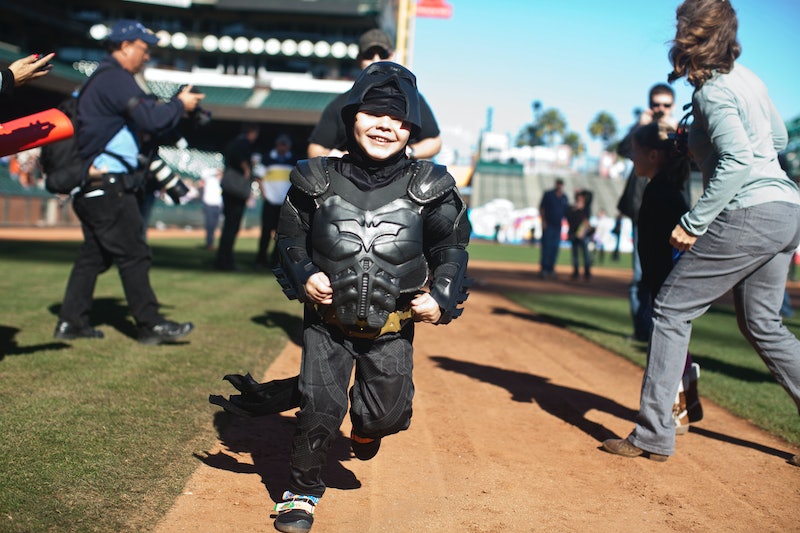 If you turned on the news at any point during this past year, you'd be forgiven for thinking America is all doom and gloom. That ridiculous government shutdown! The slowly heating planet, gun violence, NSA surveillance, Congress in general ... and did we mention the Red Wedding on Game Of Thrones ? But the U.S. isn't just the catastrophic hell-hole that you see on the news: good things still happen in this world, and a lot of great stuff happened in America in 2013. Here are our top five picks for the year's good news:

1. Crime Rates Are Falling To A Historic Low

Here's looking at you, Batkid. Though violent crime is usually on the up during rough economic periods, it actually plummeted in 2013 to a whole new low. In fact, the last time murder was this rare in the U.S. was during World War II. Hard to believe, we know, what with all the horrific mass shootings in 2013. But the numbers don't lie.

Violent killing has dropped by two percent since 2010 alone, meaning 280 less Americans were killed this year. (OK, this is a weird sort of good news, but we'll take it.) Rape, robbery, and severe assault is down by a whole four percent. And this downturn has been happening for a while: analysts say that it might have to do with a bigger chunk of the population being elderly and a better police presence. We've got our theories...

2. The Ozone Hole Is Closing Up

If there's one news topic that never seems to bring good cheer, it's climate change. This year, we learned plenty more about the hot and potentially inhospitable planet that we're creating. But there was some good news, and it's been going on for some time: that pesky hole in the ozone is actually closing.

The hole has been growing over Antarctica since the eighties, no thanks to chlorofluorocarbons, the ozone-busting chemical in aerosols and fridges. And without the ozone, the sun is far more damaging. But, as Celine Dion might sing, it's all coming back to us now: The ozone hole is actually the smallest it's been in 10 years, and is still shrinking. Ever since those nasty chlorofluorocarbons were phased out of use, the ozone has been rewarding us with, well, less holes in its protective layer.

Must be why we're living so damn long. Ten years ago, fruit was the fifth most-eaten food in the country — yup, there are market-research firms that keep track of this stuff — and now it's climbed to the number two spot. Fruit juice, which actually isn't all that good for you, is growing less and less popular, while actual fruit keeps making gains. Oh, and soda's not growing as much as its humble competitor, bottled water, which is gaining in popularity.

Is it because Apple ousted Coca-Cola as the world's most valuable company? Is it because Michelle Obama announced that drinking water was one of the best changes you could make to your diet? Is it because juicing is this year's hottest masked eating disorder? There's no way of knowing, but obesity in the general population has leveled off as a result.

Watch out, immortality. We're coming for you.

We've all heard about the prevalence of abstinence-only sex education — which, to nobody's surprise, leads to a much higher teen-pregnancy rate than in areas that promote, ya know, contraception. But don't fret just yet, because there is good news: the teen-pregnancy rate has hit a historic low. Not just amongst one demographic or in one state — but in every state, in every race, and across all ethnicities in the nation. It's actually the lowest the teen pregnancy rate has been since the government started collecting the data 73 years ago.

5. So Many Shitty Men Have Been Ousted From Power

Great news, guys: Mitt Romney still isn't president. He can now be found pumping gas, grocery shopping, and defending his son, Josh Romney, for posting a "humblebrag" selfie by a car crash after he rescued the passengers. Anthony Weiner and his penis didn't even come close to being New York's mayor. Rob Ford has been reduced to a figurehead, with little more power than those bobbleheads he tried to peddle to Canadians. Bob Filner went to jail (albeit briefly) and is absolutely no longer mayor of San Diego. (Even Hooters banned him.)

More like this
Here’s Where The NHS Nurses’ Strike Currently Stands
By Sophie McEvoy
Watch Jacinda Arden’s Devastatingly Honest Resignation Speech
By Sam Ramsden
What The UK Blocking Scotland’s Gender Recognition Bill Means
By Sam Ramsden
Here’s What Health Means To People In 2023
By Isabella Biedenharn
Get Even More From Bustle — Sign Up For The Newsletter
From hair trends to relationship advice, our daily newsletter has everything you need to sound like a person who’s on TikTok, even if you aren’t.