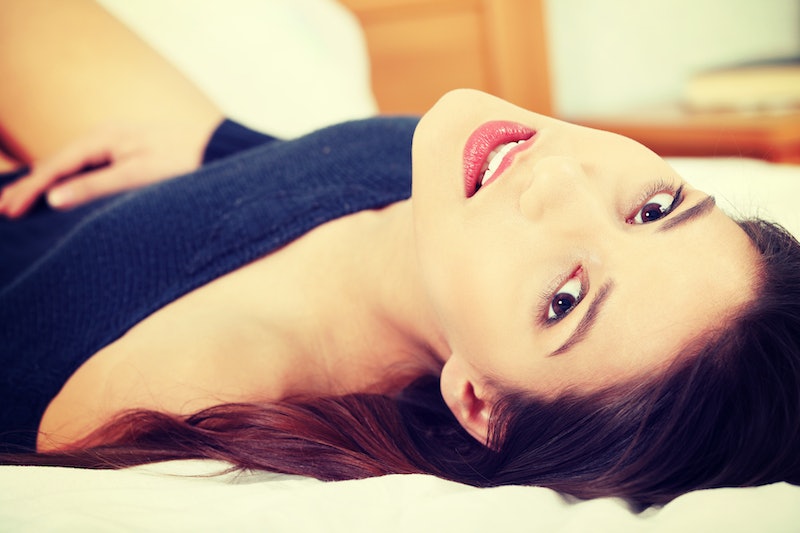 But I'm not complaining. Many have taken to the internet this year to make some good jokes about the day, and sex toy company LELO compiled a list of eight reasons we should all have more orgasms. And if you haven't experienced an orgasm yet, you're definitely not alone — but the odds of eventually having one do look good. Treat today as a day to celebrate pleasure the best way you know how.

If looking younger, sleeping better and feeling happier and less stressed are desirable, then sign yourself up for a round or two of Orgasm Day festivities. Here are 10 rationales to take National Orgasm Day seriously, ferry it transcontinentally, and trot it out on a daily basis.

1. Look Up To Seven Years Younger With 4+ Orgasms Per Week

In a survey of 3,500 people, those who had more orgasms appeared younger, found Dr. David Weeks, a British consultant clinical psychologist and former head of old age psychology at the Royal Edinburgh Hospital, reports Lelo. Ranking second to physical activity, a high-powered sex life is a major player in determining a person's youthful appearance. Since sex is physical activity, kill two birds with this one.

2. Your Orgasm Bank Is Infinite

There's no limit to the amount of orgasms any given person can have in a lifetime. “Fortunately for all of us, orgasms aren’t like teeth — we all have the potential for an infinite number,” Planned Parenthood doctor Vanessa Cullins told Refinery29. So don't feel guilty for having an active sex life — congratulate yourself for it instead.

3. An Orgasm Is Like A Valium And An Aspirin Combined

Orgasms produce high levels of the hormone oxytocin, which fights off stress and relieves pain all at once. Released from nerve cells in the hypothalamus, studies have shown that the "love molecule" sets off feelings of optimism, self-esteem and trust. Other studies have found that oxytocin can act as a pain-reliever similar to aspirin, helping with headaches, cramps and body aches, Lelo says.

A brain activity study found that "at the moment of orgasm, women do not have any emotional feelings." Perhaps an orgasm is the only time in an entire day this happens, but it sounds to me like a welcome respite. To get to the point of orgasm, any difficult feelings have to be put aside. “Fear and anxiety need to be avoided at all costs if a woman wishes to have an orgasm; we knew that, but now we can see it happening in the depths of the brain,” reports the study.

A lovely chain reaction: Orgasms release endorphins, which increase levels of Immunoglobulin A, which ups our immune systems. "According to the British Medical Journal, there's a strong correlation between orgasms and mortality rates," says Lelo. And if you have two or more orgasms per week, you can add up to eight years to your life, as these little micro-miracles boost not just immune system, but heart health and brain power, Lelo reports.

The release of oxytocin (and vasopressin) leads to releases of melatonin, which helps with sleep, says LELO. Plus, an orgasm is tops for combating anxiety and prepping you for a solid night of sleep.

It's possible to train yourself to have better orgasms, says Lelo. As they report, “Your intimate muscles are like any other muscle: their power and efficiency improve with a regular workout," says Dr. Ian Kerner, author of She Comes First . "It doesn’t need to be a long, tiring, training regimen. You can begin right now, wherever you are: just squeeze your Kegel muscles for 10 seconds and release, then start again as many times as you want throughout the day.”

8. Forgo The Antidepressants For ... Semen?

Women who have unprotected sex are less likely to be depressed, found a study from the State University of New York, says LELO: "Semen contains a hefty cocktail of molecules, including mood-elevating estrogen, oxytocin, cortisol and melatonin, antidepressant prolactin, and thyrotropin-releasing serotonin."

They improve with age. The LELO Global Sex Survey finds that just 4 percent of women are satisfied with their orgasms, and only 31 percent get off during sex. Eek! But as women get older, they find more satisfaction (big ups, Mick Jagger!), with more than 75 percent of women over 60 years old feeling more satisfied and having more orgasms during intercourse. Something to look forward to!

Healthier, smoother skin is just a few orgasms away, reports Chatelaine, thanks to increased estrogen levels. "This increase in estrogen also helps to protect us from heart disease, osteoporosis and Alzheimer’s disease," they say. "Not only that, but the more sex you have, the more your partner will want it; when we are more sexually active we give off more pheromones, the chemicals we produce to increase the interest of the opposite sex. It also promotes the production of collagen, which keeps the skin supple and gives you a healthy glow." Also, news flash: It feels pretty good too.