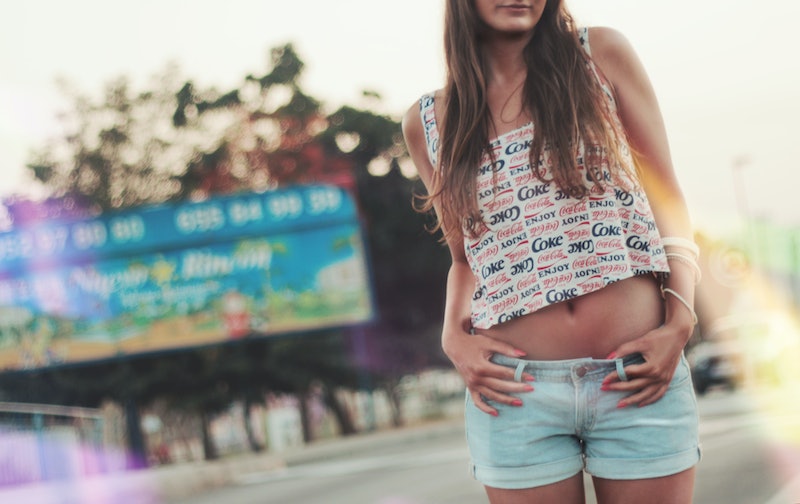 Despite the many promising advancements feminism has made in recent years, gender inequity is unfortunately still a pervasive problem. As it relates to sexual behavior, there are a lot of unfair expectations and antiquated ideals about how both men and (especially) women should conduct their bodies. Even though it should be common sense by now that anyone should be able to do whatever they want with their own body without fear of judgment, sexist double standards still exist and, according to a new study, can start affecting us as soon as we've reached sexual maturity.

Researchers found that while teen boys seemed to gain popularity and social acceptance after having sex, teen girls' social networks shrank afterwards. The data for the study comes from a group called PROSPER, which examined groups of students from rural Iowa and Pennsylvania in five different waves, starting in sixth grade and ending in ninth grade. Students completed in-home surveys that asked them to nominate their closest friends, and researchers identified peer acceptance by looking at how these "nominations" changed over time in relation to measures of their sexual behavior.

During waves where they reported having sex, boys' peer acceptance increased, on average, by 88 percent; meanwhile, girls' popularity after having sex decreased by 45 percent. Another interesting finding of the study is that boys who engaged only in "making out" saw a 29 percent decrease in peer acceptance, mostly from their male friends, whereas girls who did the same experienced a 25 percent increase in popularity.

"Men and boys are expected to act on innate or strong sex drives to initiate heterosexual contacts for the purpose of sex rather than romance and pursue multiple sexual partnerships. In contrast, women and girls are expected to desire romance over sex, value monogamy, and 'gatekeep' male sexual advances within committed relationships. A sexual double standard then arises because women and girls who violate traditional sexual scripts and have casual and/or multiple sexual partnerships are socially stigmatized, whereas men and boys performing similar behaviors are rewarded for achieving masculine ideals."

In short, girls are expected to want love, not sex, while the reverse is true for boys. Researchers noted that these results are consistent with "traditional gender scripts" in which boys are lauded by their peers for being sexually active while girls are shunned for the same behavior. The outdated notions about female virginity no doubt drive these teens' social networks, even if they don't realize it. Even as our world becomes increasingly sex-positive, this study shows that even from our earliest sexual experiences, girls are being taught that casual sex is for men and monogamy is for women.

Although this isn't exactly surprising, it's indicative of a larger social problem: The numerous double standards that women face, even in an age where feminism and equality are hot-button topics. Here are five more examples of ways women experience sexism in their daily lives — let's all do our best to remember that the sexes are equal, and hopefully these will disappear eventually.

In an age when there are plenty of amazing, successful female businesswomen to admire, it seems that men are still threatened by the idea of a female being in charge in the workplace. A recent study found that, whether consciously or unconsciously, men feel threatened by female bosses and the authority they possess. It's a scenario we're all too familiar with: While a male boss who is standoffish is "powerful" or "tough" or "confident," a female boss is a "bitch" or "bossy" or (if you're Donald Trump) "bleeding out of her wherever." It's great that there are so many women paving the way and breaking the glass ceiling, but we still have a long way to go before workplace power dynamics are trulyequal.

Uhh, does anyone else remember #Gamergate and the horrible, sexist comments it inspired? Women who enjoy typically masculine hobbies, like video games or comic books, often face a ton of cruel, unnecessary, sexist backlash. As one man, a self-proclaimed nerd and feminist, points out, "the geek community sometimes has an uneasy relationship with its female members." From the hyper-sexualization of female video game characters to the blatant misogyny that can be found on many male-centric Internet forums like Reddit, it can be hard to be a female nerd. But hey, it's 2015, so can everyone please wake up and realize that certain interests are not gender-exclusive? Let's all just play nicely and share the things we love with one another, regardless of our genitalia.

It goes without saying that there are some seriously badass female athletes, professionally and otherwise. However, that also comes with a certain stigma, like that they are all "butch" or "masculine," as if athleticism and femininity are mutually exclusive. It also generates a ton of body-shaming: Recently, female athletes made headlines for showing how proud and confident they are with their amazing, beautiful, strong as hell bodies. No one would taunt LeBron James for his huge biceps, but a female athlete with comparable guns is likely to face all manner of derogatory, hurtful comments. It's sad that women who work so hard and whose bodies are capable of such amazing feats of athleticism have to deal with sexist, degrading comments, all because they don't have penises.

Wouldn't it be nice if everyone could just agree that how a woman presents herself to the world is her business and no one else's? Unfortunately, studies have shown that there are tons of conflicting opinions about the "best" looks for a woman, and that often, this conversation is driven by men. According to a 2014 study, men preferred women with less makeup, but women assumed that men would prefer more makeup, probably because of the impossible standards of beauty we see in Hollywood every day. Similarly, lots of men have strong opinions about women's pubic hair, something that in no way affects them, and these male opinions unfortunately influence how many women choose to groom. Sure, body-shaming affects both men and women, but I think it's safe to say that women face tons more pressure in the looks department. We should all agree to give it a rest and accept the faces and bodies that people present to us, without comment.

More than us "normal folk," female celebrities face a ridiculous amount of scrutiny when it comes to their physical appearance and sexuality. When Justin Bieber uploaded a photo of his bare ass to Instagram, did hordes of Internet trolls take to the comments section to call him a "slut" or "whore"? Probably not. Meanwhile, Miley Cyrus gets bashed almost daily for her ~lascivious~ nipple photos and continued support of the #FreeTheNipple movement. Despite the fact that many have pointed out how it's nearly impossible to distinguish between male and female nipples, it seems Instagram is still uncomfortable with women showing their full boobs online. Women face much more backlash for choosing to bare all, but are often hyper-sexualized by others; this shows the implicit discomfort our society has with female sexual agency, and the unfortunate problem of objectification many women, particularly celebrities, still face.

More like this
Help! My Partner Only Wants Sex Late At Night & Won’t Compromise
By Sophia Benoit
Ask A Sex Therapist: Is My Sex Fantasy Normal?
By Madison Malone Kircher
What Mercury Retrograde Spring 2022 Means For Your Sign's Sex Life
By Nina Kahn
The Most Compatible Life Path Numbers, According To Numerologists
By Kristine Fellizar
Get Even More From Bustle — Sign Up For The Newsletter