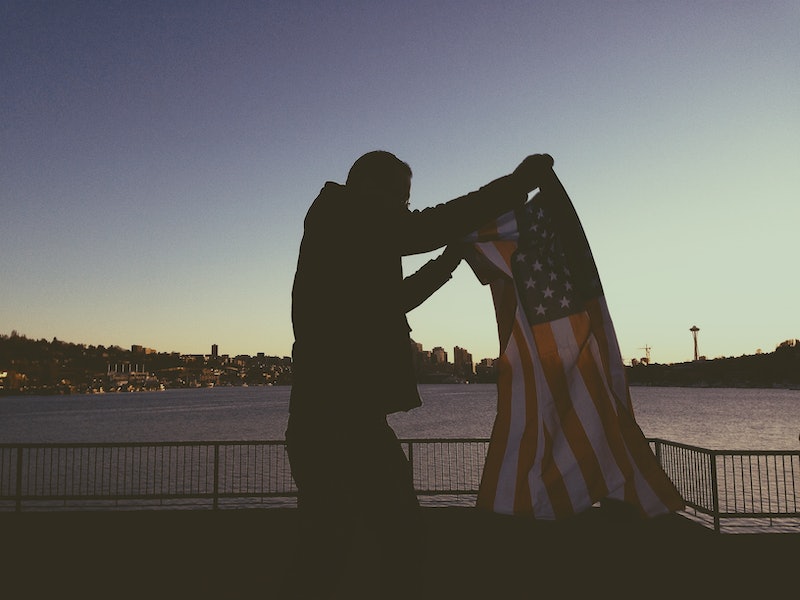 We Americans are a competitive bunch. We fight tooth and nail to support our sport teams and cheer on our favorite contestants on The Voice, and we like to fly our flag high and boast that we're the land of the free and the home of the brave. Best country in the world, right? It seems that we're ignoring the hard truth, though — in the race against other developed countries, many of whom are our allies, the United States is falling behind on so many accounts, and this losing streak is the most significant one, with devastating effects that manifest in the lives of our fellow citizens.

There are so many things we need to work on if we ever want to call ourselves number one. Incarceration rates, literacy, infant mortality — the list goes on, but we still haven't done much to address these primary issues. I mean, there are still politicians arguing over whether we should limit poisonous pollution and whether climate change is actually a thing, while numerous other nations have recognized the rights of nature long ago. As much as we're entitled to be proud of our home country, we should know the hard facts before we get all star-spangled excited.

Here are some of the ways the United States needs to catch up to much of the rest of the world — STAT.

The United States has the most expensive (and least effective) healthcare in the whole world, and it would be silly to think the cost relates to its effectiveness. Last year, the Commonwealth Fund released a report called "Mirror, Mirror on The Wall — 2014 Update," ranking the top medical care systems by countries. We came in at number 11, behind the U.K., Switzerland, Australia, Germany, France, and Canada, among others. Because we still haven't quite the grasped the concept of universal care, far too many of our neighbors and friends and family go without the medical attention they desperately need.

Although this data was collected before President Obama's Affordable Care Act went into full effect, many experts think the issues are so deeply rooted that just addressing accessibility won't do nearly enough to fix our broken system.

In terms of efficiency, the report says that medical professionals constantly face difficulties "receiving timely information, coordinating care, and dealing with administrative hassles." This leaves them frustrated and unable to care for their patients effectively, and so much time is lost in the organizational muck that people's time-sensitive ailments aren't taken care of properly. The proof shows up in our life expectancy — we're scheduled to die sooner than people in 25 other countries, including Canada and Slovenia.

The majority of below-average income American families report not seeing physicians, not going to get the appropriate treatments administered, and skipping out on the medications that have been prescribed to them. A whopping one-third of lower-income individuals said they went the whole year of 2014 without any care at all — there was simply no way they could afford it.

The United Kingdom government spends only $3,405 a year on healthcare for each person, and they've adopted easy-to-use information systems so that doctors can swiftly treat patients. Plus, every individual has their own doctor. Anybody taking notes?

We're the only industrialized nation in the world that doesn't grant women maternity leave at the federal government level. The decision is entirely left up to each individual state or the individual employer — and not all of them are stoked with giving us time off to, you know, bring a new life into the world. Most states that do provide time off, like Hawaii and Washington, only offer it as unpaid leave, leaving mothers with massive bills to pay, which results in their having to return to work sooner than they should have to.

Compare these policies to other countries around the world and you'll cringe in embarrassment. For example, soon-to-be mamas — and dads, to boot — in Denmark get up to a full year off with pay if they work in the public sector; the Brits get 280 days at 90 percent pay; and the Netherlands offers their ladies 112 days at full pay. What are pregnant American women promised? Literally nothing — unless, of course, we happen to work for a progressive, caring employer who feels like going against the grain.

For further proof that we're not taking care of our pregnant ladies, take a look at the shockingly high maternal mortality rate in the United States. There are more women dying in childbirth than decades prior — 60,000 women a year to be exact, and many fatalities aren't even being counted properly. Systemic issues this serious show that we need to do a better job at looking after all the mothers out there.

American adults don't stack up well against the rest of the world when it comes to basic skills like math, reading, and problem-solving. In fact, we score below the international average, according to a recent study by the Organisation for Economic Co-operation and Development. In terms of problem-solving in a technology-rich environment, we scored toward the very bottom, far behind Japan, Australia, and Sweden. Multiple other countries surpassed us in simple activities like calculating mileage reimbursement to a salesman and comparing food expiration tags at the grocery store.

Research also proved that there is a huge gap between the literacy of those who have college-educated parents and those who come from low-income families and/or are minorities. This is especially disturbing, Jacob Kirkegaard, economist for the Peterson Institute for International Economics, tells the Associated Press, because it is perpetuating an underclass of individuals who are not employable. It's clear that our education system has been failing to teach the same skills to all individuals, equally, regardless of race and socioeconomic status.

In America, we're seeing more anti-abortion lawmakers make their way into Congress, making it more difficult to find a clinic that will offer this procedure.

Clinics in various parts of the country are shutting down at a rapid pace, and there are four states — North Dakota, South Dakota, Mississippi, and Wyoming — where only one abortion clinic exists. This is partly because the new laws being passed are specifically targeting clinics, not individuals, leaving them no choice but to close their doors.

While there are still a huge number of women who were willing to travel to another state to have the right to choose, the impact these decisions have on those who cannot make the trip results in a 15 percent drop in abortions and 4.2 percent rise in birth rate. We've got a strong group of activists who are pushing back, and they are reminding the world that reproductive rights are, indeed, human rights.

Neighboring Canada picked up on this back in 1988, when their Supreme Court ruled that abortion restrictions were unconstitutional; now, termination is legal at any stage and it's covered by health insurance plans in registered hospitals. Since 1987, Latvia has offered abortion to women "within the first 28 weeks" — without needing a severe medical reason — as long as they have approval of a medical commission, which isn't hard to come by.

Around the world, we are teased for being the kind of people who live to work instead of work to live. Unfortunately, we're not really left with many other options.

The United States is the only developed nation in the world that doesn't legally require employees to have paid vacation time. Like maternity leave, you just have to hope you work for a boss who isn't a jerk. Finland, just to name one of many, federally insists that their people have holiday and vacation time every year — while still receiving their wages. Every country in the European Union gives their citizens four whole weeks off annually, paid as well.

If we think we're drawing a direct correlation between productivity and time spent at the office, we're sorely mistaken. There are four other nations — Switzerland, Singapore, Finland, and Germany — who are far more productive than us, and they all value a solid holiday. Research actually shows that employees get more done after they've come back from vacation, tan and relaxed.

Brigid Schulte told The Washington Post that the United States ranks at the very bottom in work-life balance. All this work and no play is also ruining our personal lives, leaving us chronically stressed out and unhealthy on so many levels.

We sure know how to create prisoners, and lots and lots of them. Americans make up five percent of planet Earth's population, yet we put nearly 25 percent of the world behind bars. Before the '80s, we had a pretty reasonable number of incarcerated individuals — 110 persons per every 100,000 — but the "tough on crime" policies that were ushered in turned a sad page in our history. Now, almost 700 out of every 100,000 people are doing time. Put this statistic side by side to other nations: there are 80 out of every 100,000 French citizens in prison, 98 Germans, and as many as 148 out of every 100,000 in England and Wales, considered the highest rate in Western Europe.

Marc Mauer, executive director of the Sentencing Project, told The New York Times that the assault rates between New York and London are pretty much on par with one another (unless firearms are involved). Other experts confirm his sentiment by claiming that our hastiness to toss people away isn't producing any reform in crime whatsoever. Besides, we're the only developed country who administers severe prison sentences for completely non-violent crimes, such as passing bad checks or having crack cocaine on you.

How long people stay behind bars is also a factor that separates our policy from that of our peers; the American penal system is much more punitive, so we've got a disproportionate group of folks in prison for extended periods of times. Let's not forget our tendency to lock up people of color. For every 100,000 individuals behind bars, over 2,000 are black and only 380 are white.

Even more disturbing is the fact that our prison industry complex is a huge business; it's one of the fastest-growing industries in our country — worth millions and millions — and the economic elite are benefiting from it. Individuals behind bars are forced to perform hard labor so that other enterprises can make extra cash. No other developed countries have adopted a prison model this extreme.

7. The Cost Of Higher Education

An annual report by the Organization for Economic Cooperation and Development (OECD) shows that, as of 2009, 40 percent of Americans under the age of 34 have higher education degrees. About 40 percent of folks middle-aged and older also have those degrees, which means that the number hasn't changed in decades. Out of the 36 countries the OECD researched, we come in at 12th place for successfully educating our citizens the tertiary level.

After the financial crisis hit in 2008, our country was one of the only ones who cut spending on public education. In addition, our citizens spend way more on private education. The correlation is completely imbalanced compared to other nations; 64 percent of our higher education expenditure are private sources, while, on average, other countries spent 68 percent on public education.

With the cost of college and graduate school outrageously skyrocketing in the past few years, it's no wonder we're up to our necks in student loan debt. Private universities are unaffordable and public universities are getting less monetary support than ever due to the tax cuts. On average, private college costs around $30,000 a year for American students, while Japan charges less than $12,000 and Australia quotes $7,692. England and Wales hold 10 spots in the world's top 100 universities, and their students dish out a measly $5,000 annually for their degree.