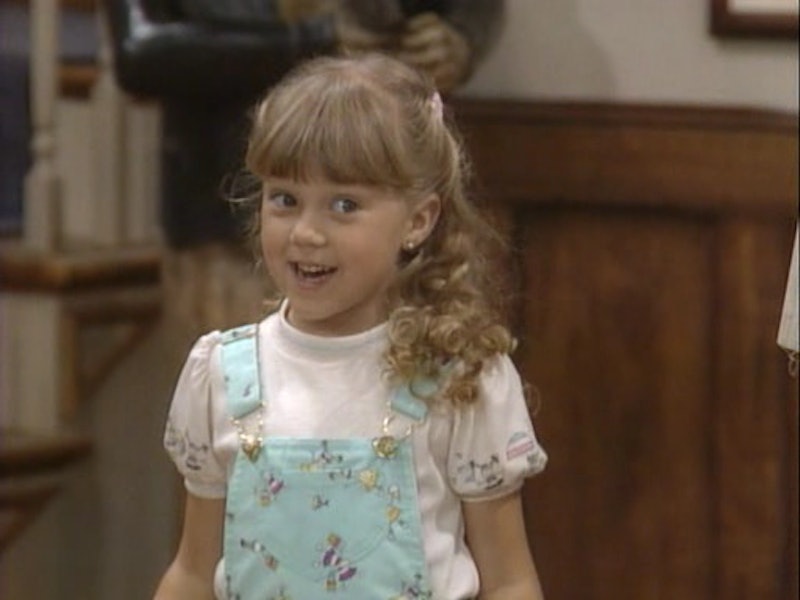 Raise your hand if you're excited for the Full House reboot! Although you can't see me through your computer screen right now, I would be raising both hands and feet in the air, if humanly possible — that's how pumped I am for my favorite childhood show to get a spin-off. While fans will have to wait until 2016 for the Netflix revival, it will definitely be worth it. How can I be so sure? In a recent interview with Entertainment Tonight, Jodie Sweetin revealed which classic Stephanie Tanner catchphrase will reappear on Fuller House, saying,

‘How rude!’ definitely makes a comeback, I can say that at least. Fans will not be disappointed. Stephanie has not lost her catchphrase.

Thank goodness! It actually would have been very rude if they didn't include it on the new show. Really, who would Stephanie Tanner be without her classic catchphrase? Those slogans definitely defined every member of the Tanner family. Speaking of the rest of the cast, Sweetin said, "We’re aware that we are Full House. We don’t take ourselves too seriously. I think fans will get a kick out of that."

Based on all of the above, the series already sounds amazing! But to ensure it's as great as it can possibly be, I have some suggestions. Besides Michelle Tanner's return (Please, Olsen twins! Just do it!), here's a list of all the other things we need to see in Fuller House , because the show just wouldn't be the same without these important aspects.

We already know DJ's ex-boyfriend is part of the show, since actor Scott Weinger has already posted photos of the script. So I'm obviously hoping DJ and Steve get back together, because they were the ultimate '90s relationship goals.

Uncle Jesse wouldn't be Uncle Jesse without his signature saying or his flawless hair. These both need to be part of the show.

Years later, I'm hoping the Smash Club is still up and running. And I hope Jesse and the Rippers perform a reunion tour on that very stage.

I don't care that it's years later and Joey Gladstone probably grew out of his puppet phase. If Mr. Woodchuck isn't there, I'm not watching! (OK, I will still watch...I'll just be very disappointed.)

The Return Of Derek

If you're not going to give us Michelle Tanner, please give us her fantastic friend — Derek! Actor Blake McIver recently made his own music video to Demi Lovato's "Cool for the Summer" (watch it ASAP if you haven't already!), so he's still hamming it up just as much as when he sang "Yankee Doodle Dandy" back in the day.

With all of the factors above, Fuller House will be a hit! Hopefully the TV gods make these dreams a reality. If not, I'll let Stephanie sum up my reaction:

More like this
Police Shove 'Full House' Star Jodie Sweetin At An Abortion Rights Protest
By Radhika Menon
Christina Aguilera Had A Mini "Lady Marmalade" Reunion With Mya At LA Pride
By Jake Viswanath
“The Door Is Always Open” For Another 'Breaking Bad' Spin-Off, Says AMC Boss
By El Hunt
Emma Thompson, Lashana Lynch, & Stephen Graham Lead Netflix’s 'Matilda'
By Sophie McEvoy
Get Even More From Bustle — Sign Up For The Newsletter