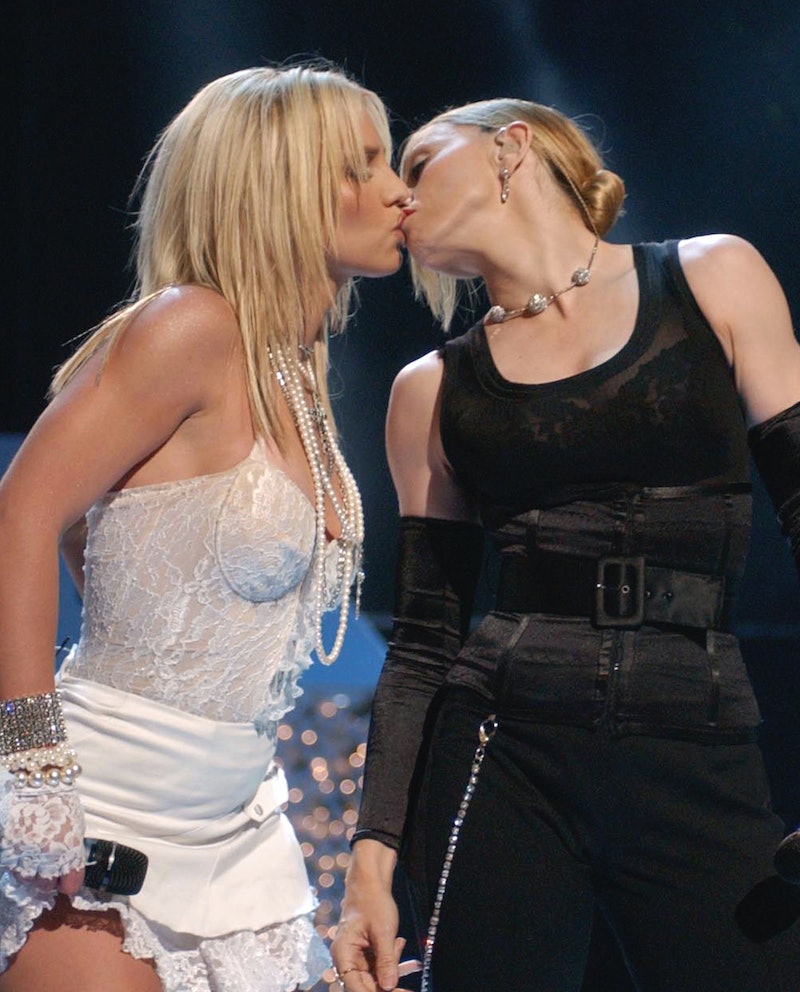 I'm pretty happy living in this particular day and age, but every once in a while, it's hard not to get dewy-eyed over the good ol' days when flared jeans, tiny dogs in gigantic purses, and the Britney versus Xtina feud reigned supreme. I'm speaking, of course, about 2003, the best year ever. Sure, we might just be falling prey to nostalgia for our childhood, which is scientifically shown to happen as you get older, but according to current scientific thought, that's actually good for us. Besides, I'm telling you: There was something undeniably special about the early 2000s.

Was it the all-denim everything? The fledgling reality show genre, which had no idea what a monstrously bloated entity it was destined to become? The iconic status of Queen Britney, Lord of Everything She Surveys, Blessed Be Her Name? Or maybe it was the glitter we liberally sprinkled our bodies with while rocking out to "All the Small Things" in our rooms before we headed out to the mall with our squad. Oh, wait — these were pre-Taylor Swift days, so "squad" wasn't part of the pop culture vernacular yet. My bad.

All of the above are representative of 2000s culture, but I think we can all agree 2003 perfectly encapsulates the feeling of the era. If you don't believe me, here are 16 reasons why it was the best year ever.

1. Buffy the Vampire Slayer was still staking its claim on TV.

BTVS was incredibly fun, but it also featured feminism, patented Joss Whedon snappy dialogue, and an actual lesbian couple. Not bad for a mere TV show.

You'd always say that you would eat the huge chunks of cocoa slowly, but those things were gone within minutes. Well, perhaps hours. The point is, the day they discontinued the chocolate blocks was the day our chocolate addictions got a little harder to feed.

3. Britney blessed the world with "Toxic."

Also known as the greatest cover of all time, amen. Long may the Queen of Pop reign.

4. The Order of the Phoenix came out.

And lo, Sassy Harry Potter was born. What a wonderful time.

5. Fall Out Boy released Take This to Your Grave .

They weren't famous yet, but the album was their first with label Fueled by Ramen, signaling the beginning of a long line of amazingly detailed song titles. Never change, Fall Out Boy. Never change.

Everyone's favorite punk princess rocketed to fame with the release of her debut album, Let Go, in 2002, and by the next year, her scowling, eyeliner-smudged face was all over the place.

7. The O.C. introduced America to a new cast of hot people.

The show continued a storied tradition of the CW's commitment to casting only the hottest of actors, and boy did they uphold it with The O.C. The thought of Seth Cohen still makes my no-longer-preteen heart skip a beat.

8. It was our last year with feminist icon Katherine Hepburn.

She will forever be missed, and not just because she wore pants in a time when such fashion choices were positively scandalous. The star's filmography is full of movies ahead of their time, and each year, Bryn Mawr College gives out an award in her name to other women who effect change in their fields.

9. Ludacris made his acting debut in 2 Fast 2 Furious.

Although the sequel to The Fast and The Furious tragically lacked the original gratuitous shots of a scantily-clad Vin Diesel, at least we got to enjoy Ludacris' surprisingly acceptable acting skills.

10. In fact, it was the beginning of a decade of sequels.

Sequels are groan-worthy now, but at the time, we were all stoked for Return of the King, both Matrix sequels, and Terminator 3. Well, we were excited about the Matrix sequels until we saw the second one, and then we lowered our expectations by 200 percent.

Not since the '50s has slang been so distinctive and fun to use. Later, skater.

The incomprehensible, glamorously spectacular song of a generation. Plus, the video features Eric Roberts!

13. Nokia cell phones were all the rage.

They may not have been able to do much, but their batteries lasted forever. I'm pretty sure my older sister's model is still chugging along in her closet.

14. David Beckham's hair was its glorious self.

What a day. What a lovely day!

15. Finding Nemo swam its way into our hearts.

More than ten years later (!!!!) we're getting a sequel, but the movie still holds up. That's more than we can say about our former cultural obsession with Paris Hilton. Oops.

16. Pirates of the Caribbean gave us Captain Jack Sparrow.

And also a frequently-wet Orlando Bloom and a beautifully-costumed Kiera Knightly. Be still my heart.

More like this
David Schwimmer Doesn't Remember This Classic 'Friends' Episode
By Sam Ramsden
The 'Hocus Pocus' Sequel Finally Has A Release Date & It Makes Total Sense
By Shannon Barbour and Radhika Menon
Hayden Panettiere Will Return For 'Scream 6': "We F*cking Won, Scream Fam"
By Jack Irvin and Jake Viswanath
Love Of Huns' Definitive Guide To A Seminal BRIT Awards Moment
By El Hunt
Get Even More From Bustle — Sign Up For The Newsletter