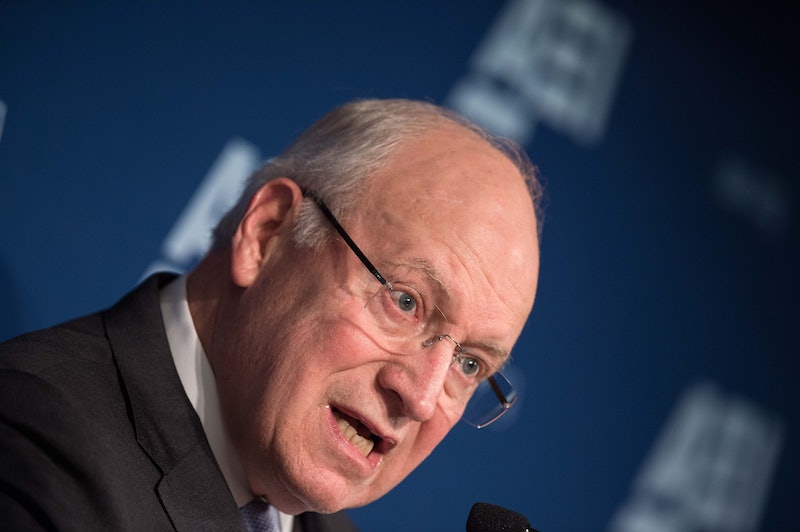 The things we Google speak volumes about the Googler — for instance, I frantically searched the phrase "how to un-burn pasta" last night, which I believe says quite a bit about my culinary expertise. It's always informative (and usually hilarious) to see what we ask the Internet when nobody's looking, which is what led real estate site Estately to compile a list earlier this week of the political topics each state Googles the most. Who knew people still cared about what Dick Cheney is up to?

Using Google Trends, Estately analyzed the most popular political Google searches in each state, from individual candidates to issues like Planned Parenthood. If you have even a passing familiarity with U.S. politics, it won't exactly come as a surprise to hear that the results were somewhat of a mixed bag — in fact, they're exactly like if someone scribbled down a bunch of current political topics, stuck them in an actual bag, and assigned them at random. There are some trends, of course: Apparently, Texans spend quite a bit of time looking up gun control and the Bill of Rights, and "Kim Davis" is Kentucky's most Googled topic.

On the other hand, it should be noted that the report doesn't analyze the reasoning behind each state's Google searches. It's an easy joke to claim that Georgia's obsession with states' rights stems from a crazed right-wing population, but that doesn't account for the pack of raging liberals found in Atlanta. It's a fun list, but let's not go making any larger assumptions about state politics.

OK, now let's get to the good stuff. Here are my 13 favorite topics:

I obviously had to start with this one; I think Alabama residents were as surprised as the rest of the country when the state's same-sex marriage ban was overturned earlier this year.

Planned Parenthood has had a rough time of it lately, but that hasn't stopped California Senator Barbara Boxer from doing her best to defend the organization.

Did you know Delaware is full of old people? Neither did I, until today. The more you know.

In our defense, Obama memes can be pretty funny.

Although the statewide minimum wage is currently $8.25, Chicago recently increased its minimum wage to $10. Huzzah!

None of these are particularly noteworthy on their own, but taken together, they lead me to believe that Indiana might need a little refresher on the basics of government.

Maryland has its priorities straight.

Surprisingly, Minnesota residents search "Black Lives Matter" more often than Missouri, even though Ferguson is located in the other state.

To be honest, I have no idea how he's not on every state's most-searched list.

What gives, Oklahoma? You can't bother to search anything political?

Who knew the Northwest was such a hotbed of anarchy?

More like this
How To Support Gun Control Reform Right Now
By Morgan Brinlee and Carolyn Steber
What Is Barack Obama’s Net Worth? He Makes *Way* More Now As An Ex-President
By Hugh McIntyre
10 Times Boris Johnson Got It Wrong On Trans Rights
By El Hunt and Sam Ramsden
7 Gun Control Advocates To Follow On Twitter
By Madhuri Sathish-Van Atta
Get Even More From Bustle — Sign Up For The Newsletter