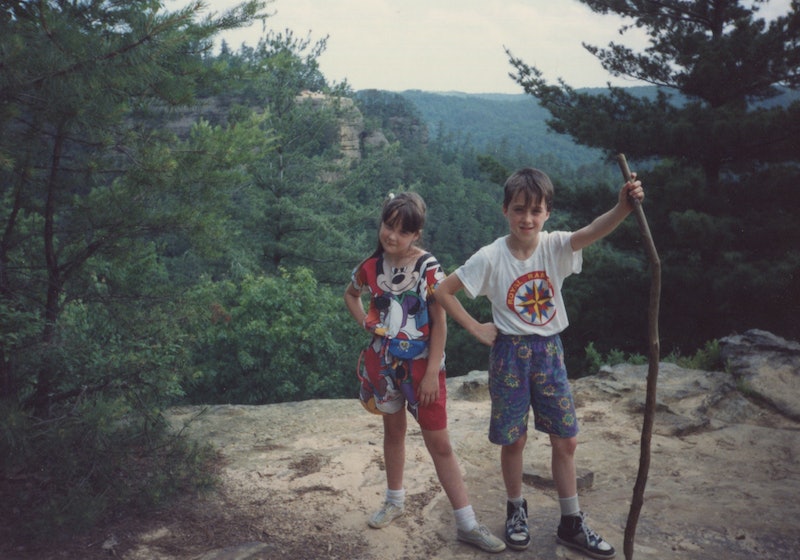 If you're a '90s kid like me, you undoubtedly appreciate what the decade did for you then — from music to fashion and everything in between, you grew up in an era of golden gods like Cindy Crawford and the Spice Girls. But you're still reaping the benefits of coming of age during that particular decade, whether you realize it or not, and one of the most tangible of these fringe benefits is how being a '90s kid made you a better girlfriend or boyfriend. Who knew all those countless hours of tending to your Tamagotchi would prove useful for anything other than driving your mom crazy?

There are lots o' qualities that make someone an epically good romantic partner, and obviously I'm not saying only '90s kids have those qualities. What I am saying, though, is that the perfect storm of awesomeness that was our upbringing prepared us to kick some boot-ay in the love department in some novel ways. How could those of us who grew up with treasures like Topanga Lawrence and Tamagotchis not somehow be inherently more adept at life, I ask you? We were blessed with so many tools to help shape us into rad beings — it's no wonder, really, that we're particularly well-suited for love.

Here are but a few of the things was '90s kids picked up in between episodes of Dawson's Creek that make us total catches:

1. We've Got Patience to Spare

Patience is right up there with communication as one of the key components of a successful relationship, and we '90s kids have it in spades. I mean, how many minutes of our lives did we spend waiting for dial-up Internet to connect? And don't even get me started on the eternity we had to suffer through between our favorite shows each week — Netflix was so not a thing yet.

It wasn't that we didn't adore our Tamagotchis. In fact, we doted on those little digital pets like there was no tomorrow. Only sometimes we got busy and forgot about him, causing him to die a painfully slow, poop-filled death. Now we know better. We're just as nurturing, but more mindful than ever to check in regularly. Rest assured you won't suffer the same fate as Tamagotchi if you're in a relationship with a '90s kid.

It would have been nearly impossible to go through the '90s and not make it out with some killer dance moves on the other side. Exhibits A, B, and C? The Macerena, the Carlton and the Tootsee Roll. Anyone who could master all three of these dances in one decade clearly knows how to work it. I rest my case.

You can't shake a stick on Facebook without hitting some drama stemming from someone misinterpreting some other someone's status update. Lucky for '90s kids, we've been translating digital moods for decades, thanks to AIM. We no longer jump to conclusions based on digital messages — we spent far too many hours of our youth wondering why our crush was always "Busy" when we weren't and stressing over his minimal usage of exclamation points in casual convo ("Is he not happy to talk to me?!").

Real talk: We all wanted to be Topanga Lawrence from Boy Meets World, and not just for her flawless hair. In fact,'90s kids had tons of role models on television that taught us it's OK to be weird — that we should embrace our quirks and feel free to be who we really are. Thanks for that, Cory and Topanga, Clarissa Darling, Daria Morgendorffer, Bart and Lisa Simpson... the list goes on and on. See also: The myriad down-to-earth '90s TV couples that gave us all relationship goals.

6. We're Persistent to a Fault

One cannot be blamed for forgetting to save their video game mid-adventure. Thus, all too often, we spent hours upon hours getting to the final stage in Donkey Kong, Super Mario, or Sonic the Hedgehog on our gaming console of choice, only to fall off a cliff or be stomped to death by Bowser. Still, we never gave up. That kind of commitment is hard to come by, my friends.

7. We Learned Early to Accept Loss

Hey, if we work out, great! If not, that's cool, too. As '90s kids, we are poignantly aware that loss is simply a part of life. What choice did we have but to learn to accept it with grace, when we had to watch the near weekly grizzly massacres on The Animals of Farthing Wood, Mufasa get murdered by his brother (traitor!), and Jenny laid to rest beneath her and Forrest Gump's favorite tree. Truth be told, I'm still not over that last one.

8. We are Mix Tape Masters

We were pioneers of "Netflix and chill" before Netflix and Chill was even a thing. Or, for that matter, before Netflix was even a thing. The point I'm trying to make is '90s kids were creating some hella good musical playlists for our significant others long before doing so on Spotify was an option. We may have rolled old school, but our mixed tapes were the bomb-dot-com (oh yes, I went there.)

Want to make a '90s kids happy? Toss 'em a pack of Gushers.Think it's time to put a ring on it? Make it a Ring Pop (watermelon, naturally — anything less is grounds for annulment). We appreciate the little things in life, particularly when they are in the form of tasty nostalgic treats.

Hey, there was a time when we legitimately thought the world might be coming to an end. Y2K forced us to take stock of our lives (and our pantries) and ride out our impending doom. Happily, we didn't all go down in flames and believing we were on the brink of an apocalypse gave us a zeal for life that hasn't run out yet. Although, come to think of it, our relentlessly upbeat attitudes could also stem from subliminal messages subconsciously encoded in those alarmingly cheerful Lisa Frank notebooks we all had.