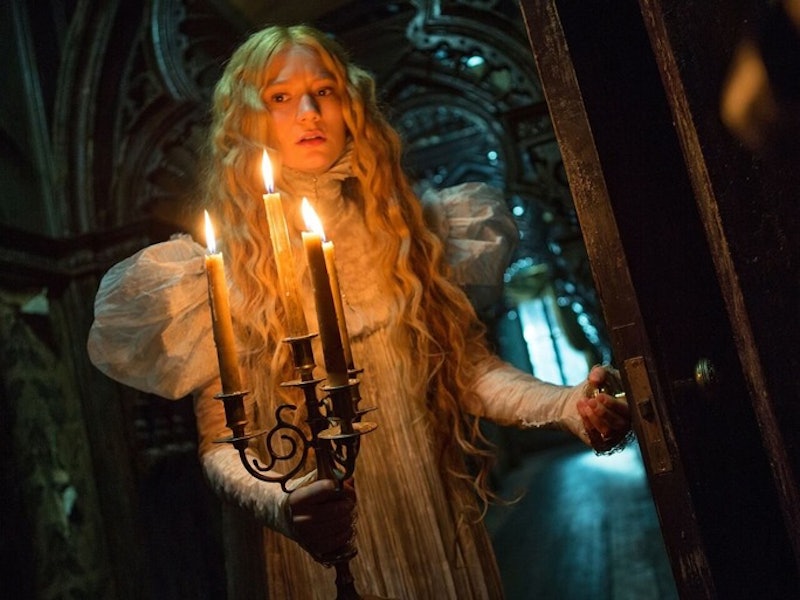 A lot has been said about Crimson Peak, Guillermo del Toro's creepy new Gothic romance that seamlessly blends a ghost thriller with a period romantic drama. Here at Bustle, we've analyzed the possibility of a Crimson Peak sequel, discussed Tom Hiddleston's role as the mysterious seducer Thomas Sharpe at length, and hailed the Crimson Peak sex scene as a rare example of female-driven sex on screen. All of these topics are worth discussing, and can be used to determine one simple fact about the film: Crimson Peak is a feminist movie. And make no mistake, the Crimson Peak ending is a very feminist one.

At the end of Crimson Peak (spoilersahead), Edith (Mia Wasikowska) nearly falls prey to the evil plans of her new husband Thomas (Tom Hiddleston) and his sister Lucille (Jessica Chastain), but manages to save herself. Thomas and Lucille are planning on slowly killing her with poison, waiting until she has officially signed over her family money to Thomas to commit the murder. Yet Thomas begins to have second thoughts, and, in a spooky turn of events, is killed by his own sister/lover for choosing to help Edith survive. After murdering her brother, Lucille swears that she will not stop until she kills Edith, too, and Edith is left with no choice but to kill Lucille. In doing this, Edith saves herself and her admirer, Alan, who traveled from New York to "rescue" her from the Sharpes. While del Toro's expertly executed climax is much more cinematic and tense than as described here, the basics hold true: Edith lives after killing Lucille and walks away from Allerdale Hall on her own two feet — one of which is likely broken.

The ending of Crimson Peak might feel somewhat predictable for some. Good (Edith) defeats Bad (Thomas and Lucille), and walks away from her tormentors on the arm of a nice man who has loved her all along. The visual of Edith and Alan stumbling across a vast clearing of red snow to safety closes the film, and one half expects a nice ending scene to follow. You know the type — "Five months later," in which Edith and Alan are happily married, working together on her ghost stories in America. The fact that del Toro refused to give his characters, particularly Edith, such a traditional happy ending is commendable. Moreover, it is completely in line with Edith being an independent and capable woman.

In Crimson Peak, Edith is in charge of her own destiny from the beginning. Desperate to be taken seriously as an author, she refuses to add a romantic storyline to her manuscript, and instead plots to type up her story so that an editor might not know it was written by a woman. Yes, she is somewhat manipulated into marriage, but she also controls the pace of her physical relationship with her husband in a way rarely seen on-screen. And, in the end, she is the one who saves herself with Alan and Thomas' help, not the other way around.

It should be noted that del Toro also takes care to ensure that Edith's financial security past the ending of the film is in tact. In a deliberate move from the filmmaker, it is clearly established that, after the Sharpes die, Edith is completely in control of the money left to her upon her father's death. The papers that would transfer the funds from Edith to Thomas are specifically shown burning in a furnace before the final battle between Lucille and Edith even begins. It's clear, then, that Edith does not end up destitute and alone. In fact, at the end of the film Edith is completely independent and does not need anybody else (read: a man) to take care of her.

The fact that Edith and Alan do not end up together — regardless of what may or may not be interpreted by an audience — is important, as it adds to the fact that Edith's guiding want or desire is not to find a husband or love. Instead, the film ends as it begins, with a voiceover from Edith talking about ghosts, suggesting that Edith has continued to chase her dream of being an author of ghost stories. The end of Crimson Peak isn't happy because Edith is with Alan — it's happy because she's still herself.

More like this
Letitia Wright's Aisha Encourages A Vital Conversation Around Immigration
By Maxine Harrison
Idris Elba & Tom Hollander Lead This Year’s Must-Watch Christmas Flick
By Maxine Harrison
The 'Lady Chatterley's Lover' Book Leaves Us With A Troubling Question
By Catharina Cheung
The 'Firefly Lane' Book Ending Teases Way More Tears To Come In 2023
By K.W. Colyard
Get Even More From Bustle — Sign Up For The Newsletter