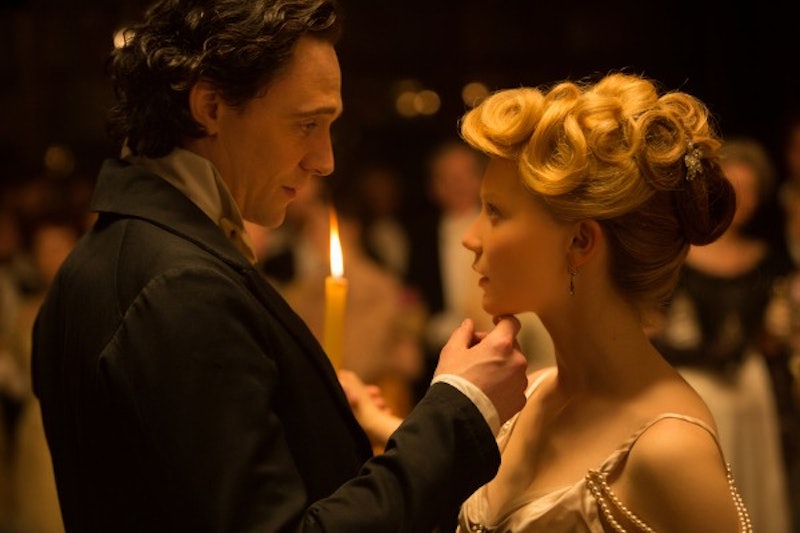 In case you haven't heard, the new movie Crimson Peak contains a super hot sex scene between stars Tom Hiddleston and Mia Wasikowska. As any Hiddlestoner can tell you, the scene features nudity from him — his bare butt, to be more specific. But what they won't tell you is that the nudity isn't the best part. No, what makes the Crimson Peak sex scene so exciting is that it's part of a new wave of sex scenes in movies — ones initiated by, led by, and controlled by women.

It's not that women have previously been relegated to being sexless creatures on screen. But as anybody who's seen a PG-13 movie can tell you, females — especially young women — are often depicted as little more than objects in film sex. In these run-of-the-mill scenarios, there frequently exists just two types of women: the "slut", who corrupts her male counterpart with her over-sexualized body and "experienced" ways, and the virgin who "gives" the man her virginity and needs him to show her the way to sexual pleasure.

Even when it's not this extreme, a woman's body is more often than not seen as a vehicle to expand a male character. The bad boy falls in love after deflowering the virgin. The male geek leaves for college, proud to finally have gotten laid. And while Crimson Peak does follow one of these tropes, as (spoiler!) Hiddleston's Thomas Sharpe falls in love with Wasikowska's virginal Edith, that development is completely secondary to Edith's growth as a woman. The movie flips the script on traditional Hollywood sex scenes by making it primarily in the service of the woman.

In the Crimson Peak sex scene, Edith's pleasure takes center stage. A virgin, she initiates the sex while she and her new husband spend a night at a local inn after being snowed in. Given the fact that Thomas and Edith have yet to consummate their marriage, it's obvious that her decision to have sex with him was one she thought about. This is significant, as it shows that a woman's decision to lose her virginity can be a choice made willingly and soundly, without taking over her entire life. Losing your virginity doesn't have to be an orchestrated event or out of your control — it can be whatever you want it to be.

The fact that Edith runs the show is most evident in the film's unorthodox use of nudity. Hiddleston's butt is shown, while Edith remains covered by an almost comical amount of dress (fitting with the time period, of course). The fact that the male character is the one to get naked shows him in a more vulnerable state, and reinforces the idea that it is Edith's own agency that drives the scene, not his. Speaking to E! News, Hiddleston said of the nudity,

"It's so often in movies that women are more naked than men and I think that's unfair. And, we wanted to sort of redress the balance. And it was really important for us that Edith was calling the shots, that she is the strongest character, she's a strong woman and she's going to dictate how that goes down."

It would be easy to say that the Crimson Peak sex scene isn't as groundbreaking as it seems. After all, it's about the virgin sleeping with the bad boy, a man who has seduced her into marriage and led her to a place that's literally trying to kill her. One could argue that Thomas represents sexual desire — he looks good, sure, but behind that smoldering gaze is something dangerous. However, in Crimson Peak, having sex with Thomas doesn't condemn Edith to death. She isn't punished for performing the act (or worse, enjoying it). In fact, having sex with Thomas is what saves her (or rather, the fact that Thomas has fallen in love with her does). Crimson Peak is just one of the many films celebrating female sexuality this year. Insurgent, Pitch Perfect 2, Trainwreck, and, arguably, Fifty Shades of Grey all featured sexual scenes or situations that put the woman in a position of power and in control of their own pleasure. Of course, "strong" female characters aren't enough. Though the rise of smart, independent women on-screen is significant, what matters almost as much when it comes to sex scenes is how they are filmed. That is what makes Crimson Peak truly stand out: the fact that the scene in question is filmed to showcase a woman's pleasure, not a man's. Moreover, the male nudity in the film shows a purposeful effort not to objectify the female character. The sex scene in Crimson Peak is thoroughly about Edith's character — not just an excuse to show her breasts. With this film, the movement to decriminalize female sexuality on-screen is officially here. Let's hope it's just the beginning.

More like this
Daryl McCormack On His Unusual First Audition With Emma Thompson
By Olivia-Anne Cleary
The 13 Sexiest Movies On HBO To Stream Now
By Alyssa Lapid and Lia Beck
Alicia Silverstone Has Recreated An Iconic 'Clueless' Scene
By Frances Stewart
Chris Hemsworth Joked That Baring His Butt In ‘Thor: Love And Thunder’ Was A “Dream”
By Brad Witter
Get Even More From Bustle — Sign Up For The Newsletter