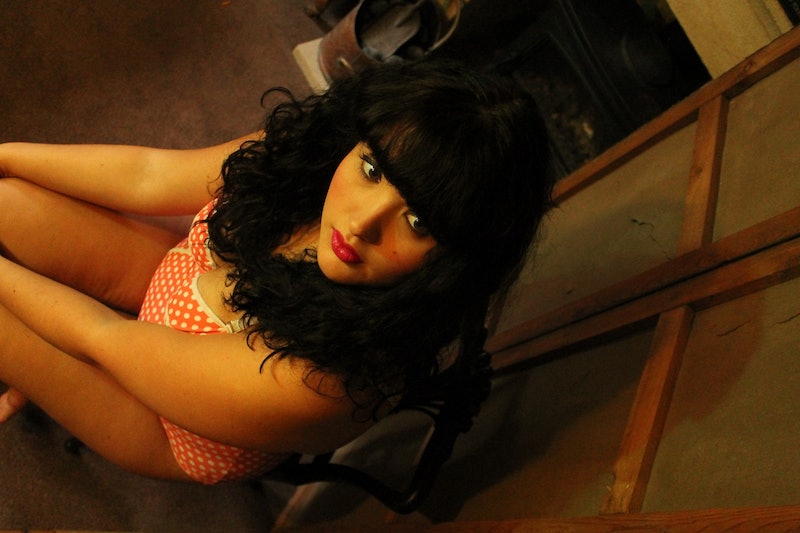 In her essay on The Expose Project, activist Jes M. Baker of The Militant Baker began with a question, "When was the last time you opened up your browser and saw a beautiful image of a body shape that looked just like yours?" Accompanying 98 photos of un-retouched bodies of all sizes, she later wrote, "So much of the female body that we see is pushed up. Pinned down. Sucked in, tucked in, and airbrushed. Its only presentable state is when it's altered, and so when we look at ourselves in the mirror (naked, untucked, and vulnerable) we say, 'My body must be wrong.'"

This is where the power of nudity in the body pos community lies: In its ability to relate, to inspire, and to incite change. Here are nine reasons why doing a lingerie shoot can sometimes be a means to empowerment.

1. It Provides People With Images Of Bodies That Look Like Theirs

This is essentially what Baker was discussing in her blog post. Partaking in a lingerie shoot and sharing those images publicly — be it through social media or your own personal blog or even just with your friends and acquaintances — means you're adding just a little dose of representation to that person's day.

It can be exhausting (not to mention quite inducing of self deprecation) to flick through the channels on the TV, the pages of a magazine, or the shows on your Netflix subscription, and not see a single relatable body. In a culture where 80 percent of Fashion Week runway models are still white, slender women and award shows still focus on celebrating white, slender actors, you can begin to feel alienated if you aren't a white, slender person. But if you then come across a world of social media filled with images of humans who do look like you — and they're being fearless and unapologetic in their underwear — well, maybe you can feel just a little bit less alone.

2. You Get A Chance To See Your Body From Different Angles

I'm willing to bet that most of us see our bodies in two different ways: The "looking down" angle when we're just going about our lives on a day to day basis, and the straight-on mirror angle. But there's a lot more to your body than what you see when you're sitting at your desk or sweeping past the mirror after taking a ridiculously fast shower in order to catch a morning train.

When you do a lingerie shoot, you often end up with images that reflect the angles you're not quite as familiar with. Maybe you'll become reacquainted with your rump and back boobs. Maybe you'll remember you have a really cute mole on the side of your torso. Maybe you'll see your wobbly bits from new heights. Maybe you'll discover that you have more of a butt than you ever thought.

Whatever the outcome — and whatever you do or don't notice about your body — you'll have had the chance to see yourself in a way that others might often be privy to, but that you might never have paused to consider the beauty in.

3. And You Get A Chance To Spend Time With Your Almost-Naked Body

Nudity can be a pretty beautiful thing, hence why centuries or decades later, we're still fascinated by the paintings of Peter Paul Rubens or Salvador Dalí's transition into nude photography and film. In real life, however, there aren't many opportunities to see yourself reflected through someone else's lens. Nor are there that many opportunities to spend time with your own naked or semi-naked body outside of a sexual situation.

I'm a big proponent of spending time with your unclothed bod. Oftentimes, clothing in and of itself can serve as a kind of body positive barrier. If your body is plus size, for example, you might feel like the clothes designed for you are often rooted in the desire to hide your rolls. If you're a non-binary person, you might feel like the very categories used to sell clothing (men's versus women's) are alienating. But if you're in lingerie of your choosing and in a space in which you feel comfortable, you might just feel like you're presenting yourself in exactly the way you want in that moment.

4. If Your Body Deviates From The "Aspirational Beauty" Trope, It Is A Radical Action

There's a lot of debate as to whether posing in bikinis or underwear when you're fat or an otherwise not-widely-accepted body type is a "brave" action or not. I'd like to believe that someday it won't be. I'd like to believe that someday a woman wearing clothes that don't hide her stretch marks or post-baby body or visible belly outline will just be normal — because it's normal for bodies to change as we grow older, and it's normal for bodies to come in different sizes.

At the moment, though, we're not being presented with normal. We're being presented with aspirational. The media thrives off of articles and television shows and beauty products that are meant to help you change. But isn't that a terrifying concept? Change your weight, change your skin color, and change your clothes until you're just one more drone in a homogenized bubble of bodies that all look like you. Yay?

Posing in a lingerie shoot is a reminder that you don't have to change. I don't believe we should spend every day beating ourselves up for not being at our personal "ideal," nor should we let society dictate what our ideal should be.

5. We Need To De-Stigmatize Female Nudity

It shouldn't come as a shock to anyone to hear that the female body is attached to quite a bit of stigma. As Bustle's own Kylie Cheung wrote when analyzing the Free The Nipple movement:

"What would happen if society took all the energy it wastes being outraged by the female nipple and focused it on a discussion about the systemic misogyny this outrage is rooted in? Ultimately, this is the answer Free The Nipple protests are searching for, and you can't say that isn't a productive way to spend their time."

From nipples to periods to giving birth, people are grossed out and troubled by the female body and its natural state constantly. I can't tell you how many times I've been in conversation with a male friend or acquaintance about sexuality or anatomy, only for them to change the topic with a muffled "ew" and a, "Why are women's bodies so nasty?" remark.

Here's the thing: A lot of things are bodies do are gross. But that doesn't mean they're bad. Posing in a lingerie shoot is a way of remembering that despite all those weirdnesses, there's nothing to be ashamed about.

6. Nudity Doesn't Have To Be Oppressive Or Sexist

I was looking through the comments on a recent video I was in (seriously, never read the comments), and encountered one by a dude who wrote, "Wahh! I'm so oppressed! So here's a photo of me in my underwear!" The thing is, there are times when nudity is oppressive, and there are times when it isn't. Sometimes nudity is used under the "sex sells" umbrella. Sometimes it's used to exploit women. Sometimes it's used for incredibly non body positive reasons. But that doesn't mean your nudity is inherently sexist or oppressive.

By choosing to be in a lingerie shoot, you're doing a simple act to reclaim your femininity and your body overall. Sure, you might pose a little sexy because you feel like doing so. Or you might feel detached from sex entirely. No matter how or why you're posing, though, you might just end up feeling pretty liberated for utilizing nudity in a way of your choosing that isn't tied to selling things or turning people on. And that's a pretty body positive thing to do.

Ultimately, women should be allowed to feel sexy without being branded as promoting sexist ideals, because then we've just let a lot of those sexist ideals about women having to always look their best for all the men in the world steal something from us.

7. The Importance Of Showing That You Can Have A "Different" Body & Still Be Successful

In her essay on giving up weed for a month, Bustle's own Rachel Krantz wrote, "It is important to me that I be 'out' as a weed smoker and a successful woman on a platform like Bustle, because I think it is ridiculous that this drug is still stigmatized when it is clearly so much less dangerous than drinking." So how does this relate to lingerie?

8. It's A Reminder That Sexy Is For All Sizes

Whether you participate in a lingerie shoot that is meant to have a sexy tone to it or one that is just for the fun of it, that shoot is likely going to help at least one person who sees it realize that the word "sexy" isn't about body type. If more women of more sizes had the experience of shooting in lingerie and then sharing those photos, then more women of more sizes might think, "Hey, if I think she looks sexy and she has a similar body type to me, then maybe I'm sexy too."

9. It's An Unexpected Form Of Self Care

A lot of people look at images like all of the above, and tell me how confident and happy I look. In her open letter to "the person running [her] Instagram," Bustle's Olivia Muenter asked her Instagram self, "So maybe you can tell me, because you seem to have the answers — what's it like to not have anxiety? To not lie awake for four hours before you finally fall asleep. To not be so painfully, physically restless — so full of worry that you feel like your mind won't stop racing." She taps into something most of us living in this digital age who use social media frequently have probably experienced: The divide between the happy photo we're posting on Instagram and the actual feelings and experiences we're having IRL.

As someone who experiences bouts of anxiety and depression (neither of which is rooted in this ridiculous belief that all fat women must inherently be miserable deep down) more regularly than I'd like to, it's important for me to find little things that can temporarily relieve those feelings. In the three years that I've been blogging and writing publicly, photography — and especially lingerie shoots — has served as one of these "little things."

If I look happy in these photos, it's because I was in the moment they were taken. Maybe I spent hours the night before crying in my drained bathtub or maybe I listened to Adele on loop one too many times on the subway that morning. But in the moment — hell, yeah. I was pretty happy.

There's something about shooting in lingerie that's vulnerable and raw. Not only can you see yourself from new perspectives, but sometimes you can see your life — even if only for the couple of minutes or hours you're in front of a camera — from a new perspective, too. Shooting in lingerie is about exploring new angles, new ideas, and new ways of thinking about your body. In that moment, a lot of your cares and concerns might just float away — which means you have a clear mind with which to consider how to preserve the feeling once the lens cap is back on.

More like this
Most Comfortable Underwear For Big Butts
By Audrey Williams
Strictly’s Rose Ayling-Ellis Has Introduced The First Barbie With Hearing Aids
By Darshita Goyal
42 Black Owned Fashion & Beauty Brands To Support Today & Always
By Mekita Rivas, Shea Simmons, Kui Mwai and Dominique Norman
11 Graduation Guest Outfit Ideas To Wear To Someone Else’s Ceremony
By Phoebe Avison and Claire Fox
Get Even More From Bustle — Sign Up For The Newsletter