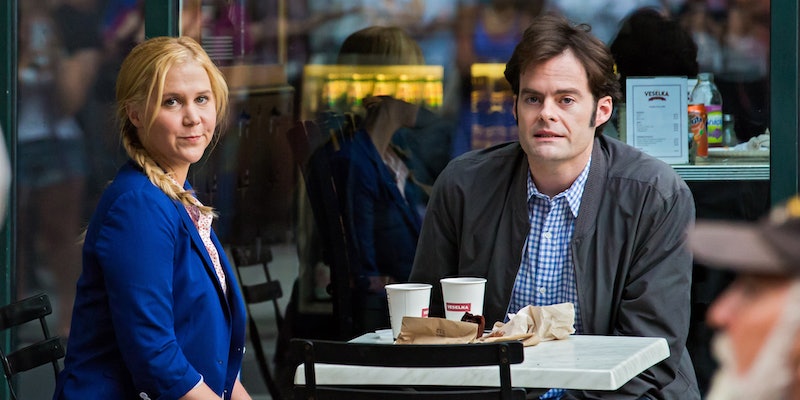 November is for eating and being lazy, and nothing complements those two activities better than streaming movies into your home. Whether you subscribe to Netflix, Hulu, Amazon Prime, or HBO NOW — or if you're like me, all of the above — you're sure to find something interesting arriving to your favorite service next month. And for those of you who want to rent the hottest new releases as soon as they're available on iTunes, don't worry, I've got you covered, too. I've combed through all the major streaming services to discover the 11 best movies to stream in November, so you can spend more time being lazy and eating and less time searching for what to watch. You're welcome.

HBO Now probably has the strongest movie offerings this month, with a healthy mix of new releases and classics. Netflix, on the other hand, seems to be focusing more on original content these days, debuting several highly-anticipated new series next month like Marvel's Jessica Jones and Aziz Ansari's new sitcom Master of None , so their new movie selection is slightly lacking. And then there's Amazon Prime and Hulu; it wasn't long ago that Hulu was a graveyard for movies, but after snagging the massive Epix library from Netflix, they've become a top destination for huge movies like The Hunger Games . But enough about the services themselves — here's what you should be watching this month.

Considered one of the best and most inventive science fiction movies of this century, this 2015 film about an artificially intelligent android stars Alicia Vikander and Oscar Isaac, whose performances show why they're now two of the hottest actors in Hollywood.

The Craft is about four misfit high school girls who become powerful witches, and it's so '90s it almost plays like a supernatural version of Clueless (albeit with more death and demonic worship).

Where to watch: Netflix starting Nov. 12.

This story of a young Earth girl who teams up with an ostracized member of an invading alien race was the only 2015 offering from DreamWorks Animation, and though it wasn't as critically acclaimed as some of their other offerings it's still super cute. Just look at that cat!

Where to watch: Netflix starting Nov. 25.

Where to watch: All available on Hulu starting Nov. 1.

Thanksgiving undoubtedly gets the short end of the stick when it comes to holiday programming, as there are way more Christmas movies and Halloween movies to watch, but Garfield's encounter with Turkey Day is one of those underrated side dishes.

Where to watch: Hulu starting Nov. 5.

It's quality is debatable, but it was a massive hit and a cultural phenomenon, so if you still haven't seen it here's your chance. Plus, this is the unrated version, so take that into consideration.

Colin Firth running a proper, but very kickass, British secret spy agency is even more fun than it sounds. There's nothing else quite like it.

There was a brief moment in time where it seemed like Beyoncé was going to become a major movie star. Relive those days with this 2006 film inspired by the beginning of The Supremes, which features Queen Bey and Jennifer Hudson singing on stage together. The film earned a Golden Globe for Best Musical or Comedy, and Hudson won an Oscar for Best Supporting Actress.

This 1968 film starring the legendary Charlton Heston is one of the most classic science fiction films of all-time, and its reboots are still drawing big money at the box office today. Relive the insane ending next month, along with two of its '70s sequels: Beneath the Planet of the Apes and Battle For the Planet of the Apes.

Amy Schumer's first comedy was also the best comedy of 2015, and if you haven't seen it yet you definitely shouldn't wait another year for it to hit Netflix or HBO Now. Rent it ASAP.

Where to watch: Available to rent on iTunes and other outlets starting Nov. 10.

There, that should be enough content to last you until December, when we'll get to do this all over again! Until then, enjoy your turkey and your couch.