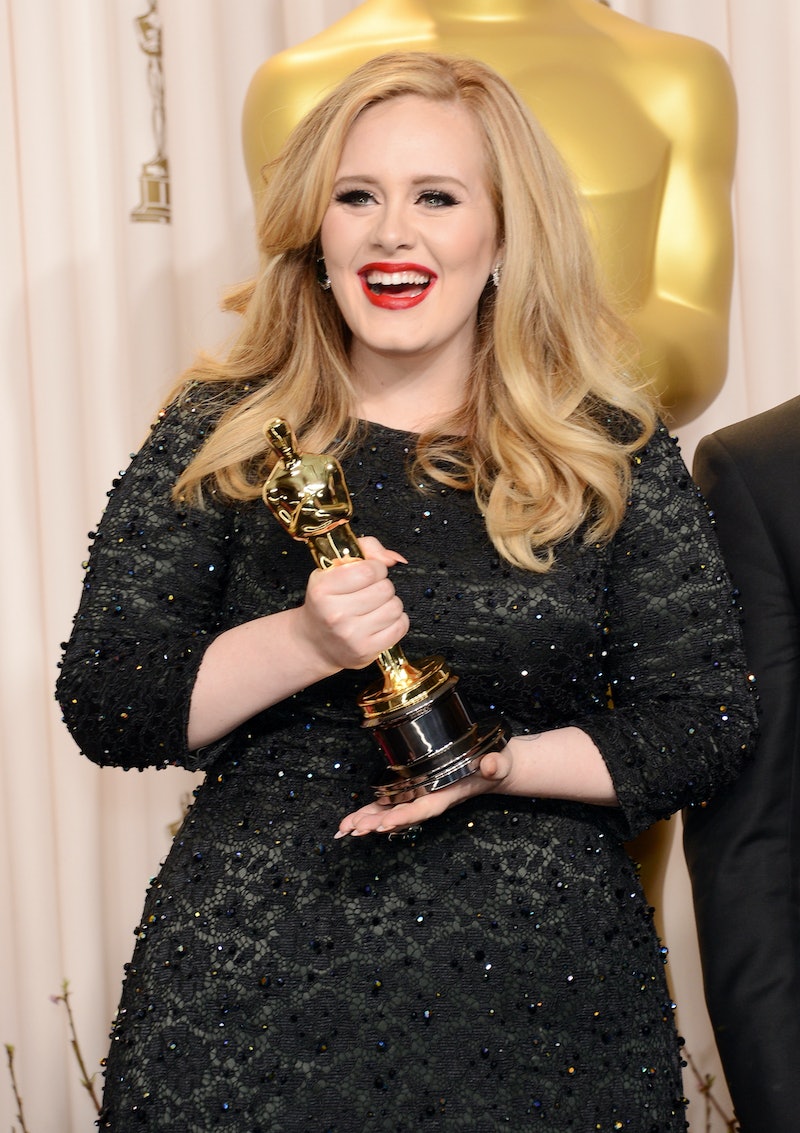 After a seemingly endless hiatus, Adele returned from "the other side" and gave us the best song since "Rolling in the Deep." If you haven't been playing "Hello" on repeat the past few weeks, I'd have to question your taste in music. The emotional ballad resonates on so many levels! Since she's clearly making a major comeback, Adele is on the cover of Rolling Stone — looking amazing, make up-free and all. In the magazine, Adele talks about feminism, and once again it's like she's speaking directly to my soul.

According to Rolling Stone writer Brian Hiatt's commentary, "Adele has been so busy the past few years that she's only faintly aware of the newfound prominence of feminism in the pop-cultural discourse." She told Hiatt,

If there's a movement, that's great. Who's doing it? Will you ask me if I'm a feminist? I don't think many men in interviews get asked if they're feminist.

Part of me can't believe that Adele is unaware of someone as huge as Beyoncé backing the feminist movement, but let's cut Adele some slack. After all, she has been out of the spotlight for quite some time. Maybe she missed Taylor Swift's declaration that "feminism is probably the most important movement you can embrace" or Jennifer Lawrence's inspiring essay about the wage gap.

Here's what happened next, according to the Rolling Stone article:

I don't ask the question, but she wants to answer anyway. "I'm a feminist," she says, sipping wine. "I believe that everyone should be treated the same, including race and sexuality."

Everything about this statement is perfect — wine-sipping included. (Add that to the list of reasons Adele is idol-worthy!) It's great that she admits that she is a feminist and believes that gender, race, and sexuality shouldn't stand in the way of people being treated equally. Plus, she also highlighted the double standard that men aren't often asked this question. An excellent point, although thankfully there are some really awesome men who are proud feminists and don't need to be prompted to talk about the topic. (Looking at you, Matt McGorry!)

While on the subject of inequality, Adele talked about not being taken seriously in business meetings where she was surrounded by men. They'd give her an attitude of "what do you know?" Her response? "It's like, 'Well, I'm the f*cking artist' ... 'So I f*cking know everything, actually! Like, don't f*cking talk down to me!' " Preach! Adele really does know how to stand her ground.

Although some people argue it's an unnecessary question — to ask celebrities whether they're feminists — it really can spark positive discussion about the movement, which honestly could use all the support it can get. Plus, it helps change negative stereotypes for people who may be misinformed about the meaning. As Zendaya recently said, "A feminist is a person who believes in the power of women just as much as they believe in the power of anyone else."

Cheers to Adele and all the other celebs who believe in the power of women! Can we please get together, sip wine, and talk about the patriarchy ASAP?