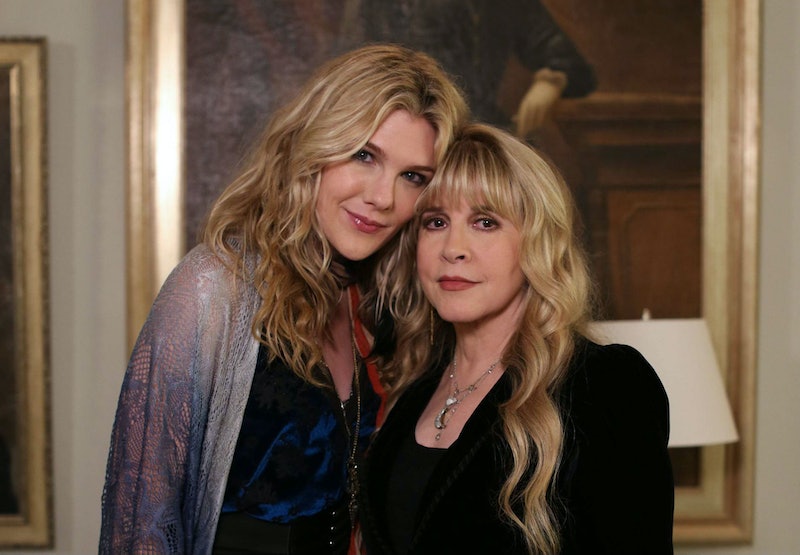 Ryan Murphy is a man of many interests. His line of TV series is all over the map, from the (now defunct) wacky little family sitcom The New Normal, to the racy Nip/Tuck, creepy American Horror Story , and of course (the reason you know his name) Glee . And since Glee exploded like a caboodle of musical theater-grade makeup, it's been the poster child for messy and outlandish, often nonsensical plot lines. Unfortunately, the Glee syndrome has crept into other Murphy projects, most notably this week's episode of AHS: Coven with guest star Stevie Nicks.

Once again, Murphy worked his extensive network of musical best buds to get the legendary Nicks to swing by AHS and not only perform, but embrace the silly rumors about her being a witch that were once so upsetting to her. Naturally, squeezing Nicks into AHS: Coven's already overstuffed plot was no easy task, but Murphy made it happen, resulting in his signature awkward musical encounter: Nicks playing on the piano and singing "Rhiannon" while Emma Roberts' Madison throws a fit over Misty being considered the next Supreme. It was downright Glee-ful. And while the lack of ease with which Queen Stevie was slotted into the episode was glaring, it was the sort of annoyance whose reverberations were slight.

As someone who's felt the effects of a bad Glee cameo — the most traumatizing might be when Ricky Martin points out that Will, the Spanish teacher, doesn't speak any actual Spanish — it was strange to me that such a Murphian cameo didn't render me so incensed that I was distracted from the rest of the episode (and various episodes of television afterward). But then it became obvious: AHS is an absolutely insane, fast-moving, jerky, supernatural ride and it's meant to throw you off-kilter. There's not time to dwell on one big misstep — even if it is repeated in the title of the episode.

But why doesn't that work on Glee, the series whose bread and butter is swift, nonsensical plot changes and unbelievable twists? It's simple, really. Glee's main conceit is that the world can revolve around these twenty-some-odd kids who are in the glee club, or were at one time in the glee club — it's already used up about 75 percent of its "fuck realism" points right there, and that's before we get into the part where Adam Lambert joins Rachel and Kurt's band or Sarah Jessica Parker hired high school grad Kurt to actually work at Vogue.com based off of his Tumblr page of awesome outfits.

Glee is a show about high school (and a little of what happens, in a dream world, after high school), so when it goes off the charts with cameos it becomes a little hard to continue to suspend one's disbelief. And sure, Glee guest stars rarely play themselves, they're written and presented as such a spectacle that it's almost as if Murphy is off-screen yelling, "And now, ladies and gentleman, please put your hands together for Jeff Goldblum as Rachel's faaaatheeer!" The constant celebrity presence and over-stretching plots in order squeeze them in is unrealistic in a setting that attempts to be filled with real messages about youth and acceptance. Glee swaps back and forth between wanting to be taken seriously and wanting to be in on the big joke, but the premise makes it hard to keep that up without causing the audience to lose its collective mind.

American Horror Story, on the other hand, exists solely to make people feel crazy. While some folks may claim they watch for the incredible acting of Jessica Lange (Fiona) or the historical elements, deep down, we all know, AHS is an excuse to watch an hour of WTF television every week. So, when Nicks stops by, you know, because she just happens to be buddies with Fiona and apparently wants to take up residence as the coven's own personal entertainer, it's easier to move on because immediately after that, we find Angela Bassett stealing a baby, Nan making Patti LuPone drink bleach, Madison locking Misty in a coffin, and Fiona murdering Nan in a bathtub. There's no time to really dwell on the Nicks cameo, nor is there any need to: that insane side plot is right at home in a world where vaginas can kill you, Minotaurs are real, and where no one bats an when people burned alive regenerate.

Glee may be insane, but it's got nothing on the pure, unadulterated crazy of AHS, which is why AHS will continue to be that crazy show we love, and Glee will be America's favorite hate-watch until its final days.