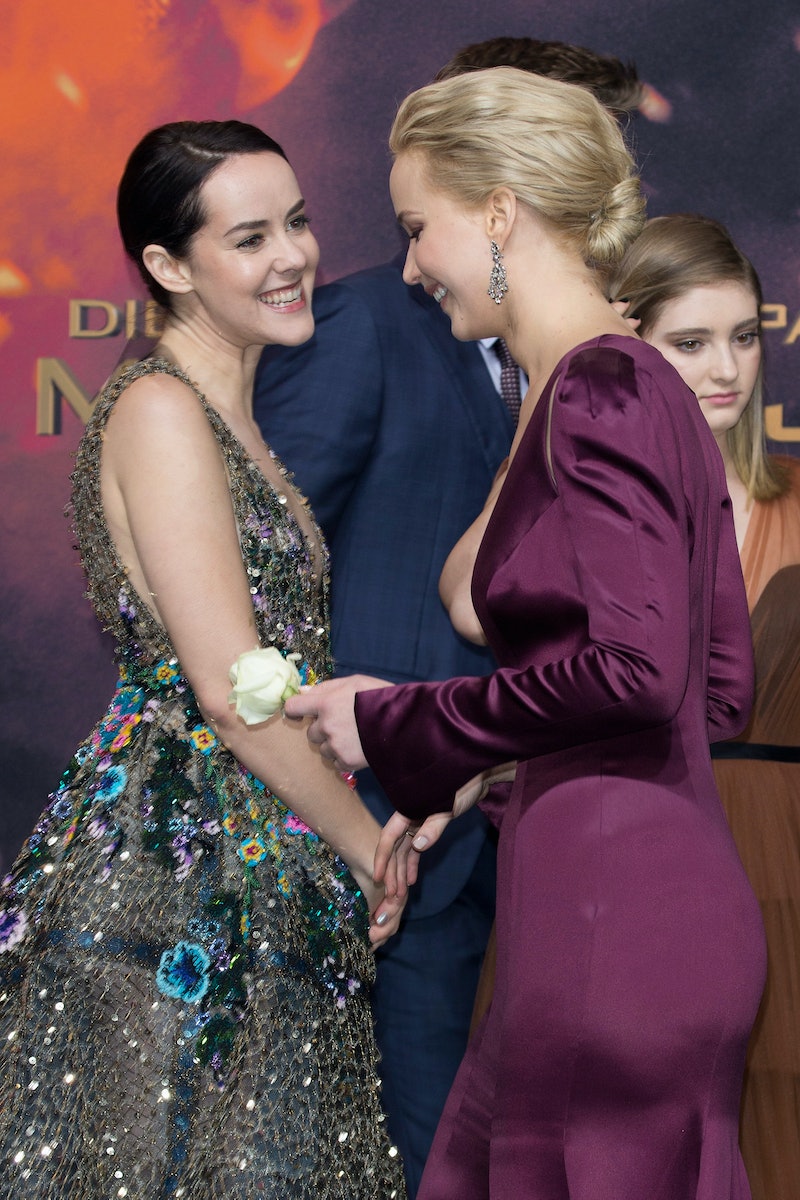 Jennifer Lawrence isn't the only "Jen" in the Hunger Games cast. Actress Jena Malone has played the fiery Tribute Johanna Mason in every film since the her character's introduction in Catching Fire, and the 30-year-old says it has been a wild ride acting alongside her famous cast mates. "We all bonded pretty intensely on Catching Fire," Malone tells Bustle of working with J.Law and the rest. "And then all the other films that we shot — Mockingjay, Part 1 and Part 2 — were back to back, so it was more kind of a reunion."

It's weird to picture such easy friendships between the stars of The Hunger Games, given that Catching Fire ended with Johanna and Peeta's abduction by the Capitol after sabotaging the Quarter Quell in order to save Katniss. But in real life, Malone and cast members like Lawrence and Josh Hutcherson became so close on the set of the second film that they were excited for the chance to collaborate again with their next two movies, she says. Malone adds that Mockingjay, Part 2 (out Nov. 20) in particular provided she and Lawrence the chance to get close, because it was the first time that they had numerous one-on-one scenes.

It was also the first time that their characters really became allies, too. Johanna and Katniss got off to a rocky start in Catching Fire, after meeting in an elevator, where Johanna intimidated Katniss with a condescending attitude before stripping down and walking out nude. But the characters finally started to form a relationship after Johanna's sacrifice for — and then subsequent rescue by — Katniss. Malone and Lawrence never had issues with each other the way their characters once did, but Malone acknowledges that their friendship has developed and changed over the course of filming.

"I think the difference that Mockingjay, Part 2 kind of held for both Jen and I was that there were no boys around," she says. "It was just a lot of the two of us together. It was so rare to not have Peeta or Finnick or anyone around, so for us it was kind of like 'well, what do we do?'"

The two Jens quickly got used to their new girls-only environment, though. Says Malone, "If anything, it kind of allowed us to be a little bit more intimate in the scenes, and to play around more.” The actresses' comfortable dynamic is definitely evident in the clips from Part 2 that have been released so far, and personally, I'm really looking forward to seeing how their real-life friendship allows them to play off each each other in the new film.

The only downside is that fans won't get to see Lawrence and Malone work together on another Hunger Games film since Mockingjay, Part 2 is the end of the series — unless that prequel Hutcherson nearly slipped up about actually happens. Here's hoping it does, and that one more collaboration between the two actresses is still in the cards.