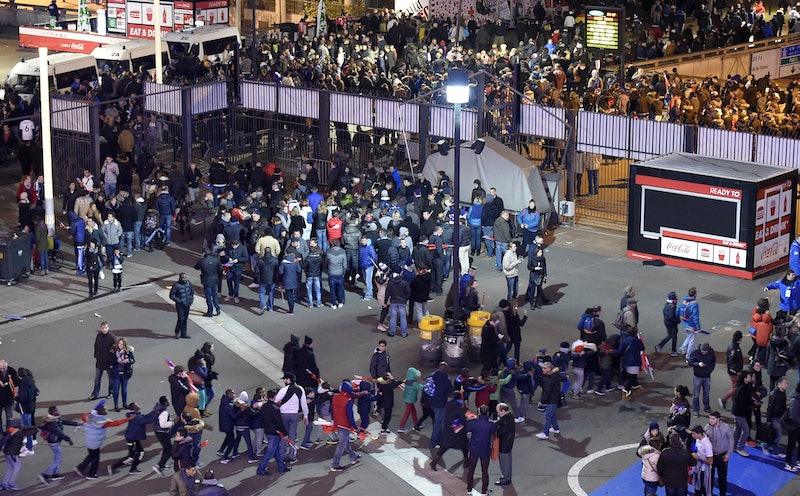 The attacks may have taken place thousands of miles away, but there are still ways to help the victims of the Paris attacks, their families, and all residents of the city whose lives have been shaken by Friday's tragic events. As more details have been released, the situation has only become more dire, with the initial report of a shooting in the restaurant Cambodge being quickly followed by reports of three explosions at Paris' Stade de France and hostages being held at the Bataclan Arts Center.

Earlier: With so many horrific attacks, aid will be greatly needed by many, and there are a few different ways to help. While more ways to specifically help those affected by the Paris attacks will likely arise, for now, there are many international aid organizations you can donate to that should be offering assistance there. But first and foremost, if you are in Paris, you can offer shelter to anyone in need of a safe place to stay using the hashtag #PorteOuverte, which means open door, on Twitter. Currently, residents in safe areas are using the hashtag to connect with those in need.

If you're not in Paris, here are the other ways to help:

You can donate to the Red Cross here, which aids in emergencies across the world. Though currently you cannot donate directly to the French Red Cross, you can contribute online to the International Federation of Red Cross and Red Crescent Societies, which includes the French chapter.

This Catholic relief organization is based in France and regularly helps the underprivileged throughout the nation, in addition to providing assistance during emergencies and crises. You can donate to Secours Catholique-Caritas France online here. (If you have an American credit card, it might be difficult to donate to this group. Friends of Fondation de France, Inc. does take U.S. cards, though. More info below.)

Another poverty-fighting organization, the French Secours Populaire provides material assistance during emergencies, as well as support for the victims. You can donate to the nonprofit here. (If you have an American credit card, it might be difficult to donate to this group. Friends of Fondation de France, Inc. does take U.S. cards, though. More info below.)

While neither the French Secours Populaire and The Secours Catholique-Caritas France processes American credit cards, Friends of Fondation de France, Inc. does accept American cards and you can choose a recurring or one-time donation, and specify what the donation is for. You can donate to this foundation here.

According to Atlanta news site AJC.com, Americans are opening their doors to stranded French tourists unable to return home. Should you want to join the effort and open your doors to those unable to travel overseas due to the closed French borders, simply take to social media with the #StrandedInUs hashtag to connect.

If you are in Paris or in neighboring communities, you can use the hashtag #PorteOuverte (open door) to notify those stranded that you are able to provide shelter. According to Time, the hashtag has been spreading across social media since Friday night, with Paris residents either publicly sharing their addresses or requesting that users message them directly.

As of Saturday, French officials announced the official death toll of the Paris attacks to be a tragic 129. An additional 352 individuals have been injured, with 99 of those injured remaining in critical condition. If you are in Paris or in neighboring communities, you can donate blood to the French National Blood Service, and use the app Don du Sang à Paris for additional information on where to go and how to help.