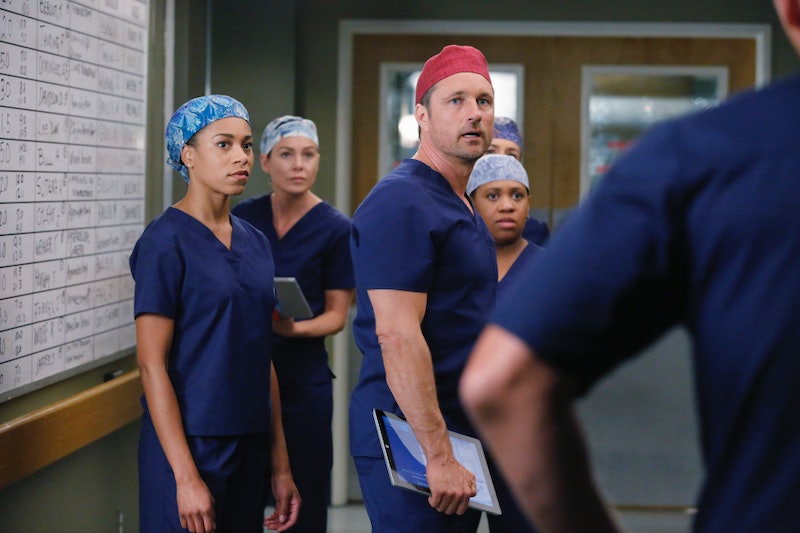 I've got good news and bad news for you Shondaland fanatics. The good news is, it appears that Grey's Anatomy is capable of surviving without McDreamy; now in its twelfth season, ABC's medical soap is having one of its strongest seasons in years (imho, of course), which just goes to show that Grey's is basically indestructible at this point. However, the bad news is that we're about to have to wait a veerrrrryyyyyy long time for more sudsy goodness. This week's episode, "Things We Lost In The Fire," is the last episode of the season before a depressingly long hiatus. So exactly when does Grey's Anatomy come back?

Not until Feb. 11, I'm sorry to say. For those of you keeping track at home, that's exactly 12 weeks after this Thursday's winter finale. Yes, as in three whole months. Why are you doing this to us ABC?? How can we possibly enjoy the 12 Days of Christmas while we're suffering through your 12 Weeks of Torture? Thankfully, it looks as though Shonda Rhimes is preparing to send us off on our holiday break with a doozy of an ep. The Seattle that exists in Shondaland's bizarro universe has already seen bombings, shootings, sinkholes, and superstorms. Now? A forest fire. And you know what a forest fire brings to a hospital? Lots of hunky firefighters. (Thank you, Shonda.) "As the rumor mill around the hospital continues to spiral out of control, Grey Sloan Memorial is flooded with injured firefighters from a nearby wildfire," teases the press release for the episode. "Maggie struggles to keep things with Andrew professional at work; meanwhile, Jo questions Alex's priorities."

The handsome new doctor who has a mysterious past with Owen? Yeah, he's here to stay. Martin Henderson (previously of Shondaland's Off The Map) was hired as a new series regular, which means he'll be around for at least the rest of Season 12... if not much, much longer. Dr. Riggs may not be a replacement for Dr. Shepherd, but he's a welcome new face in a hospital that has grown increasingly light on male doctors over the past few years. Expect more heated exchanges with Hunt as the writers continue to tease the character's history, and more encounters in elevators with Meredith as the writers continue to torment their viewers with hints of a post-McDreamy romance.

Penny's future at Grey Sloan Memorial Hospital isn't only uncertain in the world of the show, but also in the real world. Actress Samantha Sloyan isn't a series regular like Martin Henderson; she's part of the show's recurring cast, which means it's nearly impossible to predict how many episodes she'll ended up appearing in. Even Debbie Allen, who directed the "Guess Who's Coming To Dinner" episode, guest stars as Dr. Catherine Avery, and executive produces the show, doesn't know how long Penny will be around. "How long she’s going to be here, I have no idea, because we never know what Shonda Rhimes is going to do," Allen told Entertainment Weekly after that episode aired. "We’re in episode 9, and it’s its own animal right now. We can’t be sure where anything is going to go."

Am I the only one who can't get enough of this yummy intern and his incredible Italian hotness? (It may be blasphemy to say, but he possibly has even BETTER hair than Derek.) Andrew's flirtation with Maggie has been one of the sweetest relationships on the show in a long time, and I'd love to see these two go the distance. The only problem is, like Penny, we have no idea how long Andrew will be around since he's not a series regular. Considering the fact that the main cast of 15 characters consists of 9 women and 6 men, adding Dr. DeLuca to that list would help balance things out. Somebody promote Giacomo Gianniotti, STAT!

I know, I know; as if the halls of Grey Sloan are EVER devoid of relationship drama. But there should be absolutely no shortage of it when the show returns next year: April and Jackson complicated their divorce by sleeping together, things are tough for Callie and Penny, Arizona is looking for love, and the synopsis for this week's episode teases more tension between Alex and Jo. And that's only the romantic relationships! Then there's all the friendships and working relationships, which are all equally fraught: Meredith/Penny, Jo/Stephanie, Owen/Nathan, etc. And then there's roommates Arizona and Andrew; I'd love to take a peek inside THAT particular odd couple living arrangements.

But by far the most exciting thing to look forward to in 2016 is the addition of two-time Academy Award winner Denzel Washington to the Grey's family. No, he won't be appearing onscreen (yet); rather, he'll be overseeing an episode from the director's chair. Washington (whose two previous directing credits are the 2002 biopic Antwone Fisher and the 2007 drama The Great Debaters) will helm the first episode back from the hiatus, titled "The Sound Of Silence." (No word yet on the plot of the episode, but I'll be ecstatic if it turns out to be a Joss Whedon-esque experimental episode where the entire hour actually plays out in total silence; a counterpoint of sorts to Season 7's divisive musical episode.) And who knows? Maybe if Washington's experience on the show is positive enough, he'll decide to show his face on the other side of the camera in the future! Fingers crossed.

Can we all survive until 2016 with no more Grey's? That remains to be seen. In the meantime, enjoy the one last episode remaining to us before we descend into a sad, Shonda-less hibernation.

More like this
We Finally Know When 'Grey’s Anatomy' Is Coming Back
By Brad Witter
Sandra Oh Says Early ‘Grey’s Anatomy’ Fame Caused Her To Get “Very Sick”
By Brad Witter
A New Season Of The Midwich Cuckoos Could Be Coming “To A Town Near You”
By El Hunt
The ‘Love, Victor’ Showrunner Gave Fans Hope For A Possible Spinoff
By Brad Witter
Get Even More From Bustle — Sign Up For The Newsletter