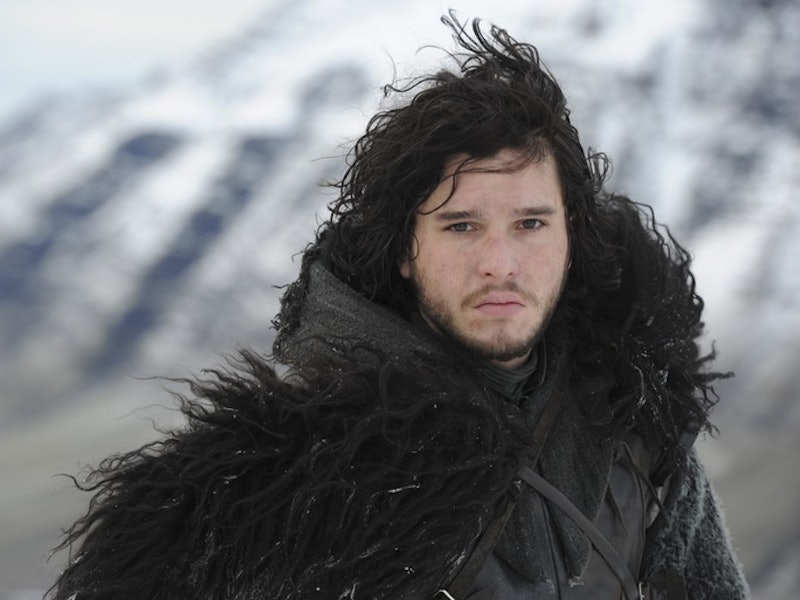 Jon Snow is coming back. How do I know? Because he’s definitely coming back! And I have the concrete evidence to back me up. The death of the Lord Commander was the end of Season 5 of Game Of Thrones, but it was just the beginning of the deluge of theories about Jon Snow’s fate. Suffice it to say, that new teaser poster is more than a subtle hint that Jon Snow will come back in Season 6, even though the other cast members are still split on the subject.

Some cynics think that even after the poster was released, showing a bloodied up Jon Snow with one eye obscured and only the ominous APRIL written below, that Jon Snow might not be coming back. But I can’t blame them (even though he’s definitely coming back), since it’s hard to keep up hope with Game Of Thrones. Never get attached to a character. All men must die!

In the frantic days and first few months after Season 5 ended with “Mother’s Mercy,” the only real rumors about Jon Snow living on were in Kit Harington’s refusal to cut off his Lord Commander coif. Now, thankfully, there’s a lot more solid evidence, but the hair thing really played out incredibly accurately. The most telling and some of the most recent signs that Jon Snow will be back in Westeros:

He Was Spotted Filming

I know Game Of Thrones has a huge production budget, but I don’t think they planted Jon Snow at the scene of filming just to throw viewers off. Kit Harington was spotted filming actual scenes by a member of the fan-site Watchers On The Wall. Seen in Northern Ireland, Harington was filming with Sansa Stark (Sophie Turner), Ramsay Bolton (Iwan Rheon), and Littlefinger (Aiden Gillen). This is so exciting — I’ve been waiting for some of the Stark children to find each other again since Season 1. Also, Harington was also not dressed in the black of the Night’s Watch, but in armor of a Northern bannerman.

Watchers on the Wall said the scene, being filmed in the Winterfell courtyard, was "tense" and even included the appearance of giants.

And that’s not the only time Harington was seen on the scene. Back in September, Harington was caught filming another scene in Belfast, again not in his Night’s Watch cloak but in the armor yet again. How does Jon get back into battle?

That Teaser Poster, Though…

Unless showrunners David Benioff and David Nutter just want to torture viewers by releasing a picture of Jon Snow’s corpse, I think this teaser poster is a definite sign that Snow will play a major role in Season 6.

The legal documents don’t lie. Harington, 28 years old, admitted in an interview with the Dutch-language magazine Humo that he would be tied down to GOT until he "in his thirties."

He’s Been Hanging Around All The Sets

Before there were photos of Kit Harington actually filming, there was plenty of lurker evidence of him on sets in Belfast and London, even buying groceries. Clearly he wasn’t just there to give his co-stars moral support.

It seems like sometimes the simplest signs turn out to be true. Why would Kit Harington keep that hair if he weren’t playing Snow? That shaggy devil-may-care nonsense might be his personal style, who knows, but that cut is DEFINITELY Jon Snow’s signature look.

Jon Snow is coming back: but the question still remains, how exactly will he return?