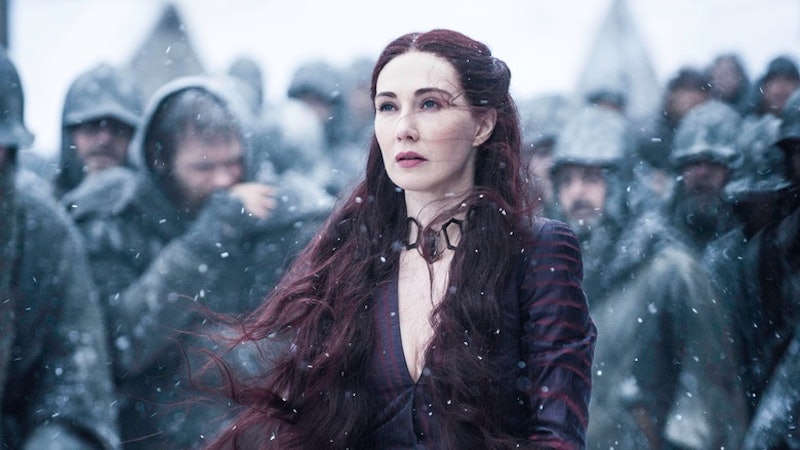 There are only five months or so left until the return of Game Of Thrones, which honestly, is still an eternity. The HBO show ended Season 5 with some of the most frustrating cliffhangers ever — they really know what they’re doing over there to keep their fanbase committed. But spoilers and rumors are fun to indulge in, and luckily, even though the cast and crew claim they are ultra-secretive, there are tons of GoT rumors out there that could prove to come to fruition during Season 6.

First and foremost, our good old Lord Commander Jon Snow--most of the questions and theories about Season 6 are if and how Jon Snow will return from the dead, or if he's really dead at all. The most recent teaser poster which was released last week reignited a firestorm of Jon Snow theories, which were already smoldering. But there are other exciting and telling leaks and rumors that you can get lost in. Here are some you may have missed while obsessing over how Jon Snow will live:

Jon Snow Is Coming Back From The Dead

It’s safe to say that Jon Snow is coming back, and if you need to brush up on the clues as to why, there are just about as many as there are horrible men in the Seven Kingdoms. First, my favorite: Kit Harington never cut off those sadboy Snow locks, and that actually proved to be a prudent sign that the Lord Commander would return, despite bleeding out at the end of the season finale “Mother’s Mercy."

Also undeniable, really: Kit Harington has been spotted officially filming in scenes at the Winterfell set in Northern Ireland, caught on camera by Watchers On The Wall, one of the most thorough and devoted GOT fan sites. How Jon Snow will return is still unclear; he will definitely need some magic (light or dark, but probably dark, since this is GOT) to revive him. That magic could come from Bran, the blood of the dragon, or Melisandre.

This is the most recent rumor from Watchers On The Wall, who reported via equally-committed fan site Los Sietes Reinos that Carice Van Houten, who plays the Red Priestess, “had little filming time this year, and her scenes were all wrapped up in secrecy. It’s likely that Melisandre was there for Jon’s resurrection and L7R’s sources confirm that Jon’s direwolf Ghost was present as well. (Well, his special effects ball-on-the-stick was.) Reportedly, the Ghost-stick has been used a lot more for Season 6 than previous years, which points toward Ghost having a big role next season.”

This is exciting news, because it might actually tell us something about Season 6 that’s not so hopelessly vague. It’s suspected that Melisandre will have a hand in Jon’s return, since she rode to the Wall after Stannis’ death. There’s always the shadow of Beric Dondarrion with Melisandre; she hasn’t brought anyone back from the dead herself, but she saw Thoros of Myr bring Beric back from the dead. But he was forever changed by the dark magic--which some fans think is Jon’s fate, too, pointing out in the teaser poster that Jon Snow’s left eye is obscured, meaning he may not return as his full self. Those mega-fans really know to think between the lines.

Someone Else Is Coming Back, Too

If Season 5 of Game Of Thrones was the season of cruel deaths (even moreso than all the cruel deaths in past seasons), it looks like from rumors that Season 6 will be the season of resurrection. Ian McShane, who was added to the cast in August, revealed something super-spoilery about his mysterious role: in an interview with Pop Goes the News, the former Deadwood star said that in a one-off episode, he'll be "responsible for bringing somebody back that you think you’re never going to see again. I’ll leave it at that."

So who could it be? Naturally the first inclination is to think JON SNOW PLEASE, but fans also suspect that McShane could bring back the Hound, Sandor Clegane, or Lady Stoneheart, which would delight just about everyone.

Khaleesi Spends Time With The Dothraki

Not surprising, but still good to have confirmation: it looks like the Mother of Dragons Daenerys will be spending more than a little time with the Dothraki riders we saw surround her at the end of Season 5.

New cast member Ellie Hadad accidentally Instagrammed and deleted some leaked photos of script pages (he just wanted to show off his excitement!) but not before fans got a hold of it. It's not very indicative of the plot, but the vulgar dialogue that the Dothraki have about Dany in the script pages hint that she might be at their mercy. I hope she's as strong as ever and takes them down with fire.

The Whitewalkers Will Be Back

The epic battle at Hardhome, when winter finally arrived, introduced us to the boldest, brashest Whitewalker of all: the Night's King. GOT can't just bring us such a cool (literally) character, then abandon him never to be seen again. Plus, the Whitewalkers are scary and magical creatures, both more of which we need on-screen.

So good news that Miguel Sapochnik director of the amazing Hardhome battle sequence episode will be directing the final two episodes of Season 6, leading to whispers that he might be doing another intense battle scene.

And the director himself couldn't help teasing when he tweeted on Nov. 8 this VERY telling photo, showing that there WILL in fact be a Whitewalker unit in the filming of the last episode. What more proof do we need?!

I need some spoilers about what exactly Bran has been up to, and what the hell is going to happen to poor Arya Stark. For now, though, these will do. Forge on through the winter, Westeros loyals! April will be here...eventually.