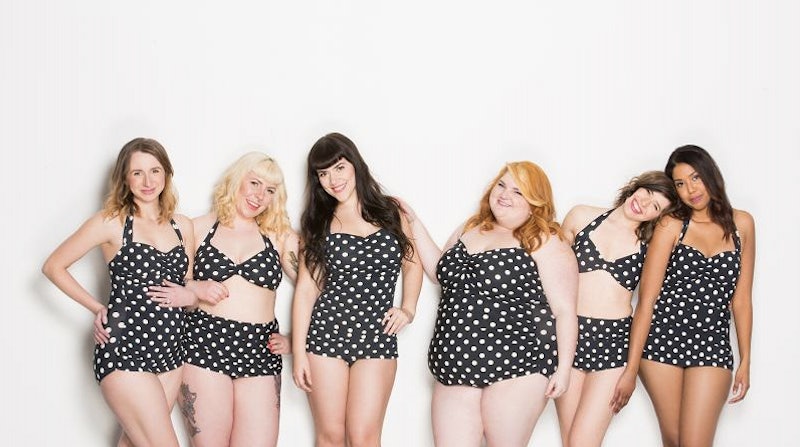 Feminism has always had a place in fashion, from women raising their hemlines in the '60s to padding their shoulders to gain credibility in the boardroom in the '80s. And that holds true today, easily observable when thinking of the most feminist moments in fashion in 2015 — ranging from androgynous fashion lines to the deconstruction of ageism. Historically, feminism has often triggered some sort of sartorial change, whether it be burning bras or ditching the corset; and that shouldn't really come as a surprise. While some might see fashion as nothing more than a materialistic pastime to fluff our vanity, they're overlooking one obvious point: It's a platform. Fashion has the world's attention, and because of it, it's an important piece of social commentary.

Feminism needs visibility and fashion can help provide it, as we've seen with 2015 trends. From "Free The Nipple" taking over the runway to body positivity being discussed in a serious way, all of these movements reiterate a foundation of feminism: That a woman's value isn't to be found in her socially-defined beauty, youth, or sexual availability. That she has more to offer than her image. Below are seven of the most feminist moments in fashion of 2015, proving that style can be an important platform.

On Jan. 24, 2011, Toronto Police Constable Michael Sanguinetti was speaking at a York University safety forum to address the issue of campus rape, when he came out with a not-so-helpful tip. "I've been told I'm not supposed to say this — however, women should avoid dressing like sluts in order not to be victimized," he said.

Floored over how the Constable himself put the responsibility of rape on the victim based on stylistic choices, the Slut Walk was created to protest slut shaming and the notion that a woman should expect violence if she chooses to express her preferences in a way deemed too provocative.

This year, the L.A. Slut Walk was led by Amber Rose, and it was a feminist win in fashion because she brought attention to how a woman's dress shouldn't be a trigger for cruelty or degradation. She also brought this to light with the anti-slut shaming dress she wore to the MTV Video Music Awards red carpet in August, graffitied with derogatory terms like "hoe" and "goldigger" that are designed to bring down women.

Arguably gaining popularity thanks to the 2014 documentary of the same name by Lina Esco, Free The Nipple grew into a larger call for gender equality; and many have kept it going strong by flashing their nips on Instagram and Twitter, gathering for topless protests, and — this year — it's even a hit on the runways.

Whether you feel comfortable going with support yourself, the notion that the nipple isn't a pornographic, hyper-sexualized thing is getting some much-deserved headway.

3. Gender Ambiguity On The Runway

Androgynous fashion in the past has usually meant "borrowing" from the opposite gender: Women dressed in masculine shapes, sporting Sinatra-cut suits and men going wildly effeminate with glossy makeup and '80s-esque hair (just think David Bowie or Prince). But 2015 has seen further blurring of the lines through a complete disregard for "his and hers" altogether.

For example, Selfridges — a major UK department store — announced a genderless pop-up store this year, at which there was no marked difference between the male or female clothing. Then Moncler Gamme Rouge came out with an androgynous Fall/Winter campaign, where models wore a medley of the same clothes with no real distinction between which was meant to be male or female.

By creating this kind of ambiguity, we begin to deconstruct our traditional ideas of what's feminine and what's masculine. There's no right way to be male and female or neither or both.

And then we have designer houses like Gucci that are trying to balance the differences between genders by erasing the line of what is feminine. By outfitting the men's 2015 fall collection in a parade of pussy bows, sheer blouses, lace overlays, and feminine cuts, Gucci addressed the fluidity of gender. Women can adopt suits, sure. But men and masculine individuals can also adopt dresses.

Feminist artist Christen Clifford is fighting the patriarchy with a pretty pink scarf tied into a pussy bow around her neck. How is that a stand for feminism, you might ask? Her scarves feature printed images of the inside of her vagina.

Cheekily named the "Pussy Bow Scarf," she made it clear that fashion and art go hand in hand in order to show women that there's no shame to be found in their bodies. Clifford told MTV News, "I grew up with so much shame about my body and my sexuality and I don’t want that for anyone else — shame makes you feel like you yourself are inherently bad. Generations of women grew up feeling this way, and so many women artists before me have been trying to fight the shame.” Whether you support the idea that a female's reproductive system is nothing to gag over and fear, or you just really like soft, pretty colors, the notion of the "pussy bow" helps bring the feminist conversation back into the mainstream.

5. Ageism Got A Slap In The Face

This year, we've seen an awesome surge of mature women in the spotlight being celebrated for their beauty, style, and a refusal to blend into the background just because they're of a certain age. Coming from a youth-obsessed culture, the media gives off the impression that once you've hit a certain birthday, you've lost your value. But this year we've seen a different narrative develop.

Helen Mirren (70) landed a national beauty campaign, agreeing to sign with L'Oreal only if the brand didn't Photoshop any of the pictures to make her appear younger. Then we saw major design houses like Celine using 81-year-old Joan Didion in its campaigns, Kate Spade working with 94-year-old Iris Apfel, J. Crew styling 65-year old Linda Rodin, and Target Australia nonchalantly using a silver-haired model in a bikini ad.

This is a huge feminist leap in fashion because it proves that a different narrative is getting airtime. It's one that says a woman's worth isn't diminished with age. Her beauty doesn't fade, and she can't be silenced. She still has a role to play in our culture, right along with the fresh-faced 18-year-olds.

This has been a monumental year for the body positivity movement, during which both society overall and brands began a more honest dialogue about the detrimental effects of beauty standards placed onto women. Bodies aren't all meant to be tall, slim, and with "just the right amount of curves," but rather whatever shapes they come in naturally, or whatever shapes they are due to the individual's preferences.

In 2015, we saw brands like Curvy Kate taking on the idea of the "perfect body," LUSH launching a "Go Naked" campaign that was void of any airbrushing and showed women of all body types strategically and happily naked, and ModCloth's swimsuit campaign, which redefined what it means to be beach-ready. All these new adverts and campaigns are part of a wonderful movement to re-vamp the idea of what a woman looks like: She's not just one shape, color, and size. Nor should she be shamed into feeling like she should be.

In September, H&M released a video entitled "Close The Loop" to shed light on its recycling efforts, but it also proved to be a giant leap for feminism and inclusivity in fashion. Sharing a series of previously-thought fashion faux pas, the campaign urged viewers to break any sartorial rules that'll help them express and love themselves. Some novel ideas were to wear a short, flirty skirt after age 40, to dress "masculine" if you want to, to feel A-OK about pantylines, to not hide behind "slimming" colors if you're plus size, and to not give a damn if you love your armpit hair and want to flaunt it.

These moments and more have been beautiful, fun, and liberating. And at the end of the day, that's what fashion should be all about.

More like this
Sandra Bullock, Girlboss Extraordinaire
By Matt Harkins & Viviana Olen
12 Triple Lobe Piercing Ideas For A Truly Unique Stack
By Paris Giles
'The Circle' Season 4 Star Yu Ling Wu Is Already A Beauty Icon
By Erin Stovall
The Little Princess Trust Is Accepting Afro Hair Donations For The First Time
By Tomi Otekunrin
Get Even More From Bustle — Sign Up For The Newsletter