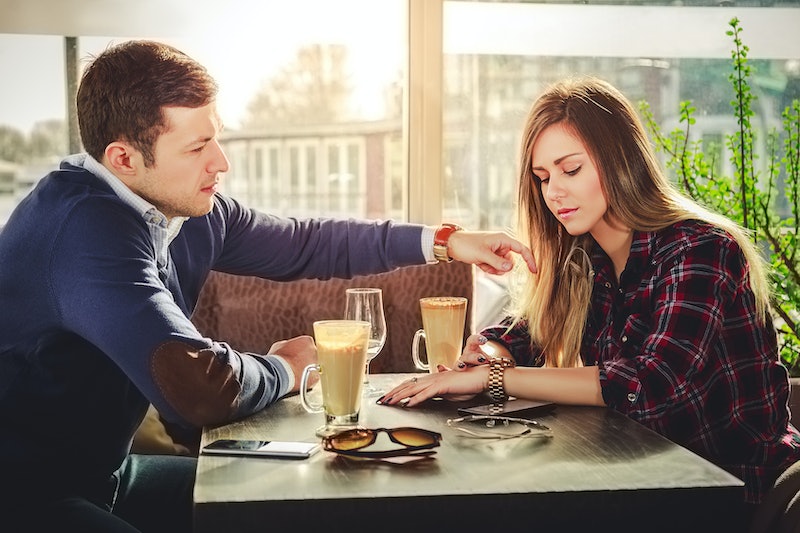 Ever seen signs that your relationship is over, even though it hasn't necessarily been said out loud yet? Many of us have been there. Behavior plays an integral role, though, in determining if something is no longer what it once was. Sometimes, people play games. Or they avoid the topic at hand, but you just know something’s off.

“I encourage couples to check in with each other on a regular basis, typically weekly,” Jeffrey Sumber, MA, MTS, LCPC, tells Bustle. “That’s an opportunity to see whether things are going amazingly or if someone’s struggling.” (Sumber even has a free download on his website called The Check-In Dialogue).

Ah, great advice, if only it were that easy, right? That’s probably why ghosting’s become such a trend — it’s easier to just disappear than tell someone we’re not into them and don’t want to see them again.

I do feel we get signs from our S.O. or person we’re dating that it’s the beginning of the end — like passive-aggressiveness or lack of sex. “Passive-aggressiveness in relationships is huge,” Dr. Suzana Flores, clinical psychologist and author of Facehooked: How Facebook Affects Our Emotions, Relationships, and Lives, tells Bustle. “It’s not the best way to communicate problems and certainly not the best way to end a relationship.”

I’m sure many of us have experienced passive-aggressiveness from a partner. Something will be wrong, they won’t say anything, and it’ll make us do the dirty work. (Or maybe we’ve been that person.)

Of course, a decrease in physical intimacy is another telltale sign, I think. “Sex is always a big giveaway,” Tina B. Tessina, P.h.D. (aka "Dr. Romance"), tells Bustle. “If you're having trouble with sex, either you're dissatisfied and don't get enough, you feel your partner wants too much, or the sex is fading out of your relationship — it's a [bad] sign. Sex is just a physical form of communication.”

The old me sometimes missed the this-is-about-to-end warning signs in relationships. (Or perhaps I was just in denial.) But the me of today — having read lots of self-help books (like It's Called A Breakup Because It’s Broken , from Greg Behrendt, one of the writers of He’s Just Not That Into You , another great reminder read), talked to amazing friends, and gone to therapy — knows when to say goodbye to an ill-fitting relationship and also how to recognize the signs that things are going in the wrong direction. (At least, I hope I do!)

Bustle readers agreed about seeing signs before the breakup storm, and shared about the moment they knew their relationship was over.

“My girlfriend and I lived together—she moved in with me—and I noticed she kept removing her personal items. One day, it would be books, another it would be clothes. I thought she was trying to downsize… until she then removed herself, too!”

“Simple. We stopped having sex. He was never in the mood anymore, and I think my partner should want to have sex with me, not view it as a chore.”

“The moment I knew my relationship with my boyfriend was over was when we had our first disagreement. Instead of trying to talk it out, he kicked me out of his home. I felt so disrespected. We worked it out, but I never truly forgave him and that resentment was the beginning of the end for me. Our relationship was full of fighting, and the last argument we had included hurtful words and names from us both, me trying to leave, and him yelling in my face to stay and almost becoming physical. The day we finally went our separate ways was my happiest moment in that entire relationship.”

“This was back in the day of answering machines. He and I had had a handful of dates, and I thought we were progressing to boyfriend-and-girlfriend status. We got back to his place after a date and he pressed “play” on the machine… and a woman’s voice was gushing about their date the other night — and about their hot makeout session. This sign was a clear one, but I should have been more suspicious before then, when he had vague plans (nights I would not see him) or would not call to say goodnight on certain nights (when he was probably too busy making out with someone else!).”

“I knew we’d soon be done when he started hanging out with his newly single female friend more than me. (In fact, they ended up getting married!) A woman always knows, so listen to your instincts, ladies!”

“I have been married twice. I knew my first marriage was over when my sister-in-law asked me when my husband and I had gotten ‘back together!’ — when, in fact, we had never been separated. However, without the separation, he had taken a girlfriend with him to visit his sister just a few weeks before! YEP. Over!”

“I was single for nine years before remarrying. My second husband had quit smoking for five years and had never been a drinker. He was, however, an avid TV watcher/couch potato in the evenings after work. Suddenly, it seemed he was both smoking and drinking AND finding lots of excuses for being away from home in the evening. I overheard him talking about a particular television show that he had watched the evening before — when he was out. It dawned on me that he had been cheating on me. I confronted him. He made up some excuses — he was NOT a good liar. Without trust and loyalty... the marriage was over.”

“My friends saw him on dating sites, like OkC and Tinder. At least that made it easy to break up with him.”

“The funny thing is, I am a psychologist who does couples work... My second marriage is heaven, my first was a nightmare. Two weeks after my wedding, my first husband quit his corporate job and joined a band (not joking). He started being his own biggest fan, living a fantasy lifestyle, and would go out drinking (on my dime, and I have a serious chronic illness) every night, not come home, and would not answer his phone. Never knew where he was, or whether he was alive or dead. He could not see what was wrong with this. There were two incidents (sorry, so hard to choose).

The first was him going out drinking and not strolling in until three hours after I had left to celebrate Christmas with our family (no one could get ahold of him). I did leave him the next day. The other was that he traveled a lot for his job. He had a relative who was sick and dying. He actually came home one night and passed out from drinking. His phone rang, I tried to wake him up, he was immovable, so I answered. It was the middle of the night, it was the area code of that relative, and I feared the worst. On the other end of the line was a girl asking me who I was. I said that I was the wife of X. I asked who she was, and she told me she was the woman sleeping with my husband and did not know he was married. This was the same week... and it was true.”

“The moment I knew my relationship with my husband was over was when he started getting emails from Match!”

“The moment I knew it was over... was when the ex said he was stepping out to grab smokes and came rolling up two days later.”

“Once again, I was receiving a lecture on how I had messed something up — one in a litany of such lectures. I was suddenly aware of how my life had shrunk. How I didn't do things I had once enjoyed because I didn't want these lectures about how ‘bad’ and ‘wrong’ I was. It was the prelude to my leaving. It's quite amazing how one of those moments sticks with people. There are thousands of wonderful moments, mind pictures that I could hold as sharp memories — and that little moment of realization is the one that arrives when I think back. Of course, in the dance of a collapsing relationship, when a person moves back or shrinks, the partner moves forward or expands, so of course things get worse. I think men and women in relationships need to pay attention to those fleeting thoughts that intuition sends.”

“The moment I knew my relationship with my boyfriend of two-and-a-half years was over was when I wasn't getting sexually satisfied in our monogamous relationship and he wasn't open to going to a reputable sex coach for help. I was on a journey of sexual exploration — attending retreats, workshops, and even worked with a sexual body worker. I learned that I was capable of so much more pleasure; however, in order to experience that, I couldn't focus on mutual sexual pleasure simultaneously all the time. He claimed that everyone he had ever been with, except me, was always satisfied. I attempted to work with a private sex coach, but he kept putting it off, canceling, while I continued to be unsatisfied to the point of not wanting to have sex with him at all. Kind of ironic, having created an organic product for sex.”

“The moment I knew my relationship with my boyfriend was over was when he complained about the cheap sandwich meat I'd just bought and then didn't smack my butt as I was bent over putting away the groceries. He usually would and whistle at me whenever I did laundry or the dishes. We ending up having the breakup talk the next day.”