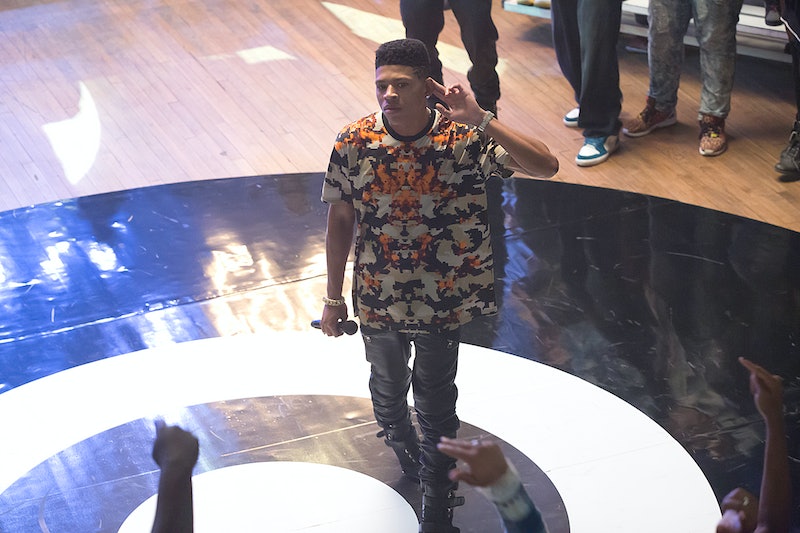 I'll remember 2015 for putting many stars in the spotlight, but there's one TV show that I feel truly defines this year: Empire. The series became an instant hit when it premiered in January and its success hasn't slowed down as it began Season 2 in September. So it's only fitting to sum up the events of 2015 in Empire song lyrics. The series gifted us with lots of original songs from its talented cast, which includes real-life musicians Bryshere "Yazz" Gray (who plays Hakeem Lyon), Jussie Smollett (Jamal), and Terrence Howard (Lucious).

Empire also welcomed many guest stars who sang along, like Alicia Keys (as Skye Summers), Bre-Z (as Freda Gatz), Serayah (as Tiana Brown, now a series regular), Jennifer Hudson (as Michelle White), Courtney Love (as Elle Dallas), and Estelle (as Delphine). And all of those established and new artists, along with the behind-the-scenes brass — Timbaland, Ne-Yo, and Swizz Beatz — help Empire's tunes feel so 2015. Earlier this year, the Season 1 soundtrack debuted at No. 1 on the Billboard charts, so it seems that audiences felt the same way.

Let's look back on this eventful and crazy year using Empire song lyrics, because it's truly the most fitting tribute.

Swift released her smash hit album 1989 in 2014, but it truly became a phenomenon throughout 2015. Taylor said goodbye to that country-crossover persona and embraced a 100 percent pop sound, essentially becoming Taylor 2.0. Not only that, but her squad-mate Serayah sings this Empire song.

Ain't about the money, it's about the power — From "Ain't About The Money"

It was only a matter of time — we all knew Hillary Clinton was going to throw her hat in the ring to run for president. But sometimes that quest for (presidential) power is about the (campaign) money. Her 2008 campaign ended with a lot of debt, which she finally paid off in 2013, as reported by CNN. Hopefully, this time around this Empire song will ring true, and money won't be an issue.

I see the way you're looking at me / You're wishing you could be on my team / We be up on that, making everybody mad — From "New New"

A new princess was born to the UK! Prince William and Catherine, Duchess of Cambridge, welcomed their second child, a daughter whose middle name pays tribute to William's mother, Diana. She joins little Prince George in a squad we all certainly wish we could be part of.

You're so beautiful (shake it, shake it) / Give the world a show (move it, move it) — From "You're So Beautiful"

Jenner graced the cover of Vanity Fair this year, revealing herself as Caitlyn to the world for the first time. As this song says, there's nothing more beautiful than being yourself.

After a long battle, finally the Supreme Court ruled that same-sex marriage would be legal across the United States. Love won! And everybody knows it, too.

The GOP candidate has taken aim at many people for most of this year and it feels like no group is safe. Reckless indeed.

From the Emmy-winning Inside Amy Schumer to the Golden Globe-nominated Trainwreck, Schumer took center stage and got us sit back and listen as she made audiences laugh all year long.

Tell them I'm comin' and nobodies stoppin' me / I want it all and that's just how it got to be / Handle my business, I do it so properly / Nobody copy me, my monopoly — From "Bout 2 Blow"

This spat gave us a summer filled with diss tracks. Meek claimed that Drake didn't write his own rhymes, and Drake shot back. It seems to be over — for now.

My heart needed some medicine, couldn't find the right remedies / Sinking into the quicksand / Tryna hide the way I feel / Written over in my heart again, until I knew it was real — From "When Love Finds U"

The Voice Season 9 coaches went through their respective rocky summers — Shelton divorced from wife Miranda Lambert, while Stefani divorced husband Gavin Rossdale. Then, Shelton and Stefani found love with each other — say it with me: Aww!

His holiness visited the United States in September, causing a stir in Washington, D.C., New York, and Philadelphia, and giving Catholic Americans a faithful celebration.

I wanna live, I wanna live my life today / Make a better way for me and you / When the sun woke up, I got on my knees to pray / Let the injustice be solved and mended today — From "Born To Lose"

Sigh. According to Shooting Tracker, there have been 353 mass shootings in the United States in 2015 alone. Last month, terrorists shot more than 100 innocent people in coordinated attacks in various locations in Paris. Like this song lyric says, we need to make make a better way.

We'll have to wait and see what 2016 brings, and how Empire gives us the perfect way to put those events into words.

More like this
What Is Barack Obama’s Net Worth? He Makes *Way* More Now As An Ex-President
By Hugh McIntyre
Britney Spears Met The Weeknd & Sam Levinson, So She May Actually Be On 'The Idol'
By Jake Viswanath
Taylor Swift Knew Hayley Kiyoko & Becca Tilley Were Dating 4 Years Ago
By Grace Wehniainen
Mick Jagger Calls Harry Styles A "Superficial Resemblance" To His Younger Self
By Jake Viswanath
Get Even More From Bustle — Sign Up For The Newsletter