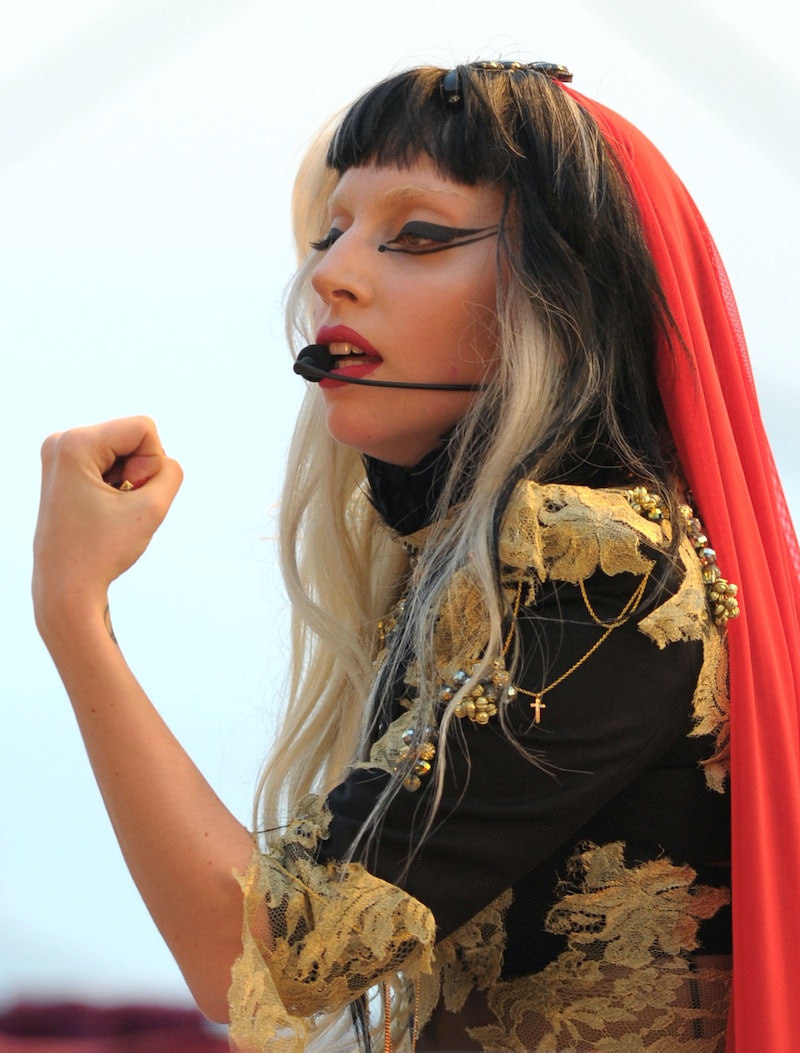 Back in the day, I used to think that women who wore a full face of makeup were bowing down to society’s rules of what constitutes "femininity," and opting to do what was expected of them. But as I've grown older (and hopefully wiser), I've begun to consider the idea that wearing a full face of makeup can actually be an act of body positivity.

As an adolescent in high school, I was fascinated by the gals who would wear a face decorated with makeup for class. I was curious as to why they felt the need to pile on lashings of chemicals and colors onto their already-beautiful skin and hide their natural looks. Not to mention that my own beauty skills were very basic, and I wouldn’t have even known where to begin trying to recreate their looks.

Upon learning more about feminism and starlets like Dita Von Teese, however, I realized that makeup can be used to reclaim one’s interpretation of femininity and highlight areas that the wearer is most fond of. Certain humans in the celebrity world (and otherwise) also use makeup for a totally different effect. Lady Gaga, for instance, has worn gender-bending looks like gender-neutral, clown-inspired makeup and spooky claws that have lent her a feminine yet historically "unattractive" witchy vibe. IMO, she is a beauty pioneer; she wears makeup that sometimes conflicts with the ideals set by society, and proves anyone can look amazing doing the same. With all that in mind, here’s why wearing a full face of makeup can actually be body positive.

1. It Can Be A Way Of Owning Your Face

People who wear a full face of makeup every single day by choice and not because of societal pressures are doing exactly what they desire when it comes to their looks. Completely owning the way you present yourself to the world in a way that feels right to you is nothing short of body positive.

2. Makeup Can Be An Artistic Expression Of Yourself

The face makes for a wonderful canvas and with new, innovative beauty products and tools being released constantly, it's no wonder that creative people are using their bodies to formulate their next masterpiece. Using your face to portray your hidden artistic talents and personality is a great way to fly the flag for body positivity.

3. Wearing Eye-Catching Makeup Might Suggest You're Comfortable In Your Own Skin

People who are unafraid of wearing bright or eye-catching makeup of any kind (something that could cause more people to look at them) are likely comfortable in the skin they’re in. Otherwise they probably wouldn’t want to draw attention to their appearance. These individuals are rocking self confidence and the fact that there's no shame in being proud of your body and the way you present it, which is an amazing thing.

4. You Can Draw Attention To What Makes You Unique

Perhaps you’re someone who has tons of freckles, a port wine stain, or really plump lips. Everyone has something that makes them unique and makeup can help you highlight this area (or areas) to draw attention to your individuality. Being confident about what makes you you is a brilliant body positive signal.

People who jump on the beauty trend bandwagon, IMO, have lashings of inner confidence and a great sense of self esteem. These are the folks who are masters of makeup, who will give any trend a go, and who are unafraid of looking a little silly. They don’t just rock the trends that are deemed “attractive” by society. Rather, they try them all out to discover the ones they like the best. These beauty babes are often super creative people who have no qualms about their facial features, and they don’t care if they get ridiculed for experimenting with the most cutting-edge beauty looks.

6. It Can Raise Awareness Of Different Gender Identities

Wearing a full face of makeup as someone who identifies as female is often perceived in two ways. The first, unfortunately, is that the individual is perpetuating the beauty ideals and standards set by society and the media — that the woman looks more attractive or more "socially acceptable" by wearing a full face of makeup rather than a naked face. The second, more uncommon one is that the lady might be aware of these "norms," but she enjoys wearing makeup for herself.

But when someone who is not a female or feminine person — like a cis man or a genderqueer person, perhaps — wears makeup, it has the potential to shatter taboos and make a hard-hitting body positive statement. In the past, makeup has often been associated with women. But other people are starting to use it to open the world's eyes to a gender spectrum that is less binaristic and less archaic. Makeup can be used to celebrate all gender identities and make others more aware of the many ways there are to have a body. Plus, it sends a great general message that people should not be put into boxes.

7. It Can Help Change People’s Perceptions Of Beauty

The world is (hopefully) changing for the better, and I personally feel grateful to have been born in this era. The advances in technology that have made our lives easier are incredible. The current spotlight on feminism has been long awaited. And the amazing advances in medicine are just a few of the great things to have been born out of the 20th and 21st centuries.

But one of the most brilliant things I have discovered in recent years is body positivity, and recognizing that every body is beautiful, in addition to the realization that we no longer need to measure up to the beauty ideals that the media and society have set for us. By wearing makeup that challenges beauty "norms," such as brightly colored eyebrows or unconventional lipstick colors, we can all gradually help change the world's perception of the term “beautiful.”

So next time you see a woman wearing a full face of makeup, please don't jump to conclusions. She may be wearing the makeup for herself and not for anyone else. In fact, she could very well be proud of her body and not afraid to show it. And for all the other folks you see sporting a full face of makeup in unconventional ways, just show them your support at their body positive bravery in breaking boundaries and let them know that you think they're awesome.

More like this
Most Comfortable Underwear For Big Butts
By Audrey Williams
42 Black Owned Fashion & Beauty Brands To Support Today & Always
By Mekita Rivas, Shea Simmons, Kui Mwai and Dominique Norman
11 Fall 2022 Makeup Trends You Can Start Wearing Now
By Olivia Rose Ferreiro
14 Fall Lipstick Colors That Are Trending For 2022
By Audrey Noble
Get Even More From Bustle — Sign Up For The Newsletter