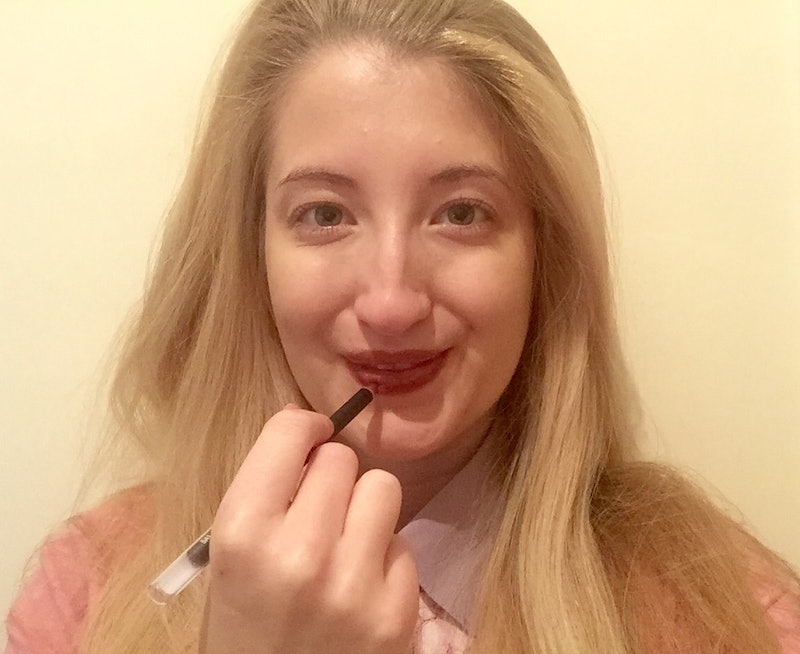 Cher Horowitz and her BFF Dionne Davenport of Clueless have been my style and beauty icons since childhood. So as an older and (hopefully) wiser version of my young self, I wanted to become Cher Horowitz for a day and follow her awesome beauty routine with the goal of transforming into a total Betty.

Cher was the epitome of '90s chic: Her hair was flawless and she constantly looked as though she'd just been in for a blow dry. Her lip liner was totally on point, and she wore plaid like it was going out of fashion. Growing up, I had always dreamed of being as perfectly put-together as Cher. At the same age as her (16) I had no chance of pulling off her immaculate style, though. My makeup routine consisted of wearing too much dark eyeshadow, a bit of mascara, and not much else. But these days, with a little more know-how and way more products in my beauty arsenal, I felt ready to unleash my inner Ms. Horowitz. Plus, with the new year upon us, I wanted to celebrate Clueless' 20th birthday in 2015. What can I say? I'm a sucker for nostalgia.

Here's what happened when I followed Cher's beauty routine.

There is no mention of Cher applying foundation or any base makeup during her morning routine in the film. However, her skin always looked utterly flawless. And it would be quite unusual for a beauty pro like Cher to wear other types of face makeup without applying a base layer first, right? So I started by applying my everyday moisturizer and foundation (plus a little mascara) in an attempt to feign her bright eyes and to bring my 26-year-old skin up to par with Cher's teenage complexion.

Clueless is a snapshot of a period in Cher's life where she tries to argue her way from average grades to an impressive report card, while navigating the peaks and troughs of her teen life. So as the movie does not follow a single structured day of Ms. Horowitz' life, I have compiled together some everyday things she did when styling herself, along with some other beauty looks that could construct a fictional, average day in the life of Cher's beauty routine.

I began Cher's beauty routine by brushing my hair with a paddle brush to give myself a tousled look. This gal is a master hair flipper and finger combs her locks so many times throughout the film that it's actually really funny when you start noticing it. Could this be a new drinking game, perhaps? Cher Hair Flip Shots?

I'm pretty low maintenance when it comes to my mane, so I really can't relate to Cher's quintessential flip. When I tried to do the same, my locks were covering my face all the time, which I found to be very annoying. So although I really like how it looked, I felt it just wasn't practical for me. Sorry Cher, I won't be adopting this hairstyle in everyday life.

Cher is also seen applying her iconic '90s brown lip liner. It appears that she uses it to outline her lips and then fill them in, so I did this, too. This was a very different experience for me, as I tend to only wear red lipstick with a matching liner on occasion. It was really bizarre to use a lip liner to color in my entire lip. It was just uncomfortable — verging on painful, actually — as the pencil was new and pretty sharp.

The color reminded me of shades my mom's friends used to wear when I was growing up. In terms of colors I normally wear, I tend to steer clear of earthy hues like brown, maroon, mustard, or khaki. I feel like cooler shades or lighter pastel colors suit my pale complexion and blonde hair better. So I wasn't such a fan of this chocolate brown lip liner. So far, my day as Cher was 0 for 2.

In one of the most memorable scenes of the movie, where Cher and Dionne "adopt" Tai, the girls are lining up to have one shot at hitting a tennis ball during their gym class. Cher is seen with her hair up in a ponytail with loose wisps and possibly nude-colored lipstick. My lippy was a Lime Crime Unicorn Lipstick called "Eraser." This athleisure look was more up my street. I had a color on my lips that was more feminine and more to my liking, plus my hair was (mostly) out of my face. This hairstyle was a relief to wear after all that flipping.

At this point, I had to have a Diet Coke just like Cher and the gang, because hello, I was totally in need of some caffeine, OK?

Since Cher wasn't really into dating (because dating high school guys is pointless) we could class her one date with Christian as a rare occurrence. Therefore, I believe on an average day, she would go to school and then maybe a party afterwards.

Unfortunately, we don't get to see Cher prepare for her appearance at the Valley party, but we do get some hints as to how she readies herself for a special event. When she gets ready for her date with Christian, she is spotted with her hair in rollers, presumably to make sure her locks are super voluminous.

My rollers, however, didn't make a blind bit of difference to my hair, possibly because they were heated rollers. Normally when I use these, I will heat them in their special machine prior to wearing them, only to be left with big, bouncy, curly hair. I thought that maybe using them like non-heated rollers á la Cher would have a voluminous effect. But when I took them out, I was disappointed that my locks looked exactly the same.

Cher is also seen having some subtle, pink eyeshadow applied to her eyelid. I picked Lime Crime's "Shell," from the Venus: The Grunge Palette. I used this little brush to try to get as close to Cher's experience as I possibly could. I wouldn't normally use it to apply eyeshadow, because I had previously thought that with it being so wide, I wouldn't have as much control over it. Although this was true, it did manage to pick up quite a bit of eyeshadow and distribute it fairly evenly. As previously mentioned, I feel as if lighter or pastel colors work well with my coloring, so I thought the pink eyeshadow looked rather lovely. I'll definitely be wearing it again!

To complete Cher's evening party look, I tied my hair back in a neat bun with some wispy hairs let loose around my face in a classic Cher move. After this, I applied a Boots Natural Collection Moisture Shine Lipstick in "Crimson" to emulate Cher's rouge pout.

As a whole, I wasn't a huge fan of this look but I really liked the individual elements. I thought the red lips and the bun worked really well together, but the addition of the pink eyeshadow made me feel too feminine and a little Barbie-esque. This combo may have looked better with a smoky eye or metallic eyeshadow. I also think the bun and the pink eyeshadow would work well with a clear lip gloss or a nude lipstick, to channel a chic ballerina style. Altogether, this was a bit too much and verging on in-your-face sexy. I'd definitely wear the bun paired with the eyeshadow or with the lipstick again, though.

Will I Be Clueless Again?

I thought this experience was way existential and it made me question my own rather basic beauty routine. It's funny: I remember watching Clueless as a teen, and wishing for nothing more than to look as put-together and "flawless" as Cher. But 10+ years down the line, I realize that her "flawless" look isn't really my "flawless" look. From the hair flipping to the '90s brown lipstick to the evening look, I didn't feel super comfortable emulating Ms. Horowitz — mostly because I didn't feel like me. And while I can definitely see how 16-year-old Phoebe would've loved nothing more than to look like Cher on date night, 26-year-old Phoebe far prefers the ponytail and light pastel shadow. But maybe that's the point? To emulate someone whose look you admire doesn't necessarily have to mean copying them step by step. But rather, taking elements of their look that you love and making them yours.

Of course, Cher's beauty looks are totally classic, and will undoubtedly live on for years to come. They're also an awesome remedy for any clueless Betty's out there. If you think Cher was the chicest, emulating her look was definitely doable. And it can totally be taken from school to the party. But if, like me, you're slightly more low-maintenance, I'd recommend sticking to your own thing. That's kind of a good life mantra anyway, right?