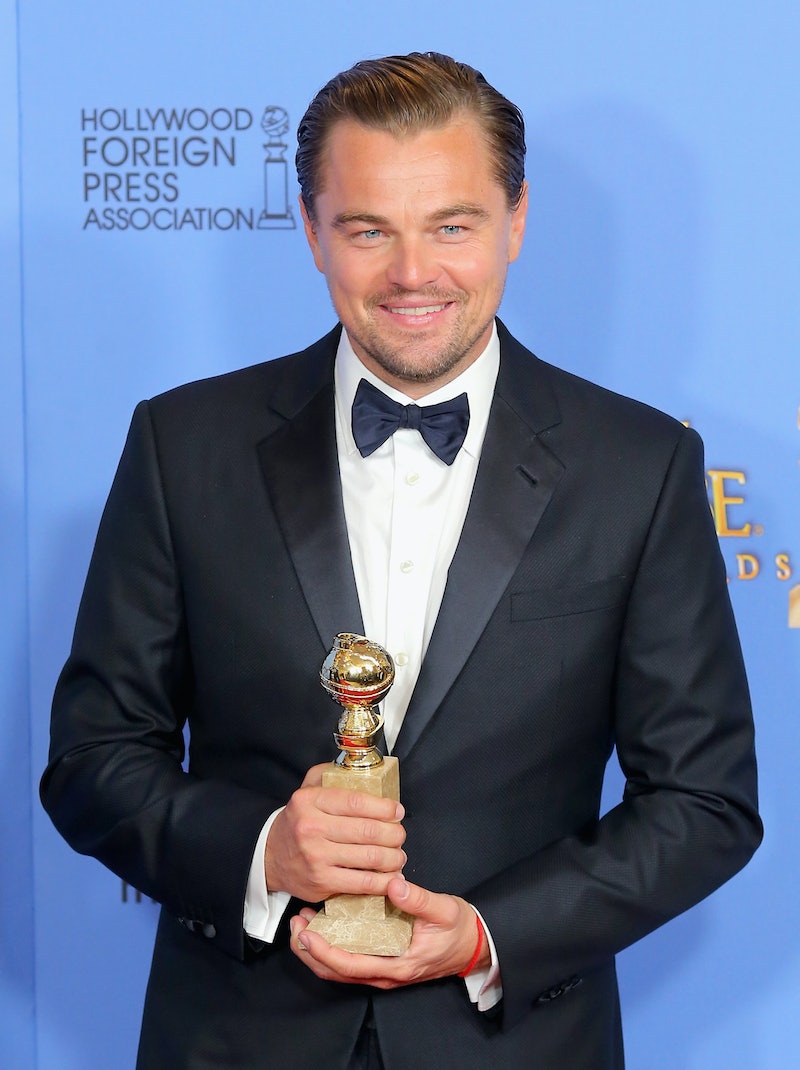 When it comes to Leonardo DiCaprio's personal life, there's no doubt his fans want to know everything. Unlike some celebrities, he isn't one to kiss and tell, especially when it comes to his long list of ex-girlfriends. But that doesn't mean people aren't going to ask the Golden Globe-winning actor about when or if he'll ever get married and start a family. Regarding the latter, The Revenant star isn't giving a straight-forward answer. While chatting with Rolling Stone, Leonardo DiCaprio's response about having kids, well, it says a lot.

After being asked if he even has time to have children, he said,

Do you mean do I want to bring children into a world like this? If it happens, it happens. I'd prefer not to get into specifics about it, just because then it becomes something that is misquoted. But yeah. I don't know. To articulate how I feel about it is just gonna be misunderstood.

The 41-year-old actor definitely didn't give a "yes" or "no," but rather provided a response that speaks volumes. First, his "if it happens, it happens" statement mirrors his stance on marriage. In January, he told Parade magazine about marriage, "That time will come when that time comes. The truth is, you can’t predict marriage. You can’t plan it. It’s just going to happen when it happens." That kind of sounds like what DiCaprio's is also saying about having children, but there is so much more to it.

In my opinion, it appears that he does want to become a father one day, but it's a decision he isn't taking lightly. I think that's a feeling a lot of people have when it comes to deciding if you ever want to bring children into the world. Becoming a parent is not only a big decision, but also a huge responsibility. And it seems that the world today particularly is influencing the Titanic actor's thoughts about starting a family.

Let's face it, at times the world isn't an all-around great place. Gun violence is still a major issue, women still don't get paid as much as men, there are things like Netflix's Making a Murderer showcasing just how badly our justice system might truly be, among many, many other horrible things that happen on a daily basis. Not to mention, how much our environment and planet is in peril, which is a cause close to DiCaprio's heart.

When you look at all of the bad things in this world, it can be a lot to stomach when it comes to deciding to have children. Of course, maybe this isn't what DiCaprio is saying at all, but he sure seems to be alluding to just that, and I can't blame him one bit. Would it be better to not have kids at all rather than raising them in a world that can be really screwed up at times?

Now, his remarks to Rolling Stone about wanting kids are quite opposite of what he told Parade in 2008. He said, "I want to get married and have children. In saying that, I realize I am contradicting everything I've said before. I absolutely believe in marriage."

That was eight years ago, and a lot can happen over eight years. Maybe he changed his mind? Maybe he still feels the same? Maybe he is taking another extra hard look at what would be a life-changing moment?

Clearly, the five-time Oscar nominee has much more to say, but is choosing to remain mum in fear of his views being taken out of context and being misquoted. It's one thing to allude to what you mean, but another to come right out and say, "Yeah, I'd love to have kids" and then list off the exact reasons he's hesitant about it.

Whatever the case, starting a family appears to be something DiCaprio takes seriously. Don't get your hopes up for an mini-Leo's or Leonora's walking around anytime soon.