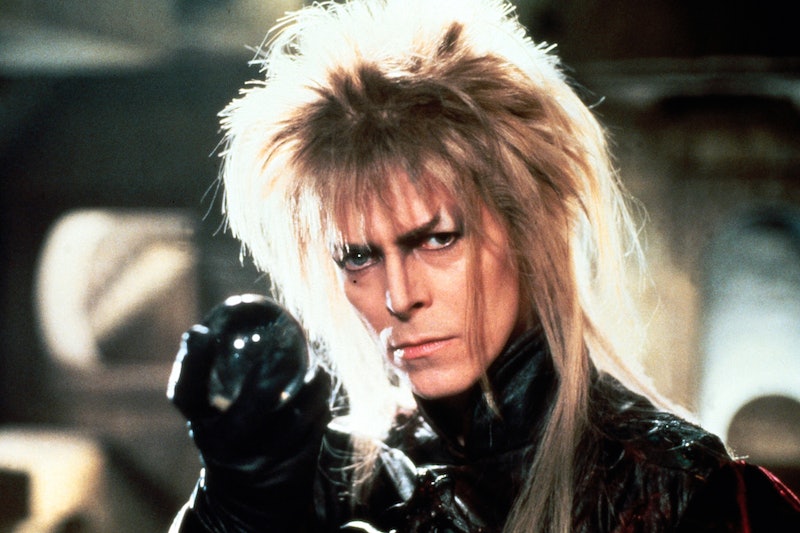 When the news broke late Sunday evening that David Bowie had died of cancer at the age of 69, I had already gone to bed after watching the Golden Globes. So when I awoke Monday morning to the sad news, my social media feeds were already flooded with images, music videos, and tributes to the late, great legend. But my immediate thoughts didn’t go to any one persona Bowie had taken on during his career, or any specific song or album he had released. Rather, my sadness homed in on one particular memory, from one particular era of Bowie’s career: Jareth, the Goblin King from the 1986 Jim Henson film Labyrinth .

It's not that the film made Bowie a star; he had been a talented and famous musician and actor for years before his appearance in Labyrinth. His musical career ran the gamut from art rock, to glam rock, to electronic, to jazz. And as far as personas went, Bowie had several: Ziggy Stardust, Aladdin Sane, The Thin White Duke. With a legacy so eclectic, fans of every generation have that one album, that one persona, or that one song that got them hooked on Bowie. But for many people of my generation, older millennials born in the early 1980s, our first contact with the man who fell to Earth was through the character of Jareth in Labyrinth, a wacky kids movie from Jim Henson that utilized his famous creature shop.

Bowie's involvement in the film made sense; his prior experience in elaborate costumes and extravagant personalities made him perfect for a character that ruled over a magical land of goblins and fairies, uninhibited by the passage of time. The songs he wrote for the film fit into the pop of the era, but featured intriguing twists of weirdness that only he could bring. For many young women and men, Bowie’s presence in the movie also provided a bit of a sexual awakening. The forbidden flirtation between his character and Jennifer Connelly’s teenage Sarah had just enough tension to kick some libidos into gear. (Bowie’s tight-as-heck pants didn’t hurt, either.) Even more, Jareth's androgyny resembled the gender fluidity that Bowie was embracing himself, resulting in people of all orientations developing giant crushes on the Goblin King.

Labyrinth became a cult classic, with a devoted following throughout the '80s and '90s. Yes, it was a critical failure, with the CGI outdated and the music of a bygone pop era, but countless members of the older millennial crowd had a connection to the film at one point or another. And for many of us, this is how we became Bowie fans. Realizing that the guy behind Jareth’s giant blond wig, intricate eye makeup, and ornate costume was an amazing musician who, well, also really enjoyed wearing wigs, makeup, and costumes, is what led us to dig into his discography. That’s where and when we discovered the personas and music that so many Boomers and Xers had years before.

Not every musician manages to transcend generations. I have to wonder if Bowie’s ability to successfully do so was because of his willingness to partake in the zeitgeist of the day and appear in Labyrinth. Because of his faith in Jim Henson and the strangeness of Labyrinth, an entirely new generation of fans were exposed to him, and it led them to embrace him for the whole of his career.

And Labyrinth wasn’t the only time in Bowie's film career where he made choices that reflected how he was always sort of ahead of the game by choosing projects that would turn into cult classics, making films that touched on relevant topics, or directors that later blew up. Thanks to having studied avant-garde theater and mime before ever making it as a musician, his film choices were just downright cool. In Tony Scott’s The Hunger, Bowie played a vampire alongside Catherine Deneuve and Susan Sarandon. He reinterpreted Pontius Pilate for Martin Scorsese’s The Last Temptation of Christ. And before Christopher Nolan became a household name, Bowie acted for him in one of his most memorable roles yet, as inventor and physicist Nikola Tesla in The Prestige. Bowie’s own peculiarities reverberated through the character.

Losing an artist of his incredible talent hits fans hard, and naturally those of different eras, scenes, or fandoms will gravitate towards the artworks that personify the artist for them. In light of Bowie’s death, some may be playing The Rise and Fall of Ziggy Stardust and the Spiders from Mars or Let’s Dance. Tonight, I’ll be popping my Labyrinth DVD and remembering my first time getting lost.

More like this
Cruz Beckham Teased New Music With An Adorable Nod To Mom Victoria Beckham
By Stephanie Topacio Long
The Spice Girls Are Set To Reunite At King Charles III’s Coronation
By Sam Ramsden
Zach Gilford Admits He Forgot Taylor Swift's Name When He Starred In Her Music Video
By Jake Viswanath
David Beckham’s Controversial Qatar Deal Skyrocketed His Net Worth
By Catharina Cheung
Get Even More From Bustle — Sign Up For The Newsletter
From hair trends to relationship advice, our daily newsletter has everything you need to sound like a person who’s on TikTok, even if you aren’t.