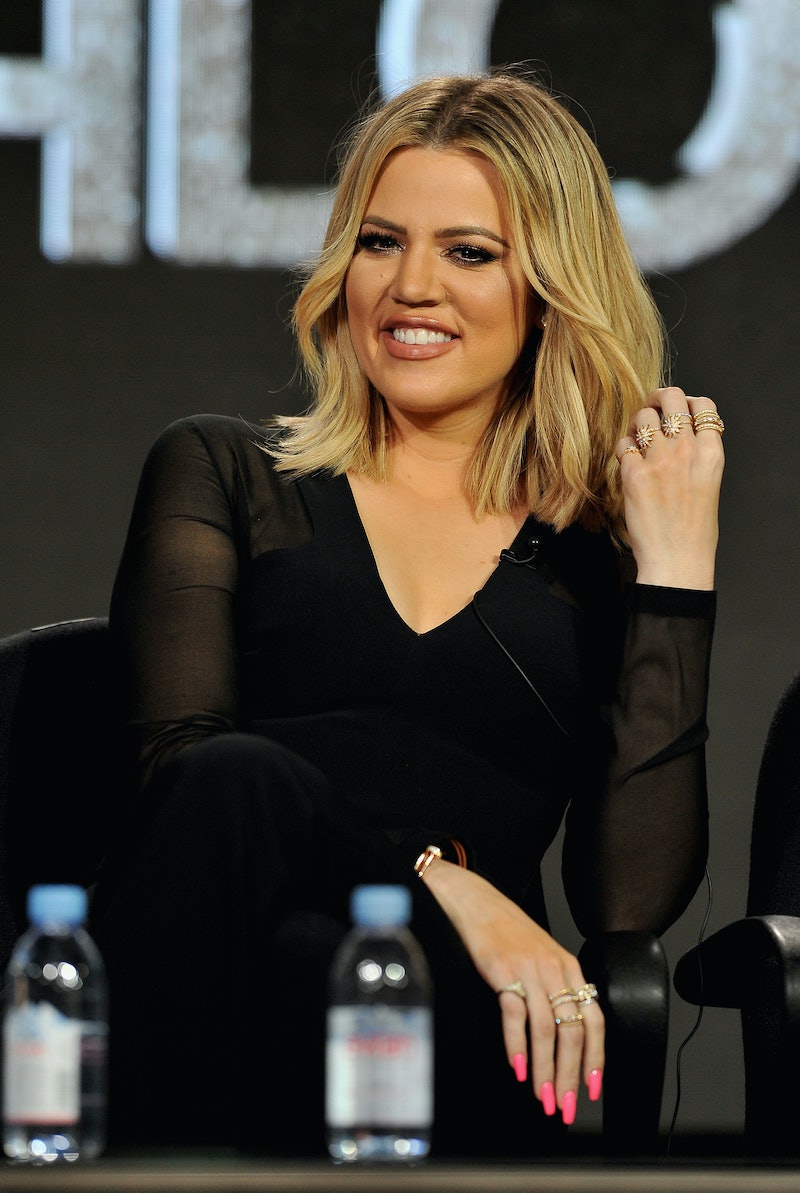 Just in case she's not already all over the Internet, Kylie Jenner is taking on another platform. The 18-year-old started hosting a radio show on her app. She invites friends and family members over to spill their guts. In the latest episode, which aired live Wednesday night, Jenner was joined by big sister Khloé Kardashian. That's unsurprising, until you hear who else was there — Kardashian's ex-boyfriend French Montana. When explaining why this isn't as awkward as it sounds, the Kocktails With Khloé host said,

Honestly, when you really think about it, that makes perfect sense. If there are no bad feelings there, why not stay in each other's lives? As a refresher, Kardashian and Montana dated on-and-off from July to December 2014. The relationship was short-lived, but she appeared in his "Don't Panic" music video. After the couple broke up, Kardashian talked about Montana in an episode of Kourtney & Khloé Take The Hamptons. She said,

It's nothing against French. I just think I don't want a boyfriend. I jumped into something because I was just, like, lonely and destructive. But now I'm like, I just want to be alone.

Even reading those comments now adds context to why it's really not that bizarre that he appeared on Jenner's radio show. Their relationship was short-lived, because she hadn't really processed all that happened with Lamar Odom. (At the time, it had only been a year since they filed for divorce.)

Since Kardashian and Montana split, he's been spotted hanging out with another family ex, Scott Disick. Last November, Montana also took a photo with Kourtney Kardashian at a club, even taking a dig at Disick in the caption. I guess once you're part of that family, you're never really gone. (Unless you're Kris Humphries; he's probably excommunicated from the whole group forever.)

When I first saw photos on Instagram of Montana posing with Jenner on Wednesday night, admittedly I was a bit confused, especially since Kardashian is dating James Harden. My immediate reaction was, "Wait, what?!?!" Now it totally makes sense with this added context.

Considering Kardashian has been a huge source of support for ex Odom as he continues his long recovery, she seems like the kind of person who lets her heart dictate her actions. In the sense that she's compassionate and won't leave someone hanging if they really need her, even if they're her exes.

Sure, it's unconventional that Kardashian is buddy-buddy with her ex-boyfriends, but that doesn't have to be a bad thing. Leave it to the reality star to drop the mic and prove these types of situations are only as awkward as you make them.