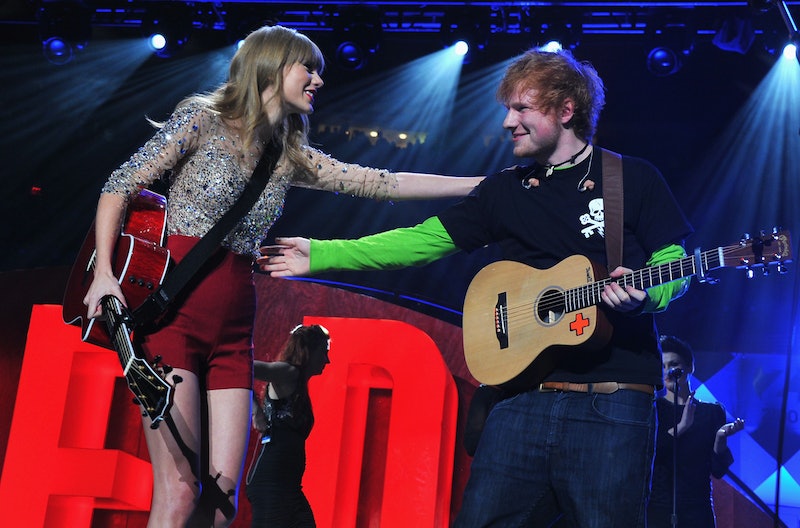 Anyone who tuned into Monday night's Grammys will remember the look of shock and pride that Taylor Swift had when her BFF Ed Sheeran won Song of the Year. Sure, she perfected her surprised face at many award shows prior, but this time was different — it wasn't about her winning at all. Instead, she couldn't have been happier for her friend. Although people joke about T. Swift and her squad, there's something to be said of having such genuine friendships. Continuing the trend of supporting Sheeran, the "Wildest Dreams" singer shared the sweetest birthday post on Wednesday night. It was basically the size of a short novel, so here's the first part:

Looking back on the highlights of my life, there's a moment I'll never forget from a day in London about two years ago. I was in town to play the O2 and I was out shopping on my day off. My friend Ed Sheeran met up with me in this little shop where I was buying ballet shoes. He walks in and says "you have to hear this new song. I think it's the best one I've ever written." And then, as usual, he pulls out his phone and gives me headphones.

Does Tay have a way with words or what? I can practically picture the two of them hanging out in England and this all going down. Also, of course she was buying ballet shoes. It's like the "Shake It Off" video come to life.

Instead of building too much suspense about what happened after she put the headphones in, here's the next excerpt of the 26-year-old's post:

I sat there on a bench in that store and heard "Thinking Out Loud" for the first time, as little kids were picking out tutus and leotards next to us. Little did we know it would go on to be first dance song at countless weddings all over the world, become Ed's biggest hit, and eventually go on to win him Song of the Year at the 2016 Grammys.

I can just picture her sitting on a bench with a whirlwind of kids buying ballet supplies around them. It's also sweet to imagine the song's humble beginning, considering just how huge it has become. I love that Tay pretty much walked us through the way the song came to be.

In case you're already melting from the sweetness of this post, there's more. Swift really knows how to make someone feel special on their birthday. Here's the end:

Ed and I had been on tour together all year on the Red Tour and we saw each other almost every day. I lived for the moments he would burst into my dressing room with a new song to play me. It happened so often that it became normal, and I don't think he ever knew how much it meant to me that he wanted me to hear his songs first. I don't think he ever knew how inspired I was by his drive and passion to constantly create new art. But it's his 25th birthday today, so I'm saying it now. You deserve everything you have, and everything you will continue to achieve, Ed.

You know it's a special bond when Sheeran wants her to listen to all of his songs first. Plus, it's great that they inspire each other. The fact that she says he deserves everything he has is equally awesome, because it's the same tone she conveyed in her own Grammy acceptance speech: how you shouldn't let others try to take credit for your work or accomplishments.

These two have come so far, since the days of "The A Team" and "Teardrops On My Guitar." Granted, those songs were hits in their own right, but it's not quite the same as having a Grammy to show for all your hard work. It's really great to see Sheeran and Swift have each other to cheer on along the way.

So happy (belated) birthday, Ed! With friends like Swift and a brand-new Grammy, I think he already got the best birthday gifts possible.

More like this
Taylor Swift Fans Caught A Possible ‘1989’ Clue In Her Latest Awards Show Speech
By Grace Wehniainen
Sadie Sink Would Escape Vecna From 'Stranger Things' With This Taylor Swift Song
By Grace Wehniainen
What Is Ariana Grande's Net Worth? When It Comes To Money, She Has No “Problem”
By Hugh McIntyre
Lily Allen Was “Quite Emosh” After Performing Sober At Glastonbury Festival
By Stephanie Topacio Long
Get Even More From Bustle — Sign Up For The Newsletter