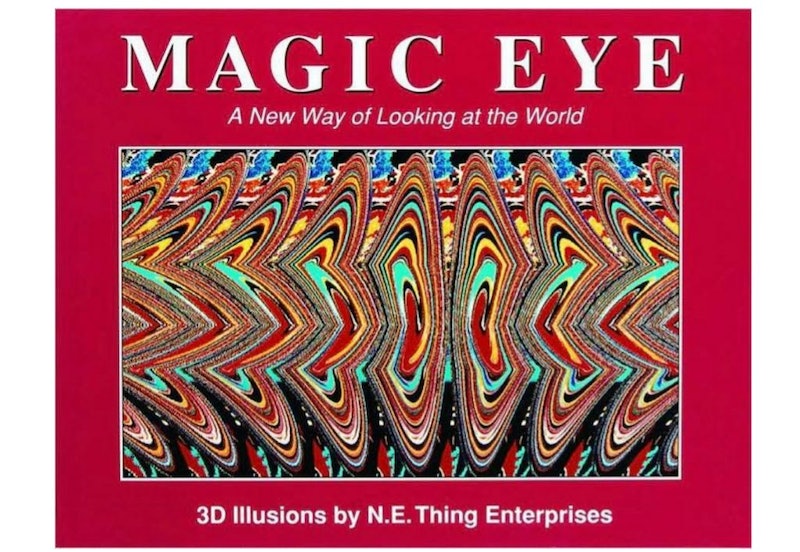 Trends come and go, but sometimes, they don’t disappear entirely — they just change form, evolving slightly to keep up with the changing times. Such is the nature of these ‘90s equivalents to 2016 trends: They’re the forerunners of an impressive number of common, everyday things that most of us can’t imagine life in 2016 without. Think of them as the OG… whatever.

Some of the ways these trends evolved may be more obvious than others. It’s easy to see, for example, how wristwatches that can do basic arithmetic for you later became wristwatches that can run your entire life for you; however, it’s a little more difficult to deduce how Magic Eye pictures became all of those controversies over oddly colored pieces of clothing. I suspect what each OG-current trend pairing comes down to, though, is a fondness for the basic ideas at the root of them all: Easily accessible technological tools, for example, or mind-bending optical illusions. It’s just the presentation of these ideas that changes — the set dressing, if you will.

We’re predictable creatures, us humans are; the things that amaze us never stop amazing us, no matter how old they might actually be. In the grand scheme of things, the ‘90s versus 2016 are a drop in the proverbial bucket — but I’m curious as to how these basic ideas might look in, say, 50 years’ time. Or 100. Or 1,000, even if I’m not actually around to see them anymore. But hey, maybe we’ll finally have cracked cryogenic freezing and reanimation by that point, so you never know, right?

1. Instead Of Emoji, We Had Emoticons

Back in my day, we had to type out our pictorial representations of our moods by hand! One character at a time!

2. Instead of Netflix and Chill, We Had The Old I’m-Just-Stretching-WHOOPS-Did-I-Just-Put-My-Arm-Around-You? Manoeuver

So smooth. So classy.

3. Instead Of One Direction, We Had NSYNC And The Backstreet Boys

And 98 Degrees and O Town and so on and so forth… but in the great Battle of the Boy Bands, let’s face it: There were only two real contenders.

Also I realize that boy bands and pop idols have been around for much longer than the ‘90s — the Beatles might even arguably be considered a boy band — but, well… there are no boy bands like ‘90s boy bands. There just aren’t.

4. Instead Of Hover Boards, We Had Rollerblades

If you were a child in the early 2000s, I suppose the equivalent here would actually be Heelies — those shoes with the wheels built in — but I missed that train due to the fact that I am an old fogey. Rollerblades, however? Heck. And yes.

We also had Street Sharks, so... there was that.

5. Instead Of #TheDress, We Had Magic Eye Pictures

I would argue that Magic Eye pictures were cooler, but that’s just me. I highly recommend trying this one out, by the way; fun things happen to a Magic Eye picture when you turn it into a GIF.

6. Instead Of The Pumpkin Spice Latte, We Had The Plain Ol’ Frappuccino

I mean, we still have the Frappuccino — clearly our love for frozen coffee beverages hasn't gone anywhere over the years — but at the time that the drink made its nationwide debut in 1995, the masses embraced it with the same enthusiasm that would later characterize our love of the Pumpkin Spice Latte. Remember when Fraps only came in Coffee and Mocha flavors? There wasn’t even any whipped cream. My, how the times have changed.

7. Instead Of Smartphones, We Had Palm Pilots

Or PDAs (by which I mean “personal digital assistants,” not “public displays of affection”), if you want to get a little less brand-specific. The very first PDA actually entered the market in 1984 in the form of the Psion Organizer; it wasn’t until the 1996 release of the very first Palm Pilot, however, that PDAs entered the mainstream. Smartphones pretty much killed the PDA, though — they do everything our good ol’ Palm Pilots used to do and a whole lot more.

8. Instead Of Jessica Jones, We Had Buffy Summers

But both are pretty awesome, so everybody wins.

9. Instead Of Snapchat, We Had Pictionary

Or, if you preferred your games to be of the show variety, Win, Lose, or Draw . (Good to know Jimmy Fallon is carrying on the torch there). While it’s true that Snapchat isn’t strictly a game in the same way either Pictionary or Win, Lose, or Draw were, the launch of that whole trophy case thing brought it a tiny bit closer to that sort of territory—and besides, the point was still the same: To communicate a message to someone else via crudely drawn stick figures.

10. Instead Of The Power Brow, We Had… Whatever This Is

I find it strangely fascinating that “eyebrows on fleek” are pretty much the exact opposite of whatever the hell you call the super thin, penciled-on look of ‘90s brows (which Drew Barrymore had totally mastered at the time, thereby making her the '90s Cara Delevingne. Speaking of, I’ll admit that I’m not totally sure what the precursor to “on fleek” was. "Smokin’," said The Mask-style, maybe?

11. Instead Of The Apple Watch, We Had Digital Watches That Were Also Calculators

As far as we knew, wearables like the Apple Watch would only exist in the very, very far future. Or on the Starship Enterprise. Maybe both. At the same time.

12. Instead Of 3-D Printing, We Had Those Little Springs You Made Out Of The Edges Of Dot Matrix Printer Paper

OK, yes, not totally the same thing; I realize that 3-D printers don’t bear a whole lot of resemblance to regular paper printers. Still, though: Those little springs existed in three dimensions, and they came from a printer, so… just work with me here, all right?

“The Internet” in 1993 meant something veeeeeery different from what “the Internet” means in 2016.