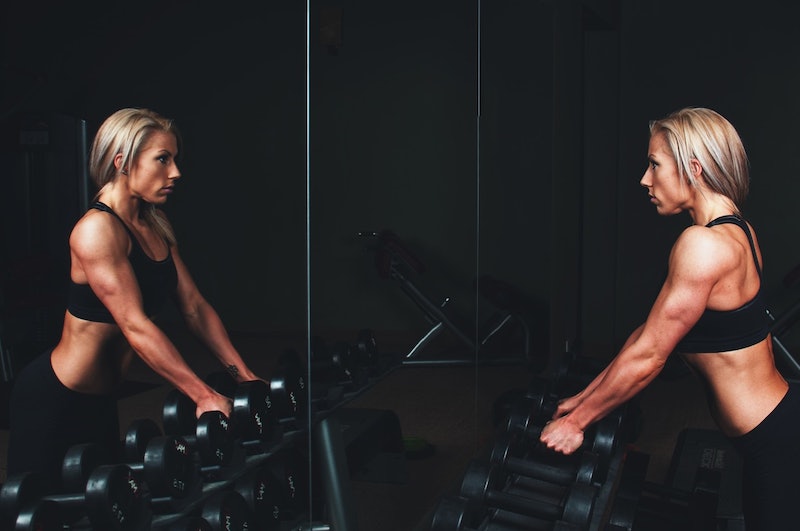 Whether you struggle with anxiety and depression or not, it's important for all of us to know which habits to avoid for the benefit of our mental health. Not only can the state of your mental health affect everything from your career to your relationships to your overall happiness, but your mental health is directly tied to your physical health. On top of that, most of the habits that can be detrimental to mental health — like frequently checking your phone for work emails, hitting the gym daily, and dieting — actually might seem healthy and responsible. Because of this, even if you feel like you've got your mental health on track, you should still be aware of all the sneaky ways you could be sabotaging your mental health regardless.

Personally, my mental health hasn't been the best lately. Between the worries and general loneliness that come with adjusting to a new city, (especially when that city is NYC), the low-light and frigid cold of Northeastern winters, stressing out over my taxes, and simply not getting laid as much as I'm accustomed to, my symptoms of anxiety and depression have been really difficult to deal with lately.

What's worse, though, is realizing how many ways I've been unintentionally sabotaging my mental health lately with these bad habits — some of which I didn't even realize were bad. If your mental health has been suffering lately, too, then read on.

1. You're Sitting Too Much

Sitting too much can negatively impact your mental health. This may not come as a surprise to you, if you, (like me) have days where nothing calms you down except a trip to the gym or a walk in the park. In case you're unaware, though, you should know that research suggests sedentary behavior increases anxiety. These findings were discovered when researchers in Australia at Deakin University's Center for Physical Activity and Nutrition Research reviewed nine studies on the correlation between anxiety and sedentary behaviors, like watching TV and working at a desk all day. In five of the nine studies, researchers found an association between sedentary behavior and increased anxiety. In four of the nine studies, how much time people spent sitting also seemed to be a factor in predicting their mental health.

Of course, if your job requires you to work at a computer, then sitting is literally part of your job. That said, there are ways you can do your work without sitting all day. If you can afford it, consider ordering a standing desk or an adjustable laptop tray so you can switch back and forth between sitting and standing while you're working. If that's out of your reach right now, then try to take mini-walking breaks throughout your day — even if it's just to walk to your office's water cooler and back. Or, if you work from home like I do, keep your yoga mat next to wherever you're working so you can take mini-yoga breaks throughout the day.

2. You're Overdoing It On Caffeine

Yes, coffee can actually be really good for us when used in moderation, but excess caffeine consumption has been proven to increase anxiety — and increased anxiety will definitely wreck your mental health. As Everyday Health explained in their article on the subject, "caffeine stimulates your 'fight or flight' response, and studies show that this can make anxiety worse and can even trigger an anxiety attack." So do your mental health a favor, and try to keep your caffeine intake to a minimum. Because, believe me, that third espresso just isn't worth it.

3. You're Exercising Too Much

Now here's one that's more surprising. I'm sure you don't need me to tell you how beneficial regular exercise is to maintaining both mental and physical fitness. Not only does regular exercise reduce the risk of developing heart disease and cancer, since exercising boosts our serotonin production and releases endorphins, it's hands down one of the best ways to fight anxiety and depression naturally. However, even with exercise, moderation is key. As Greatist explained, " regularly pushing ourselves past the brink of what our bodies can handle (including exercising on top of heavy demands at work, relationship or social drama, and other life pressures) skyrockets stress hormones and can mess with our moods."

So if you've been overdoing it at the gym lately, you're really not doing your mind — or your body — any favors. If you've been extra tired lately, you've been having difficulty falling asleep and/or staying asleep, or you just can't seem to focus, then you're probably over-exercising. Scale back, and don't feel guilty about it. Your mental health will thank you.

4. You're Spending Too Much Time On Your Phone

I think we can all agree that smartphones are basically magic. When used in moderation, smartphone apps can even help us take charge of both our mental and physical health; they might make it possible for us to move our offices outdoors on nice days, and they help us keep in touch with our favorite people. That said, if you're overdoing it on social media, or using your phone right before bed, it could be messing with your mental health.

Most of us have become so attached to social media, texting, and cell phone use in general that studies from the University of Maryland have actually shown abrupt reduction of cell phone use results in withdrawal symptoms. Moreover, as Harvard Health pointed out in one of their posts on the topic, the blue light emitted by smartphones can interfere with our sleep and increase our chances of developing depression. So, even though it can be really hard to cut back on smartphone use, (especially when you're alone a lot), it's crucial for your mental health that you try to do so.

5. You're Going To Bed Super Late

Whether your social life is keeping you up at night — or you're like me and have been going to bed past midnight lately simply because you're currently binge-watching House of Cards on Netflix — then you already know getting to bed at a decent time can be challenging. Evidently, though, going to bed after midnight is just one more relatively normal habit that could be messing with your mental health. Greatist reports that, according to one study, the later students went to bed, "the more likely they were to suffer from negative thoughts, ruminative worries, and overall low moods than those who achieved lights out on the earlier side."

What may be even more discouraging, though, is the fact that late bedtimes seem to negatively impact mental health regardless of how many hours self-proclaimed night owls manage to sleep. As Greatist explains, "regardless of how many hours they sleep, adults and teens who identify as night owls report feeling more tension, pessimism, and depressive symptoms than their early-bird peers." If this sounds like you, try to go to bed earlier from now on. (I know, I know, but it's important for your mental health to at least try.) Here are a few tips to get you started.

6. You're Dieting Or Stressing

Obviously, eating healthy is never a bad idea. Moreover, eating the wrong foods can actually worsen anxiety and depression symptoms. However, obsessing over calories, worrying too much about avoiding "bad" foods, and putting too much pressure on yourself not to cheat on your diet can do more harm than good.

In fact, studies show that low-calorie dieting can actually increase our cortisol levels. Since cortisol is literally a stress hormone, and can contribute to the development of diabetes and depression, it's important to both your mental and physical health to keep your cortisol levels in check. I'm not saying you shouldn't strive for a healthy diet, but don't overthink chowing down on the occasional pint of ice cream, either.

7. You're Drinking A Lot

I get that drinking is fun. I love beer, I enjoy most Missouri wines, and when I have a cold, whiskey is my preferred cold medicine. Unfortunately, though, drinking alcohol stimulates our bodies to release cortisol into our bloodstreams. And as we've already discussed, cortisol is no joke.

Booze may chill you out initially, but overdoing it on the stuff can actually make you more susceptible stress. Plus, drinking excessively has actually been shown to interfere with REM sleep and your immune system. So while you definitely shouldn't feel like you can't indulge in your favorite adult beverage now and then, you should probably avoid getting wasted as much as possible.