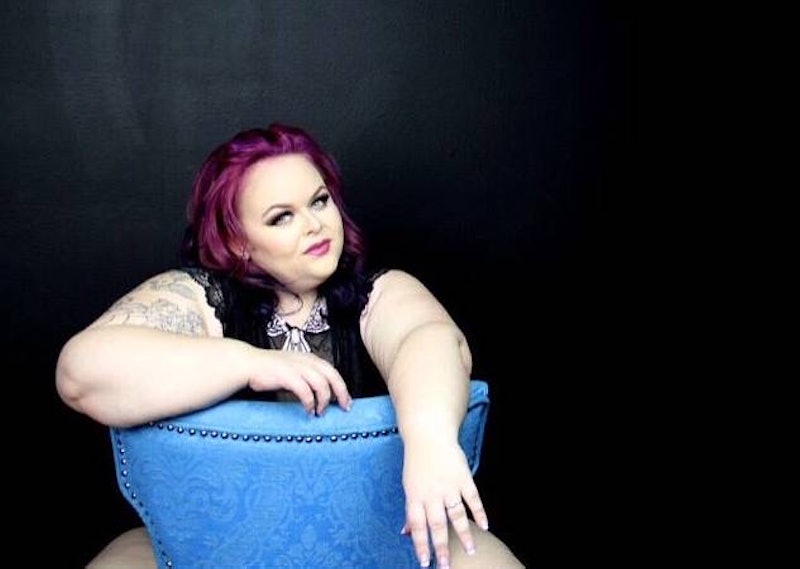 It's been a history-making year for curve and plus size modeling already. From Nadia Aboulhosn's Women's Running cover to Tess Holliday's clothing line, much of the world is finally paying attention to the unique group of women often championed by facets of plus and body positive communities. But — to probably no one's surprise — there are still a lot of awful things many plus size models hear day to day. Whether from those who have a problem with all humans above a size 10, or those who just don't agree that plus size modeling should be a thing, these messed up comments are almost unavoidable.

The Internet gives everyone with a computer or smartphone the chance to share their opinions, and unfortunately, those opinions are sometimes upsetting or disturbing, if not entirely misinformed. As well as being able to voice your opinion on the Web, you're also not usually expected to back up said opinion with any facts. Comments like, "You're going to die at 30," are not only misguided and factually unjustified, but can spread false information to anyone who might read them. Hate breeds hate, but hopefully there's enough self-love in this world to fight back against these kinds of trolls.

I reached out to some women in the curve and plus modeling scene to find out the most messed up comments they've heard throughout their careers. And there seemed to be one common thread amongst all the hatred: fatphobia. Here's what they told me.

Isabel Hendrix is a model, blogger, and body positive proponent who unashamedly spreads self love in all her rainbow glory. IMO, she's a figure that is pretty impossible to hate. Unless, of course, you're a body shaming Instagram dweller with nothing better to do than try to cause controversy. Hendrix tells me via email that the worst thing about the messed up comments she receives is that they're at polar ends of the spectrum.

One person may comment, "You don't LOOK plus size (or) you are too small to be plus size," while the comment below it will read, "You're so fat and disgusting."

However, Hendrix is understanding, and discusses the issue calmly. "I am almost six-feet tall, so yeah maybe if you minimized me down like you can to images on computers I would wear a size medium. But the fact is I wear a size XL/XXL and people somehow think they know better than me when all they've seen are pictures of me."

While there should be more visibility for women sizes XXL and above in fashion, Hendrix makes an amazing point. Some of these commenters seemingly try to rob models of their identity, shaming them for what they look like and even trying to diagnose their health. But they don't actually know the women they're talking about. Because of that fact alone, discussions of people's "concern for someone's health," or fear that someone is not a "role model" because they are plus are inherently flawed. "In reality, these people who are going on health crusades are worse for fat people's health than the weight of fat people," Hendrix adds, sending me the infographic above.

Lornalitz Baez is an up-and-coming curve model already making waves with her championing of #curvyfit — a hashtag that celebrates those who are simultaneously curvy and fit. The comments she's heard, such as "your face is your best asset" or "your body photographs so fit and toned for a size 12/14" imply not only that a fuller-figured person's face is always more attractive than their body, but that in order to be accepted as a plus size person, you must also be devastatingly beauty, with proof that you are living a "healthy" lifestyle. These things simply aren't required of straight size people in order to avoid hateful commentary.

Fuller Figure Fuller Bust blogger Georgina Horne's response was a little different amongst the negative commentary other women have received. Whether it's because Horne has cultivated such a strong, supportive following or because body positive rhetoric has permeated plus size modeling in a big way, she says, "I don't think I've ever had a bad experience!" I can only hope that this becomes the reality for all curve and plus size models one day.

"I think too often that people's feelings — skinny or plus — are wrapped up in how they feel about themselves when it comes to the images they see online and in magazines," Sabrina Servance tells me via email. "They forget that we are real people too." Regardless of someone's celebrity status, they're still likely to feel hurt by negative commentary. There's no off switch to emotions that become easy to press when you are thrown into the public eye, even though I'm sure many stars wish there was.

However, Servance's negative comments haven't been limited to the Internet — an important thing to note, since it proves that body shaming is still alive and ingrained offline. "I showed up to a set once and another model said she was happy that she wasn't the biggest model there," she says. "Another time someone said I wasn't a real model and that plus size modeling is just a fad."

As easy it can sometimes be to dismiss trolls online, we have to remember that there are real people behind those comments, many of whom genuinely believe the toxic views they're spreading. Body positivity needs to be a movement on the streets just as much as on our screens.

Perhaps one of the biggest names in the plus size modeling game, Tess Holliday shot to fame in 2015 after being signed to Milk Management, and has remained there ever since — even making TIME's "Most Influential People On The Internet" list. Because of the unique nature of Holliday's fame and career (she's the only mainstream model above a size 22), it's no wonder that she has experienced negativity. Those on the cusp of a revolution always do.

Of all the messed up comments that Holliday has received, she finds the ones about her health the most disturbing. Among them, statements like, "Congrats on having a heart attack in 10 years," and "you promote an unhealthy lifestyle." Such trolling is associating being plus size with being unhealthy in a way that can undoubtedly be damaging and emotional for anybody with a higher BMI.

Writer and model Kat Stroud sent me a detailed and disheartening account of the body shaming incident that stands out most to her.

When I first began modeling, I shot with a photographer who kept making comments like: "Have you tried just not being fat?" "Your face would be so pretty without that ugly double chin." "Oh don't worry I can Photoshop about 50 pounds from you — you'll never have looked better."

I couldn't believe it! Not only was this "photographer" shaming my body, but the fact he was photographing me while shaming my body left me feeling vulnerable and violated. This experience truly enraged me. How dare this man request to shoot me and proceed to tell me I was too fat? And all too sadly, these comments are considered OK and helpful — when in fact they are damaging and a form of bullying. This happens to plus models all too often.

Instead of being discouraged, I took his hate and turned it into motivation. I set out to prove [to] him, and everyone who doubted a plus size woman's capabilities due to her size, wrong. And as I achieve my success and continue to inspire my fellow plus size ladies to embrace their beauty, I can only hope for a more body positive tomorrow!

Kat Stroud's words are an inspiration to any plus size person — model or otherwise — struggling with negative comments about their appearance or lifestyle. We can turn the hate into motivation, prove people wrong, and embrace our individual beauty. Ultimately, there should be absolutely nothing about our weight that can stop us from achieving whatever we want to achieve. That's proven by the highly successful careers of these women.

Want more fashion and beauty? Check out the video below, and be sure to subscribe to Bustle's YouTube page for more hacks and tricks!

More like this
Why TikTok's 15-Minute Cleansing Challenge Isn't All It's Cracked Up To Be
By Rebecca Fearn
Here Are All 703 Outfits Rachel Wore On Friends
By Kat George
If Your Home Has Any Of These Problems, You'll Wish You Knew About These Clever Things Sooner
By Julie Peck
Here’s Your Daily Horoscope For December 2, 2022
By Mecca Woods
Get Even More From Bustle — Sign Up For The Newsletter